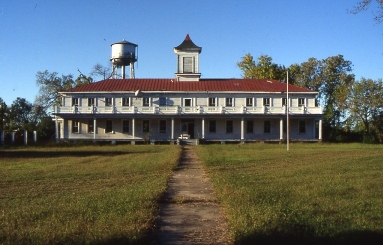 A short distance north of U.S. Highway 70, northeast of Millerton in McCurtain County, is Wheelock Academy, which functioned from 1884 to 1955 as a boarding school for American Indian girls, mostly Choctaw. The genesis of the institution dates to 1832 when a Christian missionary couple, Alfred and Harriet Wright, resumed the work they had earlier conducted among the Choctaw in Mississippi. The Choctaw removal from that state to present southeastern Oklahoma began in 1831. Sponsored by the American Board of Commissioners for Foreign Missions (ABCFM, Congregationalist) based in Boston, Massachusetts, the Wrights arrived in the West late in 1832 and soon established a mission station, school, and church. Wright chose the name "Wheelock" for the station, memorializing his friend and mentor, Eleazar Wheelock, first president of Dartmouth College.

At this site the Wrights resumed their Christian ministry, educational efforts, and medical care for the hundreds of Choctaw families who had settled in the vicinity. Harriet Wright took the lead as teacher, while her husband served as minister and self-taught physician to the suffering Indians. He also resumed his efforts to master the Choctaw language and to provide both secular and religious materials in the tongue for his followers.

The small "day" school flourished, but a need emerged for an on-site boarding service for orphans and children who were unable to commute to the day school. The Wrights first responded to this need by housing some students in their home or those of other mission members. A dormitory was built in 1839, and the functioning school was adopted as part of the Choctaw national school system in 1842 as the Wheelock Female Seminary. The seminary continued as a mission school, partially funded by the Choctaw Nation until all the schools were closed in 1861 at the outset of the Civil War. Reverend Wright had died in 1853 after years of suffering from a heart ailment. Ill health forced his widow to leave the mission a year later.

The Wrights left an enduring legacy of their ministry in the form of a substantial stone church built by their congregation in 1844–46. The seminary and most of the other mission buildings, including the wooden portions of the church, burned after the Civil War. In the early 1880s Choctaw national leaders decided to rebuild the school on a new site a few hundred yards northeast of the old mission station, school, and church. The present Wheelock Academy building was constructed, and a Choctaw orphanage was opened there in September 1884. Restoration of the stone church soon followed.

As the demand increased for educational service and care of more orphans and other children, the Wheelock complex expanded to accommodate the need. Begun with five buildings in 1884, including the still-extant main dormitory, Pushmataha Hall, there were eighteen buildings when the institution closed in 1955. The U.S. government had assumed jurisdiction over the school in 1910 and full control as well as funding in 1932. After 1955 the facility remained virtually abandoned until later returned to ownership of the Choctaw Nation. Neglected maintenance caused the wooden buildings to deteriorate rapidly, and fires and the ravages of nature reduced the complex to seven significant buildings in various conditions.

In the 1970s and 1980s the Choctaw Nation made sporadic efforts to restore some of the buildings. In 1998 the nation's officials initiated another effort to restore the surviving buildings for reuse. State and national historic preservation agencies declared the academy one of the state's and nation's "most endangered" historic places. Wheelock Academy received National Historic Landmark designation in 1965 and in 1966 was listed in the National Register of Historic Places (NR 66000949).

Natalie Morrison Denison, "Missions and Missionaries of the Presbyterian Church Among the Choctaws," The Chronicles of Oklahoma 24 (Winter 1946–47).

William L. Hiemstra, "Presbyterian Mission Schools Among the Choctaws and Chickasaws," The Chronicles of Oklahoma 27 (Spring 1949).

The following (as per The Chicago Manual of Style, 17th edition) is the preferred citation for articles:
Louis Coleman, “Wheelock Mission and Academy,” The Encyclopedia of Oklahoma History and Culture, https://www.okhistory.org/publications/enc/entry?entry=WH002.