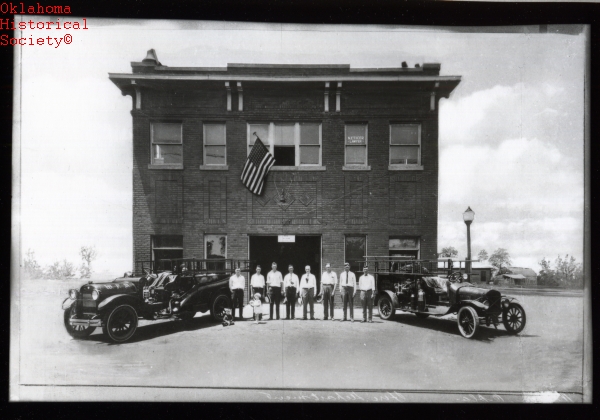 The Carter County town of Wilson is situated seventeen miles west of Ardmore, Oklahoma, just south of U.S. Highway 70. Originally known as New Wilson, a post office was established on January 17, 1914. The community voted to incorporate in 1914, and its incorporation under the name Wilson became official in 1918 by governor's proclamation. The area offered good land for agriculture. Principal products were cotton and corn; later, peanuts replaced cotton. However, oil would become a major factor in the growth of the town.

Wilson was named by John Ringling, son of August Rungeling, a Bavarian harness maker, as a tribute to Charles Wilson, manager of the Ringling Brothers Circus. John Ringling and Jake Hamon were involved in starting a new railroad as a commercial venture, and it soon began to haul heavy oil-field equipment. This union formed a combined effort for the Oklahoma, New Mexico and Pacific Railway, later a part of the Atchison, Topeka and Santa Fe Railway system. Railroad construction was begun in 1913, completed in 1914, and after a successful run was abandoned in 1976.

Jake L. Hamon, a Kansas lawyer, had come to Indian Territory to seek his fortune. He acquired extensive leases and royalties in western Carter County where he later made his fortune in oil wells and Wilson property. He reportedly purchased eight acres of land before the town was established. Hamon died in Ardmore on November 26, 1920.

Early businesses included forms of communication. In 1908 Dr. W. A. Darling setup the Darling Telephone Company. It was known as the Pioneer Telephone Company in 1915 and became part of Southwestern Bell Telephone in 1920. In 1914 the town's first bank opened, the Wilson News newspaper was printed, a post office was established, and churches were organized. Circa 1914 the population was estimated at two thousand.

The first official census for Wilson recorded 2,286 residents in 1920. Its population peaked at 2,517 in 1930. Following the Great Depression numbers plummeted to 1,700 in 1940. By 1950 the town counted 1,832 citizens. Through the next four decades Wilson's inhabitants numbered between 1,569 and 1,647. At the turn of the twenty-first century local amenities included the Historical Wilson Museum, a senior citizens organization, a mix of businesses, and prekindergarten-through-twelfth-grade schools. In 2000 Wilson had 1,584 citizens governed by an aldermanic form of town government. The 2010 census counted an increase to 1,724 residents.

The following (as per The Chicago Manual of Style, 17th edition) is the preferred citation for articles:
Greater Southwest Historical Museum and Carter County Genealogy Society, “Wilson,” The Encyclopedia of Oklahoma History and Culture, https://www.okhistory.org/publications/enc/entry.php?entry=WI021.