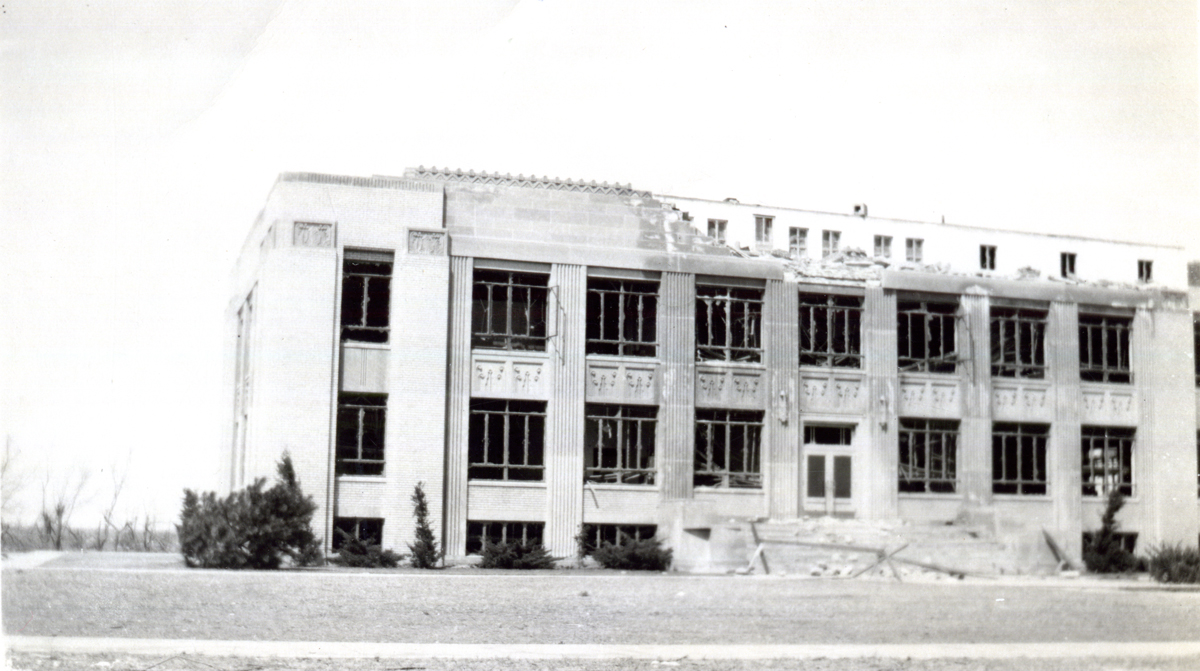 Located in northwestern Oklahoma, Woodward County encompassed 1,246.01 square miles of land and water area in the year 2000. Bordering counties include Harper and Ellis counties on the west, Dewey on the south, Woods on the north, and Major on the east. Woodward County is part of the Osage Plains, within the Western Red Prairies physiographic region and Gypsum Hills subregion, and its western side is technically within the Great Plains proper. Historically, the environment was one of rolling plains, grassy prairies, and in places, gypsum hills. The land is drained by three waterway systems. The Cimarron River, which forms part of the county's boundary with Woods County, collects the groundwater of the northwestern section. The North Canadian bisects the county from northwest to southeast. A northward-flowing tributary of the North Canadian, Wolf Creek, is dammed south of Fort Supply to form Fort Supply Lake. Creeks in the southern part of the county drain into the main (South) Canadian. The eastern and northwestern portions of the county have gypsum hills. Extending from Harper through Woods and Woodward counties is the five-thousand-acre Big Salt Plain. An extremely large gypsum cave, located eighteen miles north of Mooreland, forms a significant geologic feature and is protected as part of Alabaster Caverns State Park. Boiling Springs State Park, west of Woodward, comprises 820 acres surrounding natural springs.

Native peoples used the area for subsistence for thousands of years. Archaeologists have found evidence of the presence of Folsom-era big game hunters in adjacent Harper County at the Waugh Site near Laverne and at the Cooper Bonebed Site. In the 1986–92 period investigations at the Burnham Site, just across the Cimarron River in Woods County, suggest human presence in the region and use of its resources fourteen thousand years ago or even earlier. Archaeological surveys for highway construction near Mooreland in the 1950s exposed the Hedding Site and the Richards Site, both with evidence of habitation and house construction that may date from time of the Late Prehistoric Plains Village farmers in western Oklahoma, A.D. 800 to 1400. At least sixty-three sites had been identified by the mid-1980s. There is some speculation that the expedition led out of New Mexico by Don Juan de Oñate in 1599 passed through the area. In more modern times, various Plains tribes such as the Plains Apache, Comanche, Kiowa, Cheyenne, and Arapaho traversed the area, seeking buffalo, deer, and other game and gathering plants and also trading with Comancheros and other whites. In 1838 a significant battle took place on Wolf Creek (in Ellis or Woodward county) between Plains Indians, with Kiowa and Comanche against Cheyenne and Arapaho.

From the mid-nineteenth century future Woodward County was part of a well-used military transportation corridor that was important to frontier defense. Several U.S. Army expeditions evaluated the area in 1857 and 1860. In November 1868 Camp (later Fort) Supply, was established as a depot in Lt. Col. Alfred Sully's impending Seventh Cavalry campaign against the Cheyenne. From Camp Supply, Col. George A. Custer took the field and engaged in the attack on Black Kettle's camp on the Washita River in late November. Fort Supply became permanent because of its location at the confluence of Union Creek and the Beaver (Cimarron) River. An important military pathway thereafter led from Fort Dodge, Kansas, south to Fort Supply and southwest through Ellis County to Fort Elliott in Texas, and another road ran southeast from the fort along the North Canadian and southward to Fort Cobb, near Anadarko. From 1876 through the 1880s massive herds of cattle passed through the southwestern corner of the county along the Great Western Trail from Texas to Kansas.

For non-Indians, ranching was the first viable economic activity in the western prairies of Indian Territory. By the 1840s the area that became Woods County lay in the western part of a "perpetual western outlet" that 1828 and 1835 treaties guaranteed to the Cherokees. Generally, they did not use the land but after the Civil War leased it to the Cherokee Strip Live Stock Association. These were cattlemen, most from Texas, who grazed herds of cattle there. Ranching operations within the present county's boundaries included J. W. Andres (or Andrews), Day Brothers, Dickey Brothers, Gregory, Eldred and Company, and New York Cattle Company.

Rail transportation came to the area in the 1880s and proved important in the county's economic development after the Outlet opening. In 1886–87 the Southern Kansas Railway constructed a line southwest from Kiowa, Kansas, through the region and into Texas. The town of Woodward emerged where the railway crossed the military road, and the company constructed a station house and other depot buildings for the crew. A store also served local ranchers and travelers. The line, which facilitated settlement of the Outlet after the run, by 1899 was owned by the Atchison, Topeka and Santa Fe system and passed through Quinlan, Mooreland, and Woodward. A second rail line came two decades later, traversing the western part of the county from south to north. The Wichita Falls and Northwestern Railway, controlled by the Missouri, Kansas and Texas Railway, constructed a line from Elk City through Sharon, Woodward, and the town of Fort Supply to Forgan, in Beaver County, in 1911–12. Via both rail systems, crops could move out of Woodward County to be marketed, and manufactured goods could supply farmers and town dwellers.

In September 1893, when the Cherokee Outlet opened for non-Indian settlement, Woodward County was created as County N, with Woodward the seat of government. The designation included present Harper and approximately half of Ellis and Woods counties. A year later, only 6 percent of the county had been settled; by 1902, because of the Free Homes Act of 1900, 83 percent was owned. In a November 6, 1894, election, the county took the town's name. A courthouse constructed of brick was completed in 1901, and a fourth county courthouse was constructed in 1936–37. By designation in the state constitution in 1907, Woodward County was divided and its present boundaries delineated, and Woodward remained the county seat. In 1907 the county's population stood at 14,959 and in 1910, at 16,592.

Because of the characteristics of the surrounding prairie-plains environment, in 1913 the U.S. Department of Agriculture established the Great Plains Field Station southwest of Woodward. Its initial purpose was to conduct research on sorghums and broomcorn, later adding grapes and other fruit, shelterbelt trees, wheat, and grasses for recovering abandoned farmland. As cattle raising assumed increasing importance, and with re-grassing the new goal, in 1978 the facility was renamed the Southern Plains Range Research Station and its mission changed to the study of rangeland beef production and grasses.

The agricultural depression that began after World War I and continued into the 1930s took a toll on Woodward County. Financial institutions failed in Mutual, Woodward, and Quinlan. The arrival of the Great Depression in late 1929 magnified the trouble. The automobile made people more mobile, and Woodward grew while smaller towns got smaller. The county's population remained stable, however, after a drop to 14,663 in 1920. In 1930 it stood at 15,844 and grew to 16,270 in 1940. The federal government aided the depressed economy with the 1937 construction of Fort Supply Lake dam and with various Civilian Conservation Corps and Works Progress Administration projects.

The impact of the Great Depression was somewhat lessened by activity in the extractive industries. Mineral production in Woodward County has included salt, bentonite (fuller's earth), and petroleum. Salt has been produced from the Big Salt Plain, a deposit that spans five thousand acres in Woodward, Harper, and Woods counties. It was first described in 1811 by George C. Sibley (during which expedition he also described the Great Salt Plain of Alfalfa County). Ezra Blackmon operated a salt works on the Big Salt Plain from the 1920s into the 1970s. Bentonite was known locally from the mid-1890s and was mined and used to make a scouring product for cookware. In the early 1930s two plants opened. In 1932 eight miles northwest of Woodward the Texas Pacific Coal and Oil Company mined it and processed it at the Thurber Earthen Products Company plant. A second plant operated two miles east of Tangier into the 1940s. Bentonite is used primarily in petroleum filtration.

Petroleum exploration and drilling first took place, unsuccessfully, in Woodward County in 1903 and 1905 and recurred in the World War I years, again with little result other than temporary booms for small towns. In November 1956, however, a producing gas well was brought into production west of Woodward. Oil production gave the economy a much-needed transfusion and boosted Woodward's population but not that of the county, which nevertheless declined overall to 14,383 in 1950 and 13,902 in 1960. Other industry included a plant that extracted iodine from oil-field brine, constructed north of Woodward in 1975, which soon provided nearly 14 percent of the nation's supply of that gas.

One of the county's most memorable historical events occurred on April 9, 1947. That evening, a massive tornado cut a two-mile-wide path from the Texas Panhandle through Ellis, Woodward, and Woods counties. In the town of Woodward, two hundred city blocks were demolished, with huge loss of life. The National Weather Service has ranked this storm as the deadliest and one of the strongest (F5 on the Fujita scale) tornadoes ever to occur in the state.

Woodward County remained sparsely populated during the last decades of the twentieth century. The population stood at 15,537 in 1970, grew with the oil boom to 21,172 in 1980, and shrank with its demise to 18,976 in 1990 and to 18,486 in 2000. Incorporated towns of Woodward County in 2010 included Woodward, Sharon, Mutual, Mooreland, and Fort Supply. Other rural communities included Belva, Curtis, Tangier, West Woodward, Gerlach, Keenan, Richmond, and Cedardale. Many others had arisen as the population grew in the 1890s and early 1900s but have since vanished. Often, these dispersed rural settlements indicated the location of a post office or a rural schoolhouse that served a surrounding district. At one time, 264 school districts existed in the county before it was divided. In 2010 the U.S. Census defined the 20,081 inhabitants of Woodward County as 86.7 percent white, 2.8 percent American Indian, 1.6 percent African American, and 0.6 percent Asian. Hispanic ethnicity was identified as 10.6 percent. Cooper and Fort Supply Wildlife Management Areas are operated by the Oklahoma Department of Wildlife Conservation. Dick T. Morgan, attorney and register of the U.S. Land Office at Woodward from 1904 to 1908, and Phillip Ferguson, rancher and bank president, resided in Woodward County. Both represented the area in the U.S. House of Representatives. Regional and county history is illustrated at the Plains Indians and Pioneers Museum, located in Woodward.

The following (as per The Chicago Manual of Style, 17th edition) is the preferred citation for articles:
Dianna Everett, “Woodward County,” The Encyclopedia of Oklahoma History and Culture, https://www.okhistory.org/publications/enc/entry.php?entry=WO017.