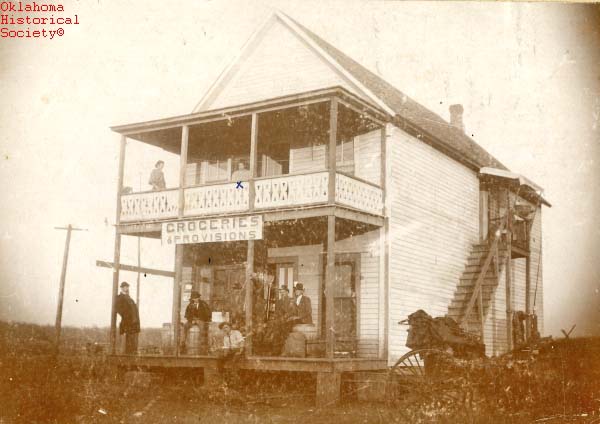 Located in Ottawa County, Wyandotte lies approximately one mile south of U.S. Highway 60 on the Burlington Northern–Santa Fe Railroad, twelve miles southeast of Miami, the county seat. The town name honors the Wyandotte tribe, removed to the area in 1867. In 1869 the Society of Friends (Quakers) established a mission in the vicinity. The Wyandotte Tribal Council donated land for the Quakers, with the approval of the commissioner of Indian Affairs, to operate a boarding school for Seneca, Wyandotte, and Shawnee children. In 1871 campus construction began, with classes beginning in 1872. The federal government continued to assert increasing control over the school, completely managing it by the twentieth century, although the Friends continued to support it with gifts. It has had several names, including Wyandotte Mission, Seneca Indian School, Seneca, Shawnee, and Wyandotte Industrial Boarding School, and Seneca Boarding School. It closed in 1980. After the October 1900 death of Quapaw Agency head Edward Goldberg, the agency reorganized with the superintendent of the Seneca school also performing the Indian agent's duties. The Quapaw Agency headquarters moved to the campus but in 1920 was separated into dual agencies with one in Miami. Eventually the agency consolidated in Miami.

In 1871 the Atlantic and Pacific Railroad (acquired by the St. Louis and San Francisco Railway in 1876) laid tracks in the area. In 1876 the Prairie City post office (established in 1872) moved three miles east to present Wyandotte and changed its name to Grand River. After the Wyandotte tribe finished the allotment process, Grand River changed its designation to Wyandotte in 1894. The Wyandotte Association, with tribe members Silas Armstrong (president) and A. J. Mudeater (vice president) as leaders, leased land from allottees for the townsite. Before this, the Quapaw Indian Agent had claimed that Wyandotte consisted of a post office and a few houses. The town was platted in 1895, with the survey approved by the U.S. Northern District Court of Indian Territory in 1896. By 1900 the population stood at 224, and a 1901 Indian Territory gazetteer noted that the incorporated town had six general stores, two hotels, two liveries, a blacksmith, a flour mill, a millinery, a meat market, and a drug store. That year a rock crusher operated a mile west of the town. In 1910 the population was 255, and the community had added a bank, a roller mill, a sawmill, and a newspaper, the Ottawa County Courier. The mission school printed the vicinity's first newspaper, The Hallequah, in 1879, and in 1900 W. Innis Torberts published the short-lived Indian Methodist.

In 1920 the federal census registered 274 residents and in 1930, 271. From 1922 to 1927 Mamie Foster served as mayor, and the city marshal, as well as most other city officials, were women. In 1940 the Grand River Dam Authority completed the Pensacola Dam, creating Lake O' the Cherokees, known as Grand Lake. Its northernmost appendage took a portion of Wyandotte's agricultural, business, and residential land. The lake has added tourist dollars and lakeside housing development. In 1940 the population had climbed to 348, but it fell sharply to 242 in 1950. In 1955 the town's bank still persevered, and retail outlets, service stations, and grocery stores dominated the business sector. In 1966, as it planned a rural water district, the town could not find any record of incorporation. Residents petitioned the Ottawa County Board of Commissioners to approve an election and voted for incorporation in April 1966. The population has slowly increased, reaching 336 in 1980 and 366 in 1990. In 1980 the Burlington Northern purchased the Frisco railroad, which continued to serve the community.

In 1909 the first public school opened, and in 1921 it became Ottawa County's Consolidated School District Number One. In 2000 Wyandotte's school district enrolled 765 in kindergarten through the twelfth grade. Former students of the Seneca Indian School hold an annual reunion at the town, and the Wyandotte tribe hosts other former Quapaw Agency nations in a yearly green corn feast in the vicinity. The 2000 population stood at 363, but in ten years the number dropped to 333.

The following (as per The Chicago Manual of Style, 17th edition) is the preferred citation for articles:
Larry O'Dell, “Wyandotte (town),” The Encyclopedia of Oklahoma History and Culture, https://www.okhistory.org/publications/enc/entry.php?entry=WY002.