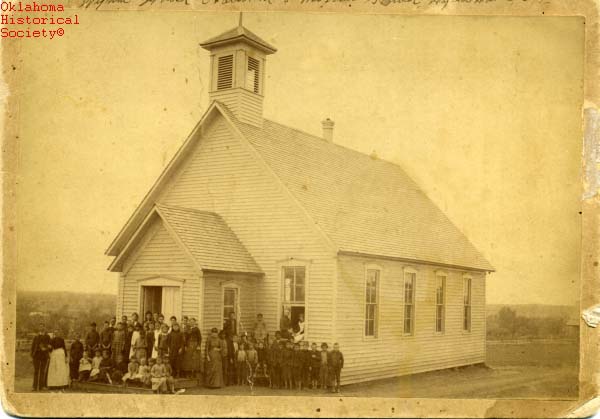 The incorporated community of Wynnewood is located in the southeastern section of Garvin County at the junction of U.S. Highway 77 and State Highway 29, sixty-six miles south of Oklahoma City. In 1886 John H. Walner, a resident of the Chickasaw Nation, moved his house and store approximately four miles south from Cherokee Town on the Washita River and established a settlement along the proposed route of the Gulf, Colorado and Santa Re Railway. When the line reached Walner the next year, railroad personnel renamed the village Wynnewood after a Pennsylvania town. The designation became official on April 6, 1887.

A promotional brochure produced around 1907 dubbed Wynnewood "the Queen City of the Famous Washita Valley." The town had an opera house, electric lights, telephones, and the thirty-room Eskridge Hotel, a favorite railroad stop between Oklahoma City and Dallas, Texas. The Eskridge Hotel (NR 79001994) and the Hargis-Mitchell-Cochran House (NR 82003684) are Wynnewood properties listed in the National Register of Historic Places.

Local education began in 1887 when Mary Semple Hotchkins, a Presbyterian missionary, moved her school for Chickasaw children from near Cherokee Town to Wynnewood. Area citizens paid for the construction of Indianola College, a Presbyterian institution, in 1901. After it closed in 1909, the college was used by the town as a junior and senior high school until 1927.

Although the railroad provided a stable foundation for Wynnewood, residents developed an agriculture-based economy. Native pecans, peaches, corn, wheat, oats, alfalfa, cotton, and clover were principal crops during the early 1900s. A cottonseed oil company and four cotton gins supported the cotton industry as investors added lumberyards, barbershops, dry goods stores, banks, and other businesses. Early newspapers included the Wynnewood Republic and the Wynnewood Times. The Wynnewood Gazette appeared in 1906 and remained in publication in the twenty-first century.

In 1922–23 the Texas Pacific Coal and Oil Company built an oil refinery, and it became the lifeblood of Wynnewood's economy. Kerr-McGee Corporation purchased the facility in 1950, and by 1957 employment at the refinery equaled all other area jobs combined. Owned by the Gary-Williams Energy Corporation since 1995, the Wynnewood Refining Company continues to produce gasoline, diesel, jet fuel, and other petroleum products for the Mid-Continent area, while providing local economic stability and funds for civic programs.

Edna Carr Edmondson, The History of Wynnewood: A People and Their Place in the Building of a City (Norman, Okla.: Ok-Curtain Press, 1994).

The following (as per The Chicago Manual of Style, 17th edition) is the preferred citation for articles:
D. Keith Lough, “Wynnewood,” The Encyclopedia of Oklahoma History and Culture, https://www.okhistory.org/publications/enc/entry.php?entry=WY003.