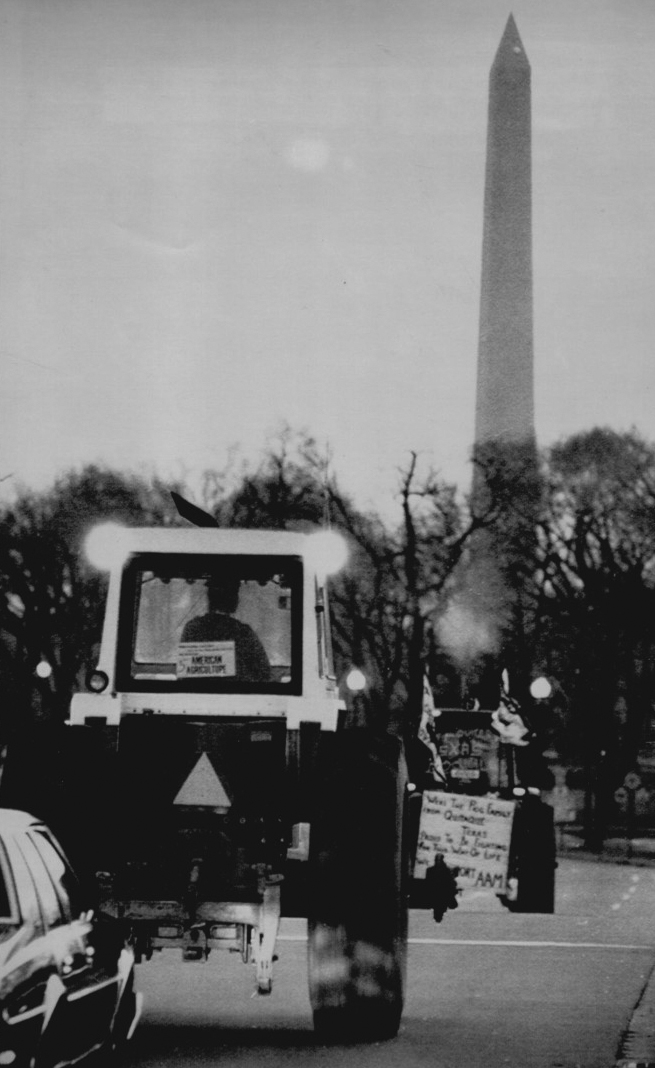 The American Agricultural Movement (AAM), which reached its height in 1978, grew out of low farm prices in 1976 and 1977 following unusually good times earlier in the decade. It started among wheat and cattle farmers.

In the summer of 1977 some farmers in western Oklahoma joined representatives from southeastern Colorado, New Mexico, Texas, and Kansas to discuss their mutual problems. They talked about staging a farm strike and refusing to plant any crops if Congress did not pass legislation to raise farm prices. Farmers sharply criticized the recently passed Food and Agriculture Act of 1977 for doing nothing to help farmers as they struggled with low prices and heavy debts. An office was set up in Springfield, a small town in southeastern Colorado, to publicize the organization and its demands. By late summer the movement had spread to about twenty states. Members demanded prices equal to 100 percent of parity, prices that, in relation to nonfarm prices, were considered favorable to farmers.

Farmers in this movement concluded that only by direct and dramatic action could they achieve their goal. On September 22, 1977, some two thousand angry farmers drove their tractors and trucks around the auditorium in Pueblo, Colorado, where U.S. Secretary of Agriculture Robert Bergland was speaking. The protesters demanded federal legislation to raise farm prices. Many of the trucks carried Oklahoma license plates.

This was only a prelude to huge tractorcades around the nation. Hundreds of farmers drove their tractors to Amarillo, Texas, and in and around Plains, Georgia, Pres. Jimmy Carter's hometown. In Atlanta, Georgia, they drove their tractors up the steps of the state capitol, and in Washington, D.C., on January 18, 1978, tractors and trucks damaged the grounds of the National Mall.

Oklahoma farmers participated in the tractorcades, and they found fellow Oklahomans supporting their cause. On January 18, 1978, the Oklahoma Legislature passed a resolution favoring "a guaranteed price for agricultural products . . . at 100% of parity." Moreover, Oklahomans testified before the Senate Agriculture Committee in Washington during February and March 1978 on behalf of the AAM program. Jim R. Billington, president of the Oklahoma Wheat Growers Association, pushed hard for new legislation, and he had the strong support of Sen. Henry Bellmon, a member of the committee and himself an Oklahoma wheat farmer.

The entire movement centered on Oklahoma on April 24 and 25, 1978, when the AAM held a national convention in Oklahoma City. Nearly two thousand representatives from thirty-nine states gathered at the Fairgrounds Arena, and after hanging President Carter in effigy, they demanded that Congress pass legislation that would lift farm prices to 100 percent of parity. Gov. David Boren urged the delegates to keep working toward their goals, because, he said, the American people were with them.

Mainly as a result of AAM pressures, Congress did pass some measures helpful to farmers, but these measures and actions by the U.S. Department of Agriculture fell far short of what the organization demanded. On February 9, 1979, Sen. George McGovern of South Dakota held hearings on the AAM. Harvey C. Gardener of Oklahoma and five others testified. But the organization faded away, leaving little permanent imprint on American agricultural policy.

The following (as per The Chicago Manual of Style, 17th edition) is the preferred citation for articles:
Gilbert C. Fite, “American Agricultural Movement,” The Encyclopedia of Oklahoma History and Culture, https://www.okhistory.org/publications/enc/entry.php?entry=AM003.