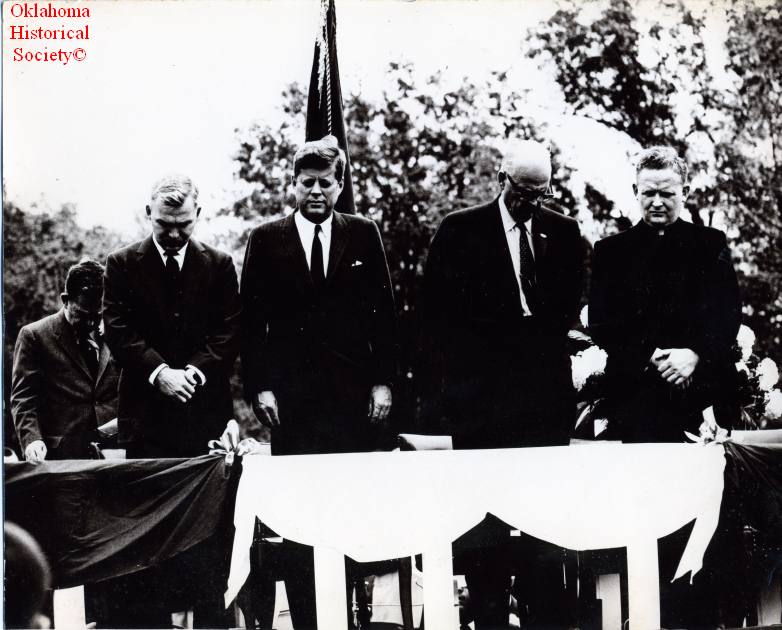 The Democratic Party of Oklahoma has been the prevailing force in politics for most of the state's history. Since 1907 Democrats have dominated the scene at a level not evident anywhere except in the Old South. Democrats have won eighteen of twenty-three gubernatorial elections since statehood. Between 1907 and 1973 Democrats averaged 81 percent of seats held in the state legislature. In 1964, even as Republicans won their first modern gubernatorial election, only 18 percent of Oklahoma voters registered as Republicans. Democrats saw their political capital diminished in the 1990s as the resurgent GOP increased its registration base and captured most of the major elective offices in the state.

For decades the bedrock of Democratic Party strength has been the southeastern part of the state, "Little Dixie." This region imported not just people, but also local culture, place-names, architecture, and political tradition directly from a variety of southern states, especially Mississippi. Voter registration in the region runs as high as 90 percent Democratic in many communities, and even today most local politics is decided in the party's primary. Little Dixie is also the home of many of the prominent people in the history of the Democratic Party. Robert S. Kerr, Lyle and David L. Boren, Carl Albert, and a variety of other local families provided generations of leadership in both the state and national Democratic Party. The last two party chairmen, Robert S. Kerr III and Mike Mass, both hailed from the heart of Little Dixie.

Oklahoman Will Rogers was fond of saying "I don't belong to an organized political party; I am a Democrat." No words ring more true. Consider the state party's traditional factionalism. Oklahoma's Democratic Party is characterized by a three-way internal division. At one pole is the membership of the legislature. A second group is the body of locally elected Democrats, especially the county commissioners and sheriffs, who are concerned with local political autonomy and control of local politics. The third faction, while geographically concentrated but nonetheless significant, comprises the more liberal, organized labor groups in Tulsa and Oklahoma City. These three often vie for power within the party; however, because each has a basis of political power, no one is permanently preeminent. In local contests, party factionalism is often intensified as the state party seeks to stay uninvolved until after the primary and runoff.

Until very recently the state party could not be characterized as having any meaningful organization. As in many one-party-dominant states, the state party organization was weak, as factions vied for power in the primaries. The state party has therefore been a large tent that encompassed the ambitions of candidates of various ideological bents, from populists to urban liberals to traditional "boll-weevil" conservatives. The state party was and is a collection of campaigns and candidacies, independent operations guided by the common goal of winning under the rooster.

Since 1980 no Democrat has attained more than 41 percent of the vote for president, and the only Democrats to win Oklahoma since World War II are Harry Truman and Lyndon Johnson. The two parties have split the last ten gubernatorial elections (five and five), and Democrats won only two elections after 1980. The net number of registered Democrats has declined by more than four hundred thousand since the early 1980s. As of 2000 about 55 percent of Oklahoma voters registered as Democrats.

In 1994 the state party suffered its greatest political setback. Since the 1960s the GOP had made creeping gains in offices and voter registration. By 1990 Republicans counted about one-third of voters by registration and similar levels of support in the state legislature. Democrats still dominated state offices, though Republicans had won a U.S. Senate seat in 1980 and the governorship in 1986. In the 1994 elections Republicans captured five of six congressional seats, half of the statewide elected offices including governor and lieutenant governor, an open U.S. Senate seat, and a number of state legislative seats. Exit polls of the gubernatorial election indicated that far fewer voters identified with the Democrats than the 60 percent Democratic registration figures indicated. Only about 45 percent of voters called themselves Democrats, and even among those self-described Democrats, only 53 percent voted for the Democratic nominee for governor, Jack Mildren.

GOP gains were in part a product of the Christian Right mobilization on behalf of the party. The other reason for Republican gains was the destabilization of the Democrats over a factional split that led former Democratic congressman Wes Watkins to abandon the party and run as an independent. Watkins won devastating support in the bedrock Democratic counties of Little Dixie and then subsequently defected to the Republican Party. This division laid bare the consequences of extreme factional division for the Democrats.

Subsequent to the tremendous gains of the Republican Party, the state Democratic Party reacted by taking steps to create a meaningful party organization. For the first time, in 1995 Democrats hired a professional executive director, education lobbyist Pat Hall, to direct party operations and development. Despite these efforts Republicans continued to make gains in the 1996 and 1998 elections, as the party still sought leadership in the face of a highly centralized and competitive Republican Party. Little assistance was forthcoming from the national Democratic Party, which by 1996 viewed Oklahoma as unwinnable at the presidential level.

The following (as per The Chicago Manual of Style, 17th edition) is the preferred citation for articles:
Ronald Keith Gaddie, “Democratic Party,” The Encyclopedia of Oklahoma History and Culture, https://www.okhistory.org/publications/enc/entry.php?entry=DE013.