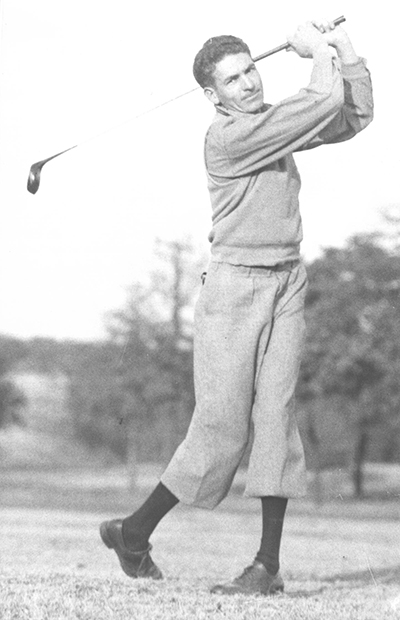 Records suggest that golf was first played in territorial Oklahoma in May 1900 at Guthrie Country Club. Also that year a nine-hole golf course reportedly opened for play in the Maywood addition of Oklahoma City, in the vicinity of Northeast Twelfth and Stiles, near the Jordan farm. Scottish immigrant Alexander H. Findlay, an early golf course architect and one of the first persons to play golf in the United States, designed the course at Guthrie Country Club. Other Scottish golf professionals followed Findlay into Oklahoma, including Leslie Brownlee, who designed the Oklahoma City Lakeview Golf Course in 1907, and Brownlee's nephew, Arthur Jackson, whose construction work and model caddie program at Oklahoma City's Lincoln Park (opened in 1922) would earn him designation as "the father of public golf in Oklahoma." Oklahoma also attracted the most prominent American course architect of the World War I era, Pennsylvanian A.W. Tillinghast, who designed and supervised construction of Tulsa Country Club and The Oaks.

The preeminent American course architect of the Depression era was Oklahoman Perry Duke Maxwell, an Ardmore banker who designed his first golf course, Ardmore's Dornick Hills Country Club, in 1913, with the help of his wife, Ray Wood Maxwell, and their children. In 1919 Maxwell traveled to Scotland to study the architecture of the linksland courses and then began to design full time. During the 1920s he produced a splendid array of Oklahoma courses—Shawnee Country Club, Indian Hills Golf Course, Muskogee Country Club, Hillcrest Country Club, Twin Hills Golf and Country Club, Ponca City Country Club, Duncan Elks Golf and Country Club, and Oklahoma City Golf and Country Club. Maxwell's most important contribution to American golf was his 1935 design of Tulsa's Southern Hills Country Club. His work at Southern Hills and elsewhere generated such acclaim that he was hired by Robert T. "Bobby" Jones and Alister Mackenzie to assist Mackenzie's design work at Augusta National Golf Club, home of the Masters Tournament. Upon Mackenzie's death in 1934, Maxwell oversaw all redesign and construction work at Augusta National until his death in 1952. (An additional significant relationship between Oklahoma and Augusta National Golf Course came about when Jones and Augusta cofounder Clifford Roberts hired Oklahoma City sports journalist Bill Inglish as official Masters Tournament historian, a position Inglish held from 1964 until his death in 1998).

Beginning with the 1910 Oklahoma Open, Oklahoma has hosted more than three hundred professional tour and intercollegiate events in addition to major professional and amateur championships. The Oklahoma City Open was first held in the 1920s and resurrected during the 1960s. During the 1950s Ardmoreites Waco and Opie Turner brought men's and women's professional golf to southern Oklahoma, with tournaments held at Ardmore and Burneyville. Comanche County businessman Jack Greer brought the Ladies Professional Golf Association (LPGA) Tour to Lawton in the 1950s. The Oklahoma Open, regarded as one of the top state opens in the nation, has been held continuously since 1910 (except for war years). The LPGA Tour, coaxed to Oklahoma City by U. C. Ferguson in 1955, also competed at Muskogee during the 1960s, and the U.S. Women's Open was held there in 1970. Oklahoma City's Twin Hills hosted the 1935 Professional Golf Association (PGA) Championship and later the 1967 U.S. Junior Open. Tulsa's Southern Hills Country Club has hosted three PGA Championships and eight United States Golf Association (USGA) national championships including three U.S. Opens. Eight other Oklahoma courses have hosted USGA national championships, including the 1983 U.S. Women's Open at Broken Arrow's Cedar Ridge. Edmond's Oak Tree Country Club hosted the 1988 PGA Championship, and several Senior PGA Tour events and Hogan/Nike Tour events have come to the state as well. The LPGA returned to Tulsa Country Club for the Williams Championship in 2001.

During the latter half of the twentieth century Oklahomans witnessed the development of new golf courses, with some outstanding work by Oklahoman architects. Floyd Farley, Don Sechrest, Duffy Martin, Randy Heckenkemper, Mark Hayes, Bland Pittman, Tripp Davis, Jerry Slack, and Lyndy Lindsey have all designed courses in the state.

William Gilbert Van Tassel Sutphen, Harper's Official Golf Guide 1901: A Directory of All Golf Clubs and Associations in the United States, Together With Statistical Tables, the Rules of Golf and Other General Information (New York: Harper's, 1901).

The following (as per The Chicago Manual of Style, 17th edition) is the preferred citation for articles:
Del Lemon, “Golf,” The Encyclopedia of Oklahoma History and Culture, https://www.okhistory.org/publications/enc/entry.php?entry=GO007.