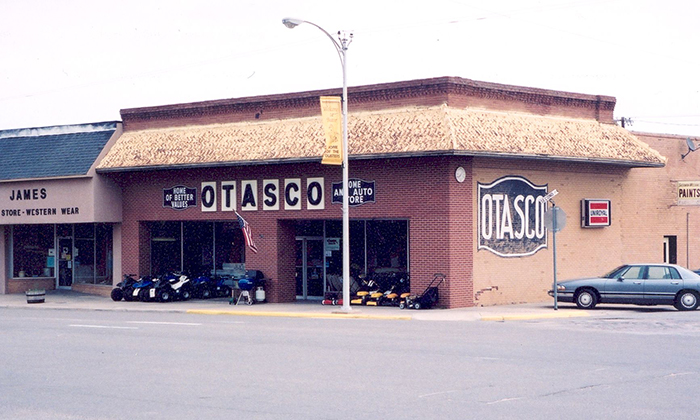 In 1918 three Jewish Lithuanian immigrant brothers, Sam (1898–1939), Maurice (1891–1970), and Herman (1889–1971) Sanditen, opened the first Oklahoma Tire and Supply Company (OTASCO) in Okmulgee. The store had a gas pump and sold used tires and auto accessories. The brothers staked their future on the young automobile industry. The 1918 Polk's Oklahoma State Gazetteer and Business Directory listed the operation as the Oklahoma Salvage and Supply Company. By 1922 they expanded to Henryetta. In 1925 the headquarters of the growing company moved to Tulsa.

The chain continued to multiply, founding its first Oklahoma City outlet in 1929. By 1936 thirty-four stores sold $250,000 in merchandise. The firm diversified their inventory to items such as radios, appliances, and vacuum cleaners. Of the thirty-four outlets, nineteen were associated stores owned by the store manager, who contracted with OTASCO for all of the stock, the name, and the advertising. Two other brothers, Julius and Ely, and a brother-in-law, Gershon Fenster, joined the business. Growth continued, and in 1943, after twenty-five years, there were eighty-three stores in Oklahoma, Arkansas, Kansas, and Missouri. Forty of these were associated establishments. Surprisingly, the expansion and rising profits occurred during the hard times of the Great Depression and Dust Bowl.

The last half of the twentieth century brought many changes to OTASCO. In 1960 the McCrory Corporation bought the company, retaining the Sanditens and other management to run the 167 associated and 86 company-owned branches. McCrory's board chair, Meshulam Riklis, an immigrant from Turkey, consolidated some of the company's stores, including McClellan's, Lerner's, and OTASCO, into the same facility, creating "strip malls," to which shoppers could make one trip. One of the first of these occurred in Stillwater. At OTASCO's fiftieth anniversary in 1968 the chain held 455 units in twelve states. In 1984 the firm's employees purchased 100 percent of the stock from McCrory, creating what was then one of the largest employee-owned companies in America. By 1987 OTASCO began to close stores, and in 1988 it had to file a bankruptcy reorganization petition. In 1989 OTASCO shut down the remaining sixty-two franchises and functionally ceased operation.

The following (as per The Chicago Manual of Style, 17th edition) is the preferred citation for articles:
Larry O'Dell, “OTASCO,” The Encyclopedia of Oklahoma History and Culture, https://www.okhistory.org/publications/enc/entry.php?entry=OT004.