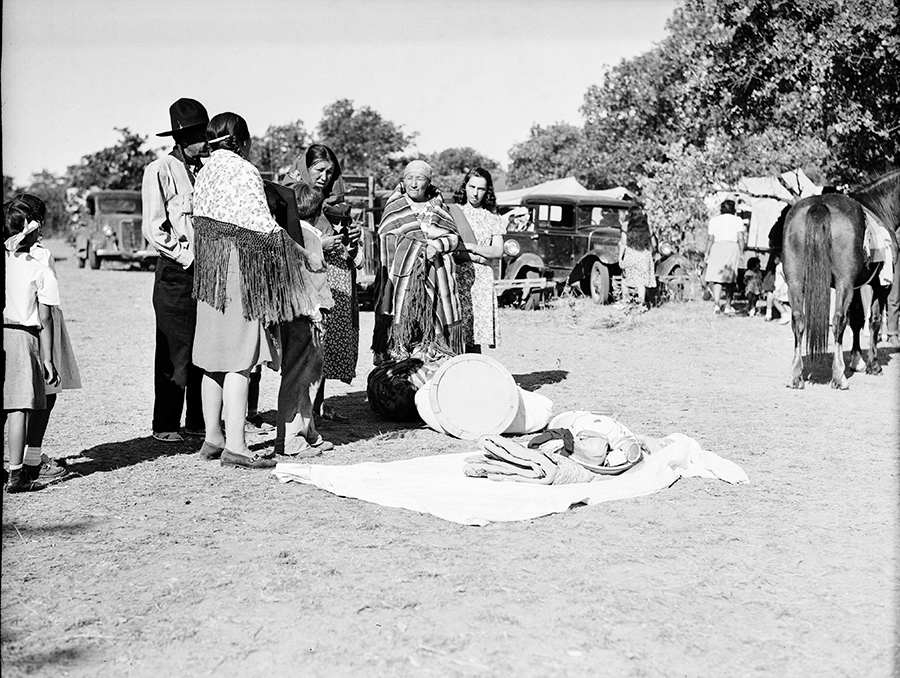 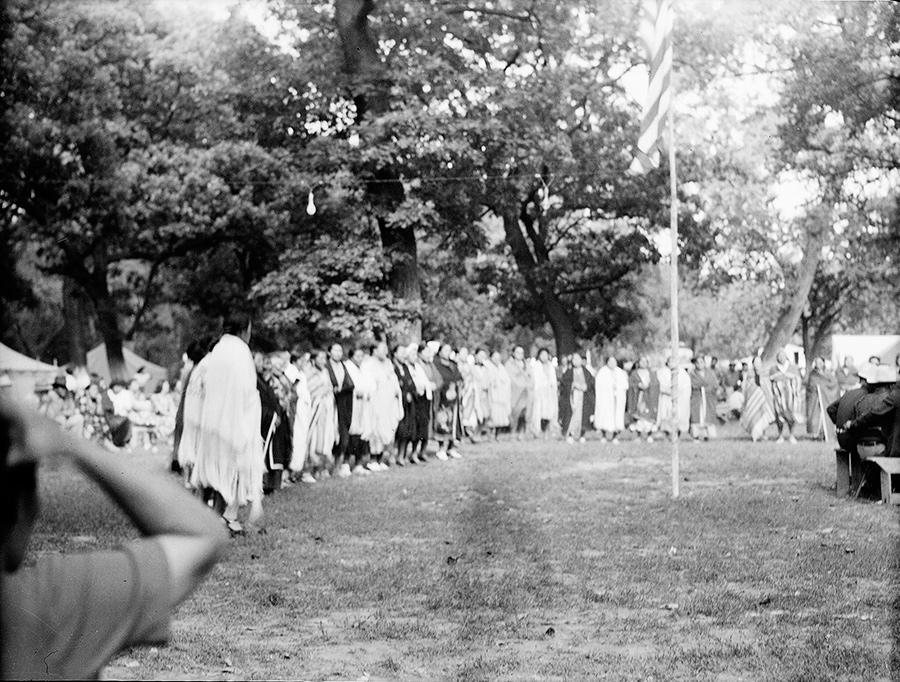 As events that celebrate being Indian, powwows inspire cultural and personal pride in American Indians. They allow Indian tribes, families, and individuals to come together for the purpose of feasting, hearing their languages spoken, exchanging arts and crafts, singing, dancing, and upholding tribal customs. Because the powwow is a recent Indian phenomenon, it should be emphasized that an Indian cannot be considered traditional simply because he or she attends powwows.

The term powwow, derives from the Algonquian Indian word pau wau, which means "he dreams." In this definition, pau wau had a personal, reverent, religious significance. Contrasting with this definition, the contemporary powwow is usually open to the public and is a group-oriented social event.

The concept of powwow originated among the tribes that inhabited the Great Plains from the southern prairies of Canada to the lower plains of Texas. In the prereservation era many Plains Indian tribes formed intertribal alliances. These alliances allowed tribe-specific songs, dances, and ceremonies to be exchanged. This is the historical foundation for today's "intertribal powwow."

The first legitimate intertribal powwow in Oklahoma was the Ponca Powwow. It began in northern Indian Territory around 1879. Indian Territory was truly intertribal, as approximately sixty-seven tribes have been historically associated with lands that became Oklahoma. Many tribes' members traveled by horse as far as one hundred miles to participate in singing and dancing at the Ponca event. These included the Omaha, Ponca, Kaw, Osage, Pawnee, and Otoe-Missouria. The helushka, or men's warrior dances, dominated the early Ponca Powwows.

Into the early 1900s the Plains Indians' lifestyles were rapidly deteriorating, as the peoples' spirits had been broken. During World War I American Indians enlisted in the armed forces, and members of Indian tribes that were once mortal enemies fought side by side to defend the United States. At their homecoming most veterans laid their tribal differences aside to dance with their comrades to a common drumbeat. The American flag, once a symbol of the destruction of Indian lives, acquired a new status at twentieth-century Indian gatherings. In a renaissance of ancient warrior societies, commemorations began to reemerge to honor veterans as modern-day warriors. Tribal elders who remembered specific tribal protocol contributed their knowledge of conducting ceremonies for Indian servicemen.

As a result, new procedures, combined with ancient traditions, developed to fit the times. By 1920 the Plains Indian tribes of southwestern Oklahoma held their first intertribal powwow at Dietrich Lake. As intertribal powwows became more numerous, new songs and organizations were instituted to commemorate contemporary events. By the 1950s the intertribal powwow reached the cities as tribe members relocated to find employment. This provided an even greater opportunity for cultural exchange among a wider variety of Indian peoples. Their need to identify with other Indians encouraged them to seek mutual "lndianness" in intertribal powwows. From Alaska to Florida to southern California to Maine and everywhere in between, wherever there is a pocket of Indians, there are powwows. The powwow circuit is analogous to the professional rodeo, golf, and tennis circuits. Following the powwow circuits is a year-round way of life for many Indians.

The central, most significant focal point of any powwow is the drum and singers. They provide the musical accompaniment and set the tempo for the dances. Powwow dancing is the most visible part of the powwow. The men's fancy dance and women's fancy shawl dance are both recent innovations that began less than a century ago. In addition to these two dances, other dance categories are called the northern men's traditional dance, southern men's straight dance, men's grass dance, women's northern/southern traditional dance, and women's jingle dress dance.

The powwow has become popular all across North America and has spread into Europe. The event has faced many changes since its inception. Individual tribal identity has become less identifiable in songs, dances, and the regalia that are worn today. As Indian people continue to live with the values of both the modern world and their Indian background, these influences will continue to affect the evolution of the powwow.

Karl Eshbach and Kalman Applbaum, "Who Goes to Powwows? Evidence from the Survey of American Indians and Alaska Natives," American Indian Culture and Research Journal 24 (2000).

Benjamin R. Kracht, "'It Would Break Our Hearts Not to Have Our Kiowas': War Dancing, Tourism, and the Rise of Powwows in the Early Twentieth Century," The Chronicles of Oklahoma 90 (Fall 2012).

Andrew Wade Williams, "We Are All Warriors Now: Dancing in the Future in the Contemporary Oklahoma Powwow" (B.A. thesis, Harvard University, 1997).

The following (as per The Chicago Manual of Style, 17th edition) is the preferred citation for articles:
Dennis W. Zotigh, “Powwows,” The Encyclopedia of Oklahoma History and Culture, https://www.okhistory.org/publications/enc/entry.php?entry=PO030.