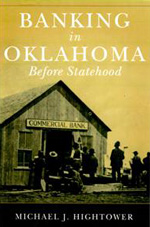 Banking in Oklahoma Before Statehood

This lively book takes Oklahoma history into the world of Wild West capitalism. Author Michael Hightower begins with a survey of banking from the early days of the American republic until commercial patterns coalesced in the East. Relying largely on primary sources gleaned from the OHS Manuscript Archives, Hightower then follows the course of American expansion westward to chronicle the evolution of banking and commerce in the Indian Territory and, from 1890 to 1907, the Oklahoma and Indian Territories. Topics include the riverboat trade, overland freighting, bartering in an economy of frontier scarcity, the Indian trade, merchant banking, crime and punishment, and the red-hot competition to establish the first bank in town. Pioneer bankers' challenges were compounded by journalists—some legitimate, and others who raised sensationalism to an art form—who regaled their readers with tales of frontier mayhem that branded the Twin Territories as risky venues for business. The story of banking in Oklahoma before statehood is nothing less than a microcosm of what might be the fundamental conflict in American history between democratic ideals and the inequalities inherent in capitalism. 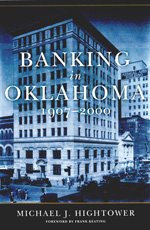 This book begins where Banking in Oklahoma Before Statehood ends, with the statehood celebration that coincided with the Panic of 1907. Subsequent adventures in Oklahoma banking include oil and real estate booms that turned to busts, brazen hold-ups, the Great Depression, bankers' success in luring military spending to Oklahoma during World War II, and the glory days of postwar prosperity. Penn Square Bank's collapse in 1982 was both cause and effect of the most severe economic downturn in the oil patch since the 1930s, and it warrants two chapters, one on the rise, and one on the fall. For once, the lessons of history are crystal clear, and we ignore them at our peril. Hightower closes his book on an upbeat note, with banks returning to profitability even as they confronted challenges stemming from runaway technology and globalization. The most consistent theme, and one that pervades dozens of taped interviews that Hightower has been conducting with bankers and business people throughout Oklahoma and uses as primary sources in this book, is the resilience of community banking against an onslaught of regulation and consolidation of financial services.

Michael J. Hightower, PhD, is a native of Oklahoma City. He has taught as a visiting lecturer at the University of Virginia and Washington and Lee University and is former president of Council Oak Books in Tulsa. As a descendant of businessmen who settled in the Oklahoma Territory in the 1890s, he writes about America's frontier experience, banking, and commerce. He served as principal researcher for the Oklahoma Historical Society's Oklahoma Bank and Commerce History Project.

To suggest avenues for further research on banking and commerce in Oklahoma and/or to schedule a book discussion in your area, email Dr. Hightower at mhightower@okhistory.org. For information on his publications and public speaking schedule, visit his website at www.michaeljhightower.com.