The Doaksville archaeological site provides a glimpse of the diverse historic and cultural past of southeast Oklahoma. Here, a trading post was established during the early 1820s by Josiah Doak. With the signing of the treaties of Dancing Rabbit Creek and Doak’s Stand, Doaksville became a major destination in what later became known as Indian Territory. With the military post nearby at Fort Towson for protection, Doaksville became the largest town in Indian Territory in 1850 and the commercial center of the Choctaw Nation. 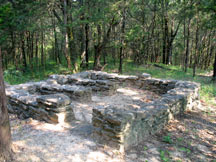 Ruins of the old jail

Commerce grew with the establishment of the roads built to supply Fort Towson. These roads connected this region to metropolitan areas such as Fort Smith, Arkansas, and Fort Jessup, Louisiana. Steamboats on the Red River in the late 1830s carried goods to Doaksville and agriculture products out of the region. At its height in the 1840s and 1850sm the town boasted more than thirty buildings, including stores, a jail, school, hotel, and two newspapers.

Doaksville’s decline began with the abandonment of Fort Towson in 1854. The Civil War in Indian Territory devastated the region’s plantation-based economy. On June 23, 1865, the last Confederate general, Stand Watie, surrendered his Indian Brigade to Union forces near Doaksville. The town declined in importance in the late 1800s. The final blow came in 1870 when the railroad was built one mile south. The town moved to the railroad, and Fort Towson took the place of Doaksville.

Doaksville is an interpreted archaeological site operated by the Oklahoma Historical Society. Major archaeological investigations in 1995, 1996, and 1997 revealed the limestone foundations of multiple structures, including wells, jail, store, hotel, along with thousands of artifacts. A walking trail constructed in 2001 loops around the stabilized masonry ruins, and signage interprets the history of Doaksville and the multi-cultural people who lived there.

Visit The Encyclopedia of Oklahoma History and Culture to find out more about Doaksville.