Museum of the Western Prairie

From geologic uplifts and ancient seas to irrigated farming and Altus Air Force Base, the Museum of the Western Prairie chronicles the history of southwest Oklahoma. Follow the story of the American Indians, frontier soldiers, cowboys, and homesteaders. Trace economic development from assurances that “rain will follow the plow,” to dust, drought, depression, and beyond.

The Museum of the Western Prairie tells the story of southwest Oklahoma from the distant past to the present. The story begins with the Wichita Mountains—the low, granite peaks that formed almost 300 million years ago. At first the Wichitas towered above the landscape; later, they were islands in an ancient sea. Today the modest hills that remain serve as a connection between every era of southwest Oklahoma history.

Our free audio tour takes listeners on a journey through museum exhibits sharing the story of southwest Oklahoma. Visit izi.Travel to begin the tour.

During the last Ice Age, the region’s climate supported animals that would later become extinct, such as the mammoth and mastodon. Their remains have been found throughout the area. Ancient forms of bison, the ancestors of what were later called “buffalo” in North America, have also been found. Archaeological evidence reveals that humans hunted these animals in southwest Oklahoma at least eleven thousand years ago.

By seven thousand years ago, Paleo-Indians were present in southwest Oklahoma. These people were hunters and gatherers who wandered on foot. Six thousand years later, permanent settlements were established in some areas, and farming began. One of the cultures connected with the period after European contact developed at this time: that of the Wichita.

Between the late 1550s and early 1700s, horses brought to North America by Europeans spread across the Great Plains. As a result, many Native groups transformed dramatically, becoming part of what are known broadly as the Plains Indians. Their highly mobile lifestyle, based upon hunting the herds of bison that migrated north and south across interior North America, is a cultural image that remains today. 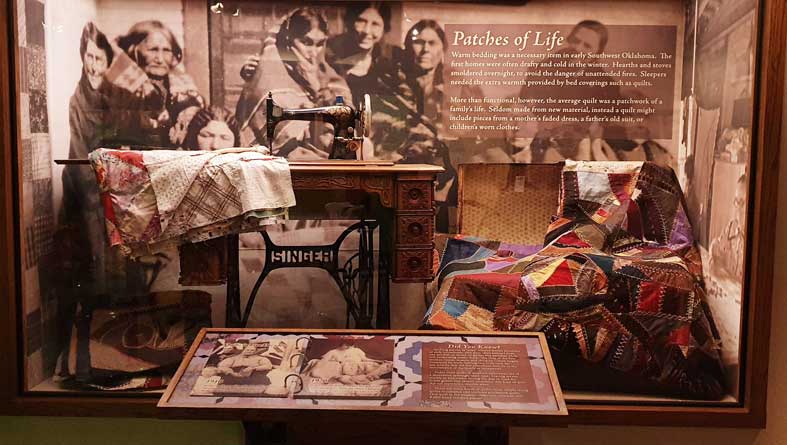 Patches of Life exhibit at the Museum of the Western Prairie

The Civil War and Beyond

The American Civil War (1861–65) heralded a period of tremendous change in the United States. Although southwest Oklahoma played no significant role in the conflict, it was directly affected by the events that followed. In particular, Texas ranchers began herding longhorns overland to meet a southern branch of the Transcontinental Railroad. This route, the Western Trail, passed through the region. At its peak in 1881, approximately three hundred thousand cattle, seven thousand horses, and one thousand men moved up the trail. Altogether, more than 7 million cattle traveled the route during its operation.

The years following the war also marked a period of severe change for the Plains Indians. Expanding settlement on the Southern Plains led to removal and confinement in the Indian Territory. Texas, which had no reservations, claimed present-day southwest Oklahoma as its own Greer County until 1896, but the Comanche, Kiowa, and others continued to visit the area seasonally as they had for hundreds of years. The drama of their eventual confinement on nearby reservations in the Indian Territory, bordering Greer County, played out all across the western reaches of the Red River, including present-day western and southwestern Oklahoma, and in adjacent areas of Texas.

With the destruction of the buffalo herds, the removal of the Indians, an ever-expanding rail system, and the increasing pressure to settle unclaimed land, eyes soon turned toward southwest Oklahoma. The environment was forbidding; the area was remote, there were few trees and so very little lumber, and water was scarce. Even in the 1880s, southwest Oklahoma was a difficult frontier. But the people adapted, as can be seen in the half-dugout on the museum grounds. The area developed rapidly, and by the early 1900s the region had well-established communities. 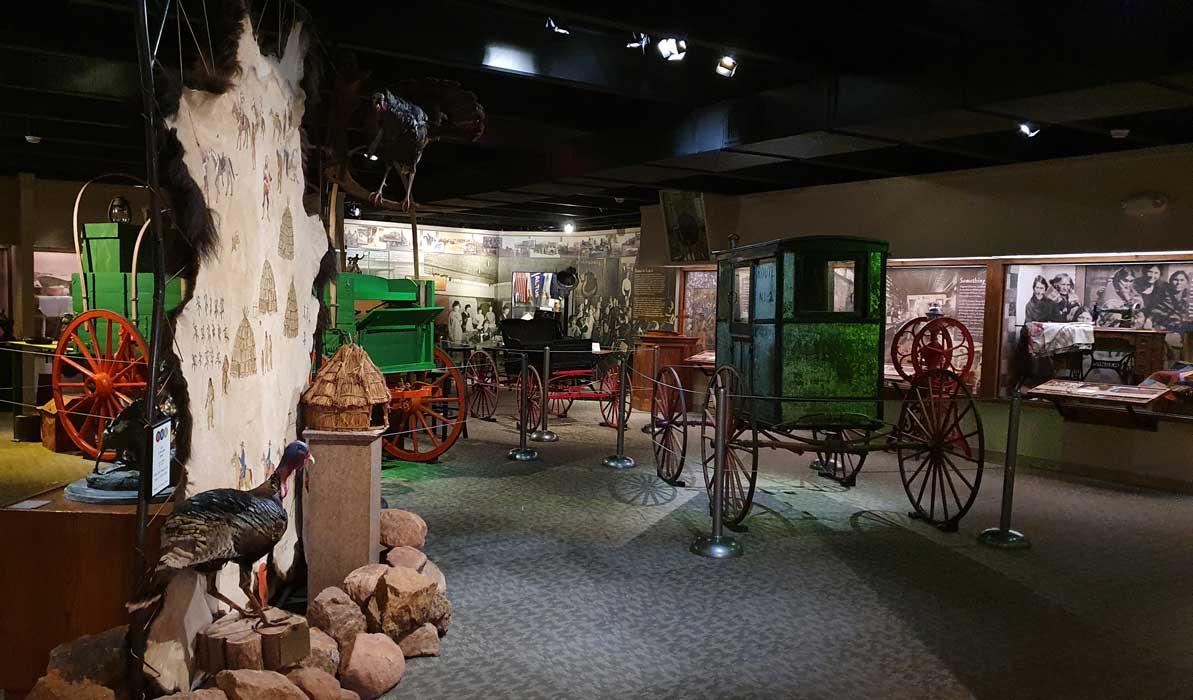 Exhibits in the McMahan Gallery

Both municipal growth and agricultural development emphasized the need for a large, stable water supply. Early successes such as Fullerton Dam on Turkey Creek near Olustee, Oklahoma, were followed by projects on the North Fork of the Red River. The Bureau of Reclamation completed Lake Altus in 1947, which irrigates approximately 48,000 acres in Southwest Oklahoma.

Today the western range of the Wichita Mountains presides over a largely agricultural base in southwest Oklahoma, although the economy depends heavily on the presence of Altus Air Force Base, activated in 1953. In recent decades business has begun to diversify, with new industry and tourism adding to the development of the area.

Photographs from the W. C. Austin Project are available on The Gateway to Oklahoma History. A project of the Bureau of Reclamation, the W. C. Austen Project provided water for irrigation, flood control, and included the Altus Dam and four canals.