The 45th Infantry Division in Korea

After World War II, the 45th returned to its National Guard classification. This time it was headquartered in Oklahoma only. With the outbreak of conflict between North Korea and South Korea in 1950, the prestigious Thunderbirds were called overseas once again. The 45th were one of only two National Guard divisions deployed to Korea. The division served in the Yonchon-Chorwon area, Old Baldy, Pork Chop Hill, Heartbreak Ridge, and Luke's Castle areas of then Korea. Many men were sent home by 1952 but soldiers from the 45th remained in Korea until the end of the war in 1953. In all, the 45th Division saw 429 days in battle, participating in four campaigns. The 45th Infantry Division was officially disbanded in 1963, ten years later. 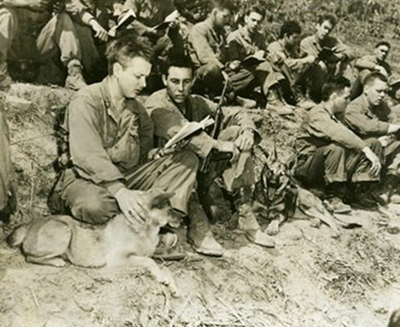 Men from the 45th at a makeshift church sermon in Korea (image courtesy of Korean War Educator). 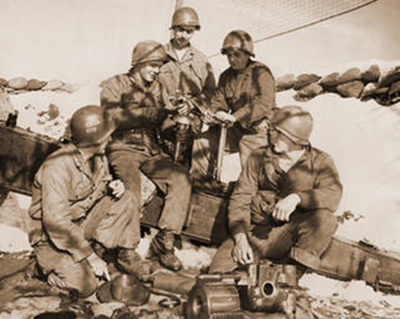 "Thunderbirds Prepare Deadly Greeting to Reds. Five Oklahomans, members of the 45th Division's 189th battalion, are shown cleaning their 155 millimeter howitzer during a lull on the Korean battlefront. Battery C of the 189th was the first unit of the former National Guard division to swing into action against the communists in Korea. From left to right are Pfc. Lawrence W. Leighton, 523 SW 34; and Pfc. Joe Brown. Cpl. Bob Boyer, Pfc. Fred L. Marquardt and Pfc. Hale Abernathy, all of Blackwell." 45th Division News, photo by Ron Pyer. (Published February 1, 1952, The Oklahoma City Times). 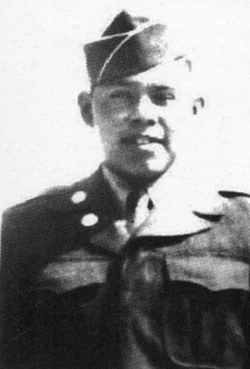 Charles George, a Cherokee originally from North Carolina, is the only member of the 45th to receive the Congressional Medal of Honor in the Korean War. George threw himself on top of a grenade to save his fellow men in November of 1952.

Pfc. George, a member of Company C, distinguished himself by conspicuous gallantry and outstanding courage above and beyond the call of duty in action against the enemy on the night of 30 November 1952. He was a member of a raiding party committed to engage the enemy and capture a prisoner for interrogation. Forging up the rugged slope of the key terrain feature, the group was subjected to intense mortar and machine gun fire and suffered several casualties. Throughout the advance, he fought valiantly and, upon reaching the crest of the hill, leaped into the trenches and closed with the enemy in hand-to-hand combat. When friendly troops were ordered to move back upon completion of the assignment, he and two comrades remained to cover the withdrawal. While in the process of leaving the trenches a hostile soldier hurled a grenade into their midst. Pfc. George shouted a warning to one comrade, pushed the other soldier out of danger, and, with full knowledge of the consequences, unhesitatingly threw himself upon the grenade, absorbing the full blast of the explosion. Although seriously wounded in this display of valor, he refrained from any outcry which would divulge the position of his companions. The two soldiers evacuated him to the forward aid station and shortly thereafter he succumbed to his wound. Pfc. George's indomitable courage, consummate devotion to duty, and willing self-sacrifice reflect the highest credit upon himself and uphold the finest traditions of the military service.