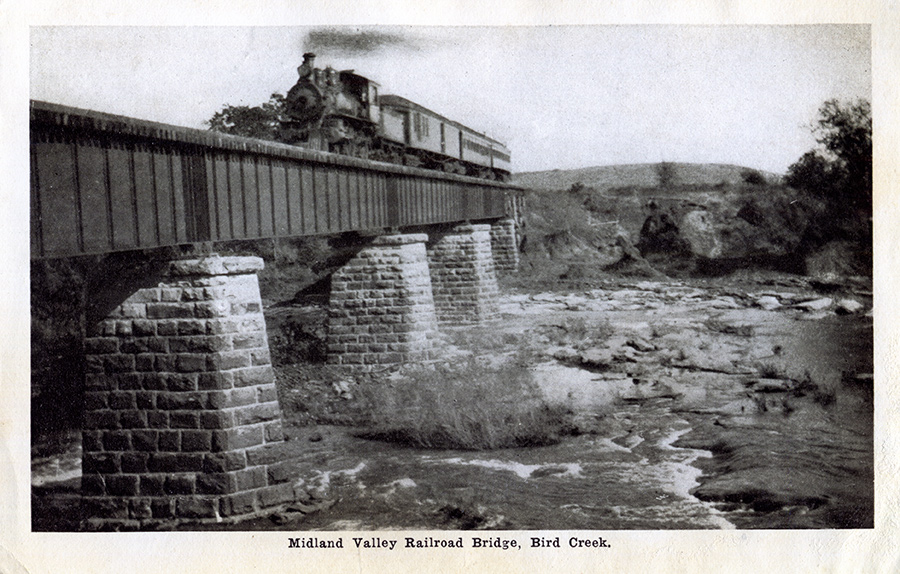 The Midland Valley Railroad Company was chartered in 1903 during the general boom in railroads in Oklahoma. Its promoters indended to construct a line from a point south of Fort Smith, Arkansas, toward Muskogee and from there northwest through Pawhuska and Arkansas City, Kansas, to Wichita. Majority stock ownership was vested in the Muskogee Company, a holding company with its corporate seat in Philadelphia, that also controlled the Kansas, Oklahoma and Gulf Railway. Building of the line started from Arkansas and reached Muskogee in 1904 and Tulsa and Barnsdall the next year. The whole line was finished by 1906. A branch from Jenks to tap the Glenn Pool oil field was opened in 1907 as far as Kiefer (abandoned in 1936) and brought in a lot of traffic to the Tulsa refineries. Passengers and goods reached Fort Smith, which was on the Midland Valley line, by trackage rights over the Frisco.

During the boom years in the oil fields, traffic was generally good, and local management meant that shippers' demands were adequately met. However, competition from other longer established carriers was severe, and during the Great Depression of the 1930s the Midland Valley suffered a sharp decline. The parent Muskogee Company acquired the Midland Valley outright in 1930, and in 1967 ownership was transferred to the Texas and Pacific Railroad, a subsidiary of the Missouri Pacific Railway (MoPac). The MoPac closed the sections north of Barnsdall and east of the Kansas City Southern main line in eastern Oklahoma in 1968 and operated the rest as branches of its own system. The Midland was a prime example of overoptimism and overbuilding of railroads in Oklahoma in the first decade of the twentieth century.

The following (as per The Chicago Manual of Style, 17th edition) is the preferred citation for articles:
Augustus J. Veenendaal, Jr., “Midland Valley Railroad,” The Encyclopedia of Oklahoma History and Culture, https://www.okhistory.org/publications/enc/entry?entry=MI008.