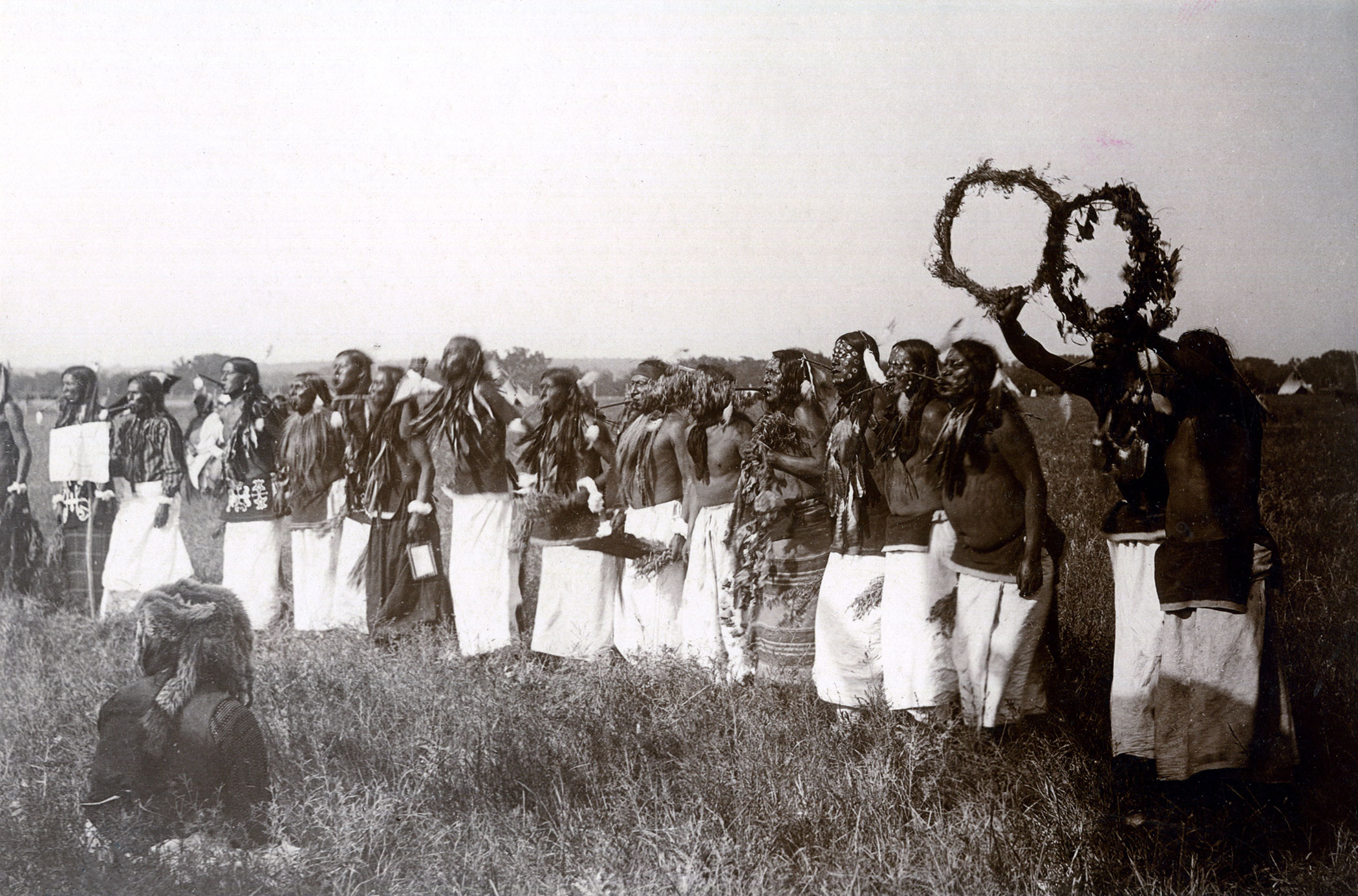 A public and dramatic annual American Indian religious ceremony held before the summer bison hunt, the sun dance spread across the Great Plains some time after 1800. The sun dance was a highlight of Oklahoma summer encampments among the Cheyenne, Ponca, and Kiowa. The Southern Arapaho of Oklahoma celebrated the sun dance among their northern kin.

The Ponca sun dance was a four-day ceremony of dancing, fasting, and prayer held in mid-summer when the corn was in silk. The event was held in a newly built, circular, enclosed arbor partially open to the sky. A tree was ritually cut down and placed in the center of the circle as a pole. A "thunderbird nest" was attached near the top of the pole. On the final day, young men attached themselves to the pole with rawhide thongs pegged through the skin of their chests and danced, looking up at the thunderbird nest. In 1902 anthropologist George A. Dorsey observed the ceremony and described the dancers. Their bodies were painted yellow, and each wore a bandolier of crow or hawk feathers and carried a large, round wreath of sage in his right hand.

Each summer after the sacred arrow renewal, the Cheyenne held their sun dance. It was a world-renewal ceremony offering prayers for the welfare of the people and for the increase of their resources. Men adorned with elaborate body paint pledged to dance and fast for four days. The correct ritual was taught to initiates by an instructor who had himself undergone the ordeal four times.

Among the Kiowa, an individual, prompted by a vision, pledged the dance. The quest for a personal vision was often the dancer's goal. The individual danced around a sun dance pole, which had a bison skull affixed to the top. After fasting, self-torture, and denying himself water, the dancer anticipated that he would become unconscious and receive a vision. The Kiowa held sun dances as early as 1860, with the purpose of replenishing the bison and the Kiowa people.

In the late 1800s the U.S. government made an attempt to suppress the sun dance. The Cheyenne ceremony "went underground" and reemerged in the twentieth century. The August 1890 Kiowa sun dance was disrupted by rumors of army patrols and the dance abandoned. However, in September of that year the first ghost dance was held, and for many years it took the place of the sun dance. The last Ponca sun dance was held in 1908. The policy of government suppression ended with the issuance of the 1934 circular Indian Religious Freedom and Indian Culture, and sun dances intermittently have continued to be held.

Leslie Spier, The Sun Dance of the Plains Indians: Its Development and Diffusion (New York: The Trustees, 1921).

The following (as per The Chicago Manual of Style, 17th edition) is the preferred citation for articles:
Gloria A. Young, “Sun Dance,” The Encyclopedia of Oklahoma History and Culture, https://www.okhistory.org/publications/enc/entry.php?entry=SU008.