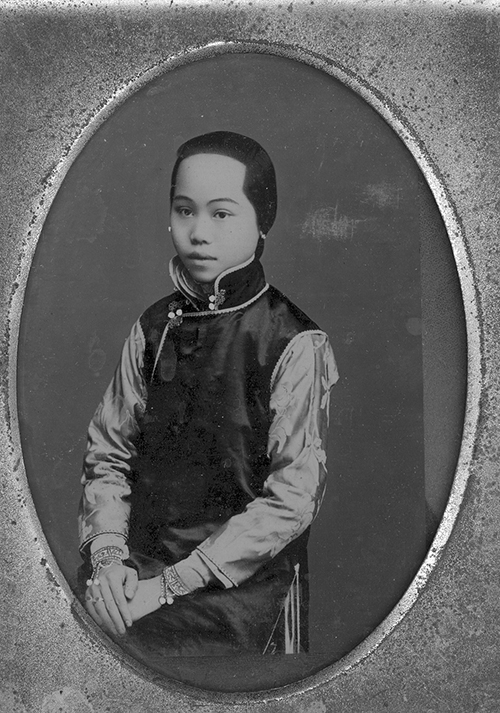 As the United States ended the twentieth century, its population included immigrants and temporary residents of more than twenty Asian nations, stretching from the Pacific Islands to China and Japan to Vietnam, Cambodia, and India. They had begun arriving in the mid-nineteenth century. Similarly, Asian immigrants came to Oklahoma in small numbers in that century, but the state developed a large Asian presence only in the 1970s, well behind the states of the West Coast.

Before the mid-nineteenth century most Asian nations prohibited emigration, and it did not begin in earnest until the opening of Chinese ports to U.S. merchant ships in 1784. Japan opened its ports in the 1860s and Korea in 1882. Over that hundred years, many men from those nations immigrated to Hawaii, then a U.S. territory. With the Gold Rush, thousands of Chinese settled in California and along the West Coast. Almost all were unmarried yeoman farmers and artisans, sojourners who intended to make money and return home to marry. Segregated from whites, they clustered in enclaves in San Francisco, Los Angeles, and other cities. By the 1880s thousands of Asians performed manual labor in the West's mines, fisheries, canneries, and farms.

By then, however, native-born white Americans began to complain that Asian laborers provided too much competition for jobs. In 1882 Congress passed the Chinese Exclusion Act, the first of several specifically aimed at stopping the flow of Chinese laborers to the United States and barring resident Chinese from naturalized citizenship. Nonetheless, a few Chinese men did legally enter: 26 in 1888, 118 in 1889, 1,716 in 1890, and 2,836 in 1891. By 1890 they numbered more than 107,000 before laws in 1892 and 1902 ended all immigration. After that, Japanese workers took advantage of the opportunity available in various industries. Because Japanese immigration rapidly increased, after 1907 immigration control was also applied to them. Koreans began immigrating in 1882.

The Chinese were the first Asian group to become dispersed around the United States. As mining played out, they found work on transcontinental railroad construction crews throughout the West. Some stayed permanently in new railroad towns. There they engaged in occupations pursued also by urban Chinese on the West Coast. Although some worked for white business owners, they preferred to own their own small laundries and restaurants, easy to start with little money or equipment.

The Chinese were also the first Asians to settle in Oklahoma. Chinese men lived in Guthrie, Oklahoma Territory, soon after the Land Run of 1889. They may first have seen the territory as railroad workers when the Southern Kansas Railway (later the Atchison, Topeka and Santa Fe Railway) constructed its line from Kansas through the Unassigned Lands in 1886–87, or they may have come as cooks or laundrymen with the U.S. Army in 1889. Tom Sing Laundry, photographed in Guthrie in 1889, is the earliest identifiably Chinese business in the region. An 1889 Oklahoma City directory lists five Chinese-owned laundries and a presumed population of eighteen men. The 1890 U.S. census reported 38 men (in both territories), the 1900 census, 58 (both territories), and the 1907 census, 69. That number doubled by 1910 and doubled again by 1920, to 261. The Chinese population was dispersed around Oklahoma in the early statehood period. Many towns had a laundry or a restaurant operated by a Chinese person. In those years virtually all of the men were single, and in larger towns they often lived together in common quarters and worked together in a business.

In Oklahoma City a small, virtually invisible "Chinatown" appeared downtown along West California and South Robinson streets. There the men lived in basements and sub-basements, accessed by alley stairways, and often joined by underground passageways. By day working at street level in public restaurants, laundries, and other places, the men operated basement-level restaurants and stores for their own community. (Their subterranean living arrangements gave rise to a persistent urban legend about "Chinese tunnels" under the streets.) They kept up traditional religious and other cultural practices, as much as possible, and entertained themselves by gambling and other activities. They worked hard and kept a low profile. In 1921 Oklahoma Health Department officials and a reporter with the Daily Oklahoman inspected the city's Chinese colony. They estimated it to number two hundred at that time, but the 1920 census had recorded only 110.

The advent of the Great Depression created an exodus, and in 1930 only 206 were counted in the state's census. By 1940, on the eve of World War II, only 112 Chinese remained in Oklahoma. Over that time they had remained in the restaurant and laundry businesses and were still nearly all single men. Two were merchants, one of whom, Willie Hong, was his community's leader and headed a Relief Committee to support Chinese resistance to the Japanese invasion of China. Until the 1950s the Chinese were Oklahoma's largest Asian group. While their numbers continued to grow, reaching 2,461 by 1980, they were surpassed by the Japanese and other nationalities.

Japanese immigration to the American mainland began circa 1870 and continued through 1924. Roughly two hundred thousand came to the United States in 1891–1924, one third of them in 1910–20. The first who arrived were generally middle class, rural, and male and had four to six years of education. Like the Chinese, they found work as farm labor, but they also worked in mining, canning, meat-packing, and other industries. Generally, however, they gravitated toward agricultural occupations as the need for farm labor grew in western states. They also became contract gardeners and gardeners on estates, and when possible they started their own truck farms and sold vegetables at markets. In Oklahoma, the 1907 census recorded four Japanese in Indian Territory and two in Oklahoma Territory, and the 1910 census, 48. Two were servants in the household of Oklahoma City real estate developer Charles F. Colcord, and a family of four plus two men were gardeners at the Episcopal bishop's estate in Oklahoma City. Twenty-three, presumably here only temporarily, were railroad laborers in south Logan County. The others were cooks in various small towns, and two were truck farmers in Kingfisher County.

In the next decade the picture changed considerably, as the state's Japanese population doubled and also became more urbanized. In 1920, when they numbered 67, still mostly single men, a third of them were butlers or servants in the households of wealthy white Oklahomans, a third were restaurant owners or cooks, a third followed other urban occupations, and only three were farmers. In 1930 the population of 104 was concentrated in Oklahoma City, Tulsa, Bartlesville, and Ponca City, reflecting the social and economic status of "oil barons" with expansive estates and large mansions. Lew Wentz, Henry V. Foster, and John, Frank, and Lee Phillips all employed Japanese gardeners and servants.

The United States' entry into World War II in December 1941, after Japan attacked Pearl Harbor, placed Japanese Oklahomans in a tenuous position. By that time, some of them and their children had been born U.S. citizens. Anti-Japanese sentiment surfaced everywhere, and in Oklahoma City a Japanese store was vandalized and forced to close. Gov. Leon Phillips immediately issued a proclamation urging Oklahomans to refrain from violence and intimidation. His quick action calmed the waters. For the duration of the war the Japanese were left alone, and none were removed or interned. Eddie Nakayama, a 1941 Central High School graduate and engineering student and Reserve Officers' Training Corps participant at the University of Oklahoma, joined the U.S. Army after graduating in 1944, as had his older brother, Oliver, a sergeant in the U.S. Army Air Corps. The family of Kutaro Nishimuta, truck farmers in Payne County, had four sons who served in the U.S. Army 442nd Regimental Unit, an all-Japanese outfit and one of the most decorated units in the war. Oklahoma's Japanese population grew considerably after war's end, with some soldiers bringing home brides. The McCarran-Walter Act reopened Asian Immigration in 1952, and by 1960, 749 Japanese and their families lived in the state. The figure tripled by 1990 when the census recorded 2,385.

The Philippine Islands, a U.S. possession, provided a few immigrants to Oklahoma in 1910–30. By 1930 most of the twenty-one resident Filipinos worked as cooks, servants, and butlers in larger towns. However, at least two were professionals. In the last half of the century, because of new immigration laws, the state's Filipino population grew to 3,024 in 1990 and 4,028 in 2000. Of those, 1,261 resided in Oklahoma County and 642 in Tulsa County.

Although Koreans had begun coming to the United States in the 1880s, serious immigration began only after the Korean Conflict and the McCarran Act. Those who came were primarily wives of military personnel. The Immigration Act of 1965 allowed Koreans to pursue jobs and education in the United States. Nationally, the population experienced very rapid growth in the 1970s, with 70,000 in 1970 increasing to 354,593 in 1980, largely through immigration. Most of them settled in urban areas. Early censuses reveal only three who resided in Oklahoma in the first half of the twentieth century. A figure of 180 was counted in 1960; most were war brides or immigrants under the family reunification program. After that time their numbers rapidly increased, to 673 in 1970, 2,698 in 1980, and 4,716 in 1990. By 1980, 71 percent were female, primarily wives of military men, and more than 50 percent lived in Comanche County where Fort Sill is located. The others clustered in metropolitan areas having large universities, including Tulsa, Stillwater, and Norman, and engaged in teaching, operating small businesses, and practicing medicine. Operating tae-kwon-do schools has proven to be an economic niche activity for Koreans.

The following (as per The Chicago Manual of Style, 17th edition) is the preferred citation for articles:
Dianna Everett, “Asians,” The Encyclopedia of Oklahoma History and Culture, https://www.okhistory.org/publications/enc/entry.php?entry=AS006.