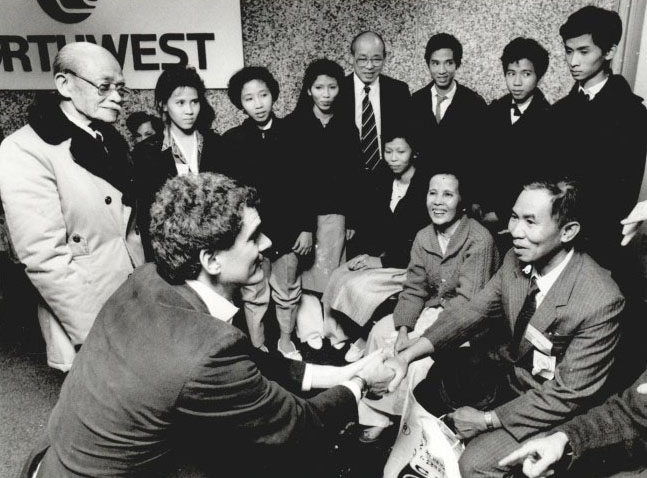 The first large-scale immigration into Oklahoma began with the forced resettlement of many American Indian groups from the eastern United States. Throughout the nineteenth century other tribal groups from the Midwest and West were brought to this area until more than sixty tribes and nations were relocated here. In addition to these, many African American slaves were brought to Oklahoma by Indian slave owners from the southern states. With the opening of the Unassigned Lands of central Oklahoma to non-Indian settlement in 1889, settlers of European origin flooded into the area seeking homesteads and business opportunities in the newly established communities. Many of these new settlers were born in Europe and had come to the United States seeking better economic opportunities. They brought with them their languages, religions, and customs. Oklahoma, thus, became a land of many cultures.

Many of these immigrants of the late nineteenth century and the early twentieth century were the so-called "new immigrants," Asians, Jews, Italians, Poles, and Slavs. The earlier arrivals in the United States had been drawn primarily from Britain and Germany. The origins of the European settlers in Oklahoma reflected this new wave of immigrants.

In 1910, the year of the first United States decennial census after 1907 statehood for Oklahoma, the total population of Oklahoma was 1,657,155. More than 8 percent of this population, 137,612, was African American. Another 4.5 percent, 74,825, was American Indian. Finally, 40,084 individuals were foreign born, or 2.8 percent of the total population. It should be noted, however, that an additional 94,044 had been born in the United States but were of foreign parentage.

The national origins of these foreign born and native born of foreign parents presents an interesting pattern. By far the greatest number were of German origin, 27,599. Those from Russia numbered 13,160. Other sizable populations were drawn from Austria (more than 7,000), Ireland (more than 6,000), England (5,000), Canada (more than 4,000), Italy (more than 3,000), Mexico (more than 2,600), and Scotland (about 2,300). Other nations that were represented included: Denmark, France, Greece, Holland, Hungary, Norway, Sweden, Switzerland, Turkey, and Wales.

In an article titled "European Immigrants in Oklahoma: A Survey" (The Chronicles of Oklahoma 52 [Summer 1975]) Douglas Hale mapped the distribution of the major European groups in Oklahoma. The natives of Germany were concentrated in the north-central region of the state. Most were farmers. However, a number settled in towns and cities and became successful businessmen. Anti-German feeling during World War I brought an end to German-language schools and most German-language newspapers and reduced the use of German in church services.

The natives of Russia present an interesting reflection on European history. After 1763 Germans had been encouraged to colonize parts of Czarist Russia. Most of these Germans inhabited self-contained and largely autonomous colonies with their own schools and churches. The Russian government, in order to attract these colonists, offered free land, exemption from military conscription, freedom of religion, and local self-government. After a century of settlement, in 1871 the Russian government changed its policy and revoked many of the privileges and exemptions that had attracted the Germans to Russia. This was an attempt to assimilate this minority population into the Russian society. However, for most Germans in Russia these restrictions forced them to seek a new homeland where they could continue their traditional practices. Between 1900 and 1914 almost 150,000 Germans from Russia immigrated to the United States and settled primarily on farms in the Great Plains. In Oklahoma these settlers founded Mennonite and Lutheran communities in west-central Oklahoma and in the Oklahoma Panhandle. It is especially interesting to note that in 1910 only 143 residents of Oklahoma listed Russian as their mother tongue, but more than 5,800 were listed as born in Russia.

Virtually every European country was represented in greater or smaller degree as the Twin Territories developed in the late nineteenth and early twentieth centuries. The Oklahoma settlers from Austria-Hungary were primary Czechs. These Czechs settled on farms in the north-central counties of Oklahoma and in the southeastern counties around McAlester. Many Czechs also became successful businessmen, selling farm equipment and operating flour mills. Individuals of Italian origin settled primarily in the mining areas of southeastern Oklahoma—Pittsburg, Coal, and Latimer counties. Initially, most of the Italians worked in the coal mines, but in a short time many miners bought land for farms and others went into business. The Oklahoma settlers born in Ireland were widely scattered across the state, with a concentration in Noble County and Oklahoma County. Like the Irish, English settlers located across Oklahoma in a scattered pattern.

Before the turn of the nineteenth century immigrants also arrived from the countries of the Middle East, including Lebanon and Turkey. They came to be called "Syrian Lebanese" and by 1920 lived in forty-two of the state's seventy-seven counties. A large number of them ultimately settled in the Oklahoma City area and opened various businesses. An Arab American community developed after World War II as students and professionals escaped unsettled conditions in their homelands. By 1990 nearly seven thousand Oklahomans identified themselves as of Arab ancestry.

Perhaps the one group that has not received its due credit in Oklahoma history is the Mexican American group. With the internal political problems that were occurring in Mexico at the turn of the century, many Mexicans were attracted to Oklahoma for employment opportunities. Usually coming as single men, they worked on the railroads, in the mines, and in the harvests. Most initially planned to return to their homeland after accumulating some earnings. The relatively close proximity of Mexico to Oklahoma allowed Mexicans easy access to the state. The Great Depression years of the 1930s saw a decrease in the flow of Mexicans north of the Red River, but since the 1950s the increase has been significant. Today sizable numbers of them can be found in the major urban areas of Oklahoma City and Tulsa, as well as in the rural areas around Lawton and McAlester and in the Panhandle.

Until the mid-1970s Asian Americans were few in number. In 1910 only 139 Chinese were listed in Oklahoma, of which 101 were in Oklahoma County, and 48 Japanese, half of whom were in Logan County. The use of Mexicans for railroad construction and maintenance and the restrictionist laws that limited Asian immigration into the United States after 1882 may account for this period of low Asian-American population.

In 1975, however, with the fall of South Vietnam Oklahoma became the home of a number of Indochinese refugees, mostly Vietnamese. By 1980 the number of Indochinese refugees had grown to more than 6,500, and in the next decade the number was about 10,000. Most of this group is located in Oklahoma City, with a smaller number in Tulsa. The Vietnamese refugees have made a remarkable adjustment to their new homeland. Assisted by the Vietnamese-American Association, they have found employment, established businesses, such as grocery stores, restaurants, tailor shops, and even real estate agencies, and are continuing to worship in Buddhist temples as well as in Catholic Churches, which have scheduled masses in Vietnamese. The 1980s was a period in which large numbers of other Asian groups—the Chinese, Koreans, Asian Indians, Filipinos, and Japanese—moved to Oklahoma as well.

By the year 2000 the state was a Joseph's coat of peoples both native and immigrant. The newer arrivals strive to maintain some of the traditional practices of their parent cultures, but, as with all immigrants to this nation, there is constant melding of old and new ways as groups work to coexist within the framework of American society. The mix of ethnicities in the Sooner State continues to reflect conditions generally prevailing throughout the United States.

Tom Caldwell, "From the Hills of Lebanon: The Syrian-Lebanese in Oklahoma," The Chronicles of Oklahoma 64 (Summer 1986).

Douglas Hale, The Germans from Russia in Oklahoma (Norman: University of Oklahoma Press, 1980).

Michael J. Hightower, "The Road to Russian Hill: A Story of Immigration and Coal Mining," The Chronicles of Oklahoma 63 (Fall 1985).

The following (as per The Chicago Manual of Style, 17th edition) is the preferred citation for articles:
Donald N. Brown, “Immigration,” The Encyclopedia of Oklahoma History and Culture, https://www.okhistory.org/publications/enc/entry.php?entry=IM001.