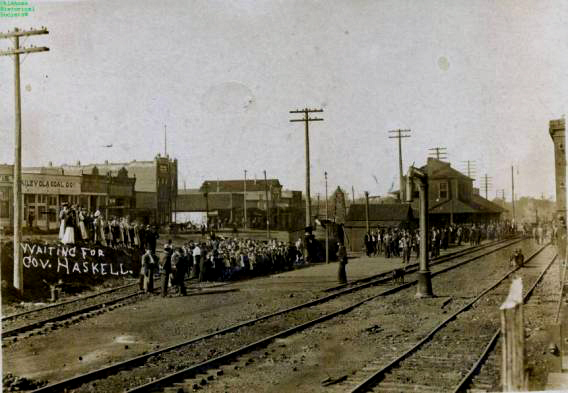 Located in Pittsburg County, Haileyville lies at the junction of U.S. Highway 270/State Highway 1 and State Highway 63, fourteen miles east of McAlester and a little more than one mile west of Hartshorne. The French explorer Jean Baptiste Bénard de La Harpe first mapped the site of Haileyville in 1719 during his expedition to the Arkansas River. In 1898 D. M. Hailey, M.D., established the town of Haileyville when he claimed a tract of land east of McAlester and opened the area's first coal mines. A confederate veteran, Hailey had first moved into Indian Territory in 1868 to practice medicine and before long had become involved in several business ventures. His mining investments began when he and James Elliot started the Hailey-Ola Mining Company, leasing coal land from the Choctaw, Oklahoma and Gulf Railroad, which laid tracks in the area in 1889–90. The first mine, named Number One Slope, began production on St. Patrick's Day in 1899.

Haileyville, in the Choctaw Nation, was a company town, which was a common feature of coal-mining communities. Italians, American Indians, Russians, and Americans comprised most of Haileyville, and many worked in the mines or on the railroads. Coal from the area was only profitable due to the railroad junction. The town was home to the freight and passenger offices of the Choctaw, Oklahoma and Gulf Railroad, which later became the Chicago, Rock Island and Pacific Railway Company (Rock Island). By 1902 the railroad had 1,052 miles of track, including a branch from the town that ran to Ardmore. Haileyville remained the division point of the Rock Island Railroad until 1958 when the offices moved to El Reno.

On April 20, 1901, the U.S. Post Office Department designated a Haileyville post office. The 1907 population stood at 1,452, and it climbed to 2,024 in 1910. In 1911 a bank, the New State newspaper, five hotels, three doctors, and several retail and other businesses served the residents. The community and its close neighbor, Hartshorne, are known as the "twin cities" of Pittsburg County due to their proximity. Gov. Lee Cruce proclaimed Haileyville a first class city on February 12, 1912. After a 2,067 population in 1920, the number of residents declined to 1,801 in 1930, 1,183 in 1940, and 922 in 1960. In 1946 one coal company, a bank, and an ice plant were the main businesses, with gas stations, grocery stores, and a hardware store. After the coal mines closed, lumber, farming, and ranching became the primary modes of production.

Newspapers that have served the town include the Headlight Journal, the New State, the Haileyville Herald, and the Haileyville Signal. The public education system dates to 1903 when residents constructed a building that eventually housed the school. In 2000 the prekindergarten-through-twelfth-grade school district enrolled 498 students. The 2000 population stood at 891 and in 2010 at 813.

The following (as per The Chicago Manual of Style, 17th edition) is the preferred citation for articles:
Stephanie Lynn Shafer, “Haileyville,” The Encyclopedia of Oklahoma History and Culture, https://www.okhistory.org/publications/enc/entry.php?entry=HA001.