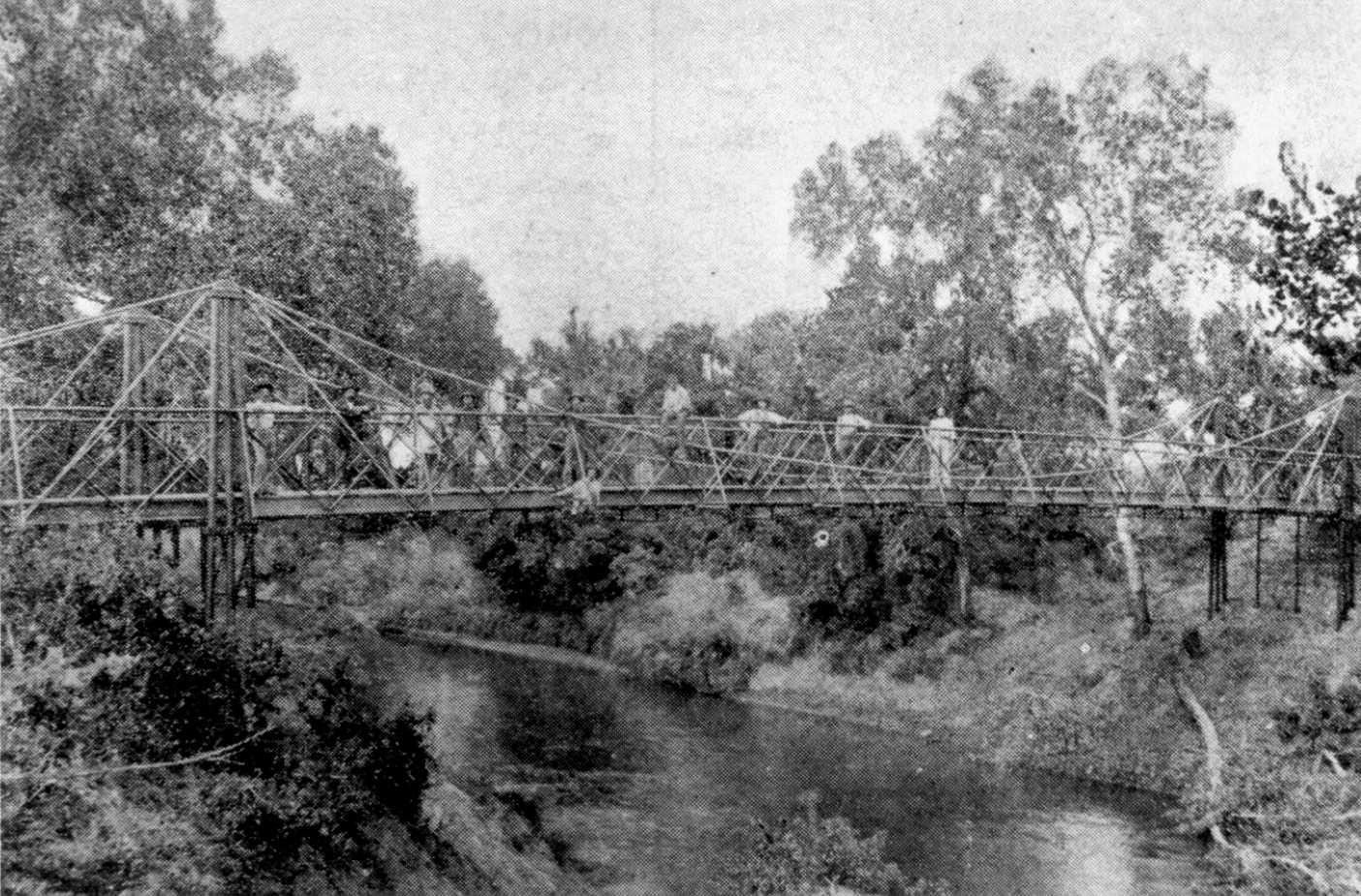 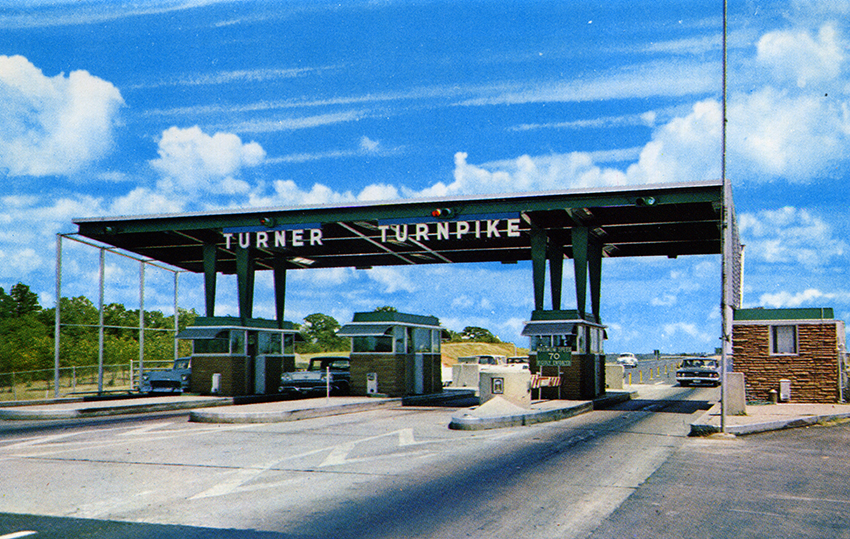 Bridges and roads that charge tolls have historically been a feature of travel across Oklahoma. From the 1930s the Indian nations issued permits to their citizens to erect bridges and maintain roads. For example, travelers who ventured across the Choctaw Nation on the Butterfield Overland Mail's stage route in the mid- to late-nineteenth century paid to use turnpikes such as that maintained by Wade Hampton near Pulchur in Pittsburg County, by Jack McCurtain near Red Oak in Latimer County, and by Olasechubi at Mountain Station in Latimer County. Similarly, numerous toll bridges enabled (or blocked) passage across waterways through that region, such as Charles LeFlore's across Clear Boggy east of Boggy Depot and David Folsom's on Blue River. In 1888 the Choctaw Nation authorized the Fort Smith and Choctaw Bridge Company to erect a toll structure across the Poteau River. After 1907 statehood the earliest known toll road, with three toll gates, was established by a private company in 1916 and ran from Chelsea to Claremore in Rogers County. The county assumed its operation in late 1919.

Well into the twentieth century private toll bridges operated on roads that the state government constructed. These included the Lexington-Purcell bridge built across the Canadian in 1911, the Byers suspension bridge across the Red River, built in 1914 on the Meridian Highway, the Grand River bridge at Bernice, and the Key bridge, a suspension structure placed across the Canadian at Bridgeport in 1921. By 1928 seven suspension or "swinging" toll bridges aided travel across the Red between Oklahoma and Texas, and by 1930 a total of seventeen toll and three free structures spanned that river. Numerous others operated on highways across other waterways, including one on the Jefferson Highway across the Canadian between Eufaula and McAlester. By allowing private companies to build and operate these facilities, the state avoided the cost of construction and maintenance but still completed useable highways.

Beginning in the mid-1920s public objections against paying to use transportation facilities brought an end to the toll system in the 1930s. The Twelfth Legislature passed a toll bridge act under which the State Highway Commission could purchase privately owned toll bridges, and soon the structures over the Canadian River, at Ada-Konawa, at Bridgeport, and at Lexington-Purcell became state property and could be used for free. The Highway Commission gradually acquired other private toll bridges on state highways and made them free to the public. Beginning in 1929 the state took responsibility for bridge placement and construction, approving public structures near Sand Springs, Lawton, Roll (in Roger Mills County), and elsewhere. However, as late as 1936 private corporations still operated seven toll bridges.

Perhaps the most famous incident in Oklahoma transportation history is the "Red River Bridge War" of July 1931. It resulted from the construction of three free bridges across the Red River on U.S. Highways 77 (south of Marietta, at Gainesville), 75 (south of Colbert, at Denison), and 81 (at Terral) by the States of Oklahoma and Texas under an interstate agreement made in 1929. The operators of private toll bridges, already in use on those roads, objected to the opening of free bridges before the toll bridges had recouped their costs. The owners of the U.S. 75 toll bridge at Denison obtained a federal injunction blocking the opening of the free bridge, and Texas Rangers barricaded it on the Texas side. In reaction, Gov. William "Alfalfa Bill" Murray declared martial law, sent the Oklahoma National Guard to destroy the northern approaches to the toll bridge, and stationed armed troopers on both sides of the river to keep the free bridge open. A gun-toting Murray made a personal visit to the site, and newspapers hailed him as "Horatio at the Bridge." In August a federal court dissolved the injunction, and the affair lived on, mostly in Murray's personal legend. By the end of 1934 twelve bridges crossed the Red, eleven of which were free, the only toll facility being on State Highway 57 southwest of Idabel.

During World War II the toll idea resurfaced, this time involving highways. Led by Gov. Roy J. Turner, after the war the Senate and House collaborated to establish the Oklahoma Turnpike Authority (OTA), a legislative measure that Turner signed into law April 1947. The first members of the commission were the governor (Turner), J. Wiley Richardson of Oklahoma City, Joe R. Jarboe of Tulsa, Paul Wilson of Stroud, and R. P. Matthews of Sapulpa. The commission was authorized to issue bonds, to construct, operate and maintain the highway, and to return it to the Highway Commission when its cost was recouped. After opponents questioned the legality of road financing through a bond issue, a legal suit proceeded through the state courts and eventually to the U.S. Supreme Court, which refused to consider the appeal. Subsequently, ground was broken on December 20, 1950, near Sapulpa by Governor Turner, and construction began. The eighty-eight-mile-long Turner Turnpike, generally paralleling U.S. 66 between the two cities, opened in spring 1953. (Route 66 remained a free road and became the stuff of legend.) Thousands of people used the Turner Turnpike, and revenues mounted. Thus encouraged, state officials wanted more self-supporting roads.

During the 1950s and 1960s the turnpike system significantly expanded. OTA successively financed and opened the eighty-eight-mile-long Will Rogers Turnpike between Tulsa and Miami and northeast to Missouri in 1957, the H. E. Bailey Turnpike, ninety-four miles from Oklahoma City through Lawton to the Red River in 1964, the Indian Nations Turnpike, 105 miles from U.S. 70 at Hugo northward to Henryetta (on Interstate 40) in 1966, the Muskogee Turnpike, fifty-three miles south from Tulsa to Webbers Falls (on Interstate 40) in 1969, and the Cimarron Turnpike, sixty-eight miles from Tulsa west to Interstate 35 in 1975. After a sixteen-year hiatus four new toll roads opened in the 1990s, including in 1991 the Chickasaw Turnpike, a seventeen-mile stretch between Ada and Sulphur, the Cherokee Turnpike, thirty-three miles between Locust Grove and West Siloam Springs, and the John Kilpatrick Turnpike across northern Oklahoma City, connecting the Turner Turnpike with Interstate 40 by 2001, and in 1992 the Creek Turnpike, thirty-four miles between the Turner and the Will Rogers, passing through eastern Tulsa. Thus by the year 2001 the Oklahoma Turnpike Authority operated ten toll roads comprising 612 miles, 5 percent of the state system. Out-of-state motorists paid approximately 40 percent of the tolls collected on Oklahoma's turnpikes.

The following (as per The Chicago Manual of Style, 17th edition) is the preferred citation for articles:
Dianna Everett, “Turnpikes and Toll Bridges,” The Encyclopedia of Oklahoma History and Culture, https://www.okhistory.org/publications/enc/entry.php?entry=TU022.