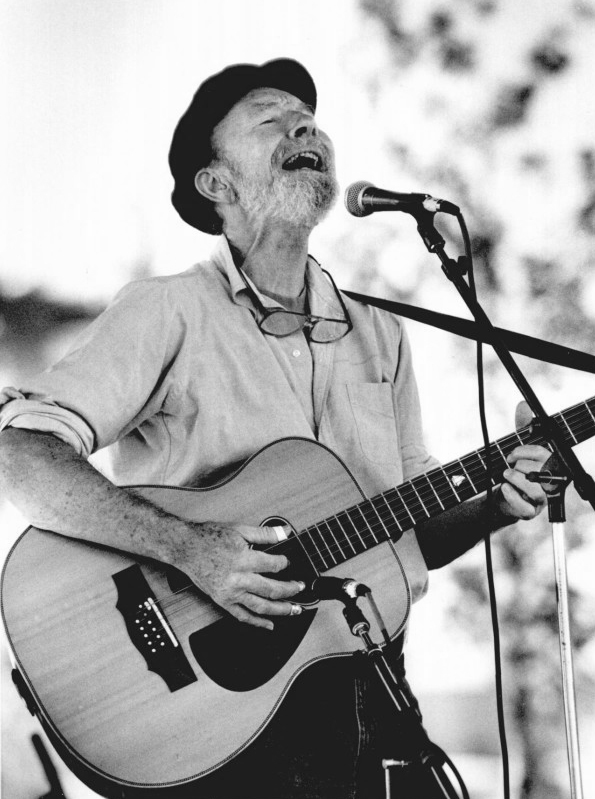 A five-day celebration in Okemah, the Woody Guthrie Folk Festival commemorates the birthday and life of one of Oklahoma's and America's eminent singer-songwriters, Woody Guthrie. Born on July 14, 1912, in Okemah, he gave a voice to many of the "Okie" immigrants who abandoned not only Oklahoma but also surrounding states during the Great Depression. Guthrie died of Huntington's Disease on October 3, 1967, leaving a controversial but lasting legacy that included songs such as "This Land is Your Land," "Oklahoma Hills," "Do Re Mi," and "The Ballad of Tom Joad."

Okemah initiated the tribute festival in July 1998, attracting musicians such as Arlo Guthrie (Guthrie's son), Tom Paxton, Billy Bragg, Jimmy LaFave, Kevin Welch, and Ray Wylie Hubbard. Many of these artists return to perform at the annual event. Arlo Guthrie supported the festival after organizers assured him that admission would be free and that musicians would not be paid to play. Other renowned singers who have appeared at later events were Pete Seeger, Jackson Browne, Ramblin' Jack Elliot, Steve Young, and Arlo Guthrie's daughter, Sarah Lee Guthrie Irion.

Despite a few local residents' objections, citing Guthrie's alleged (but unproven) ties to the Communist Party, the festival has been successful. Produced by the Woody Guthrie Coalition, it attracts music lovers from around the world. During the event there are conferences on Huntington's disease as well as fund raising for medical research. Woody Guthrie also penned children's songs, and organizers have incorporated a children's fair that offers many activities along with music.

Oklahoma has paid tribute to Guthrie in numerous ways since his 1967 death. In the early 1970s a Woody Guthrie Festival was held on the University of Oklahoma campus. Oklahoma City has hosted various tribute concerts. A 1979 event featured former Guthrie partner Sonny Terry. Beginning in the 1990s and continuing into the twenty-first century festivals have been held at venues throughout the capital city. Tulsa also has held Guthrie concerts, including a 1997 fund raiser at legendary Cain's Ballroom. In 1997 the Oklahoma Music Hall of Fame selected Guthrie for its first class of inductees, along with Merle Haggard, Patti Page, and Claude "Fiddler" Williams. In spring 2002 the Oklahoma Historical Society hosted This Land is Your Land: The Life and Legacy of Woody Guthrie, a traveling exhibit that had previously been displayed at the Smithsonian Institution's National Museum of American History in Washington, D.C.

The following (as per The Chicago Manual of Style, 17th edition) is the preferred citation for articles:
Larry O'Dell, “Woody Guthrie Folk Festival,” The Encyclopedia of Oklahoma History and Culture, https://www.okhistory.org/publications/enc/entry?entry=WO018.