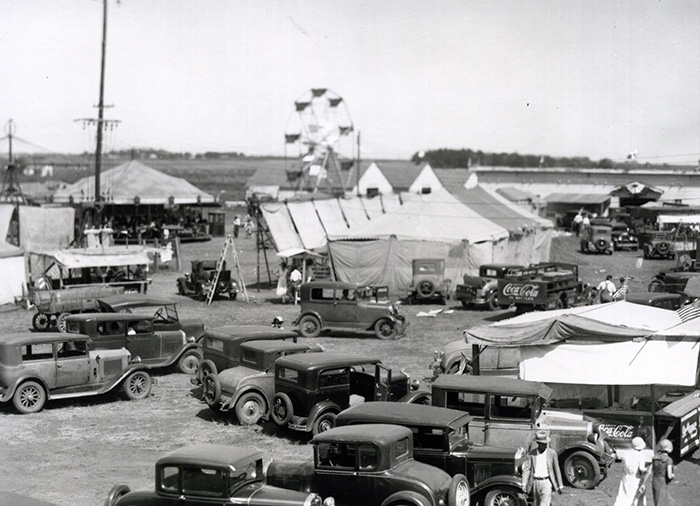 Rural and small-town Oklahomans of the late 1800s and 1900s viewed county and state fairs as an annual social ritual, but here and elsewhere in the United States the agricultural fair typically offered vocational education for adults and youth. A European tradition established during the Middle Ages, fairs originally served either a religious or a commercial purpose. Dating to 1810, American fairs were first organized by agricultural societies whose members discussed crops, livestock, and land use. The annual event awarded premiums (prizes) for the best (not the biggest) specimens of crops and animals. The main purpose was to educate farmers. In the 1840s manufacturers began using fairs to exhibit new plows, planters, and reapers, but that also promoted efficient cultivation and better crops. The first state fair was held in September 1841 in New York, and other states followed suit.

In an agricultural nation, particularly in the Midwest and Northeast, fairs proved popular. They drew isolated farm families to towns, county seats, and state capitals to socialize with friends, learn about improved seed varieties and livestock breeds, and marvel at new equipment. Fairs were usually held in the early autumn, after crops had been gathered. The development of the nation's fairs is repeated in the history of fairs in Indian and Oklahoma territories and the state.

Like the United States, Indian Territory's main economic activities involved agriculture. Not surprisingly, farmers among the southeastern Indian nations, removed west in the 1830s, formed agricultural organizations. The Cherokee Agricultural Society in 1845 held the territory's first fair. The Cherokee Farmers' Club revived it in October 1870, and both men and women exhibited "articles of home manufacture." As noted by the Cherokee Advocate, the displays would "speak effectually for our National standing and progress for those of our white friends who have a mind to come." In September 1871 in Tahlequah the Cherokee Agricultural Society, Rev. Stephen Foreman, president, held the second fair. Foreman won "best" for his Irish potatoes, apples, peaches, and fresh preserves, R. O. Ross for his saddle horse, Mrs. Eagle for cotton cloth, and Mrs. R. Ross for tatting.

These successful gatherings stimulated an Indian International Fair in autumn 1875. Creek and Cherokee leaders held an intertribal agricultural exposition at Muskogee in the Creek Nation. The event included competitions, edifying exhibits, horse racing, and a ladies' saddle-horse contest. Through the century the Muskogee fair continued, and other Indian fairs occurred irregularly in I.T. The Cherokees in 1876 decided to hold their own event at Fort Gibson. The National Council formed a Fair and Agricultural Association, a corporation that sold shares, set up the fair, provided the premiums, and charged admission. Board members included Dennis Bushyhead and Daniel Ross. In 1882 Vinita businessmen established the territory's first town-and-county fair.

As midwesterners moved into Oklahoma Territory with the land runs, agricultural fairs became an autumn staple. Beaver County, in the Panhandle, claimed to be holding the territory's first fair when residents gathered in mid-September 1891. In this period commercial clubs often organized fairs, actually little more than trade carnivals, to bring customers to town. Five-month-old Oklahoma City held its first fair in 1889 and promoted expositions through the 1890s. In 1892 the first "Oklahoma Territorial Fair" was held in Oklahoma City. Cleveland County held its first annual fair in Norman in November 1893. Towns and counties with fairs in the 1890s included El Reno (1894), Newkirk (1896), Cloud Chief (1897), Payne County (1893), and "G" County (at Arapaho, 1895).

In the early twentieth century community "crop carnivals" also proved popular (not to be confused with true agricultural fairs). These celebrated the corn, cotton, or wheat harvest. Often the real purpose was to advertise a town or a county. These festivals did not always attempt to share information on horticulture or homemaking, and the agricultural "exhibits" sometimes featured freaks—the biggest, not necessarily the best, ear of corn, cotton boll, pumpkin, and so forth, or oddities of nature like three-legged chickens. Traveling amusement shows provided a "midway."

Realizing agriculture's importance to the economy, Oklahoma's territorial and state government tried to modernize farming through educational programs and fairs. Laws passed by the territorial legislature in March 1901 and by the state legislature in 1909 required all county commissioners to conduct regular Farmers' Institutes. Tax money could provide premiums in county-wide competitions of experimental work in livestock breeding and domestic science (home economics). At the turn of the century the federal government became involved in adult and youth vocational education, and the U.S. Department of Agriculture's county agents encouraged county fairs. From 1907 statehood the agents worked with Oklahoma's Farmers' Institutes and rural boys' and girls' clubs, including 4-H, to prepare crop exhibits and livestock for county fairs and the state fair.

The 1914 Smith-Lever Act established the Cooperative Extension Service (the vocational-education arm of the U.S. Department of Agriculture) within each state's land-grant colleges, including Oklahoma Agricultural & Mechanical (now Oklahoma State University) and Colored Agricultural & Normal (now Langston University). The idea was to give agricultural research information directly to farmers and their families through interaction with county extension agents. By that time many agents already served as judges at fairs and livestock competitions. The 1917 Smith-Hughes Act provided funding for Extension Service personnel to work more closely with 4-H (and later, Future Farmers of America and Future Homemakers of America) clubs. As a result, fairs increased in importance as an educational tool for rural youth.

Until 1915 the operation of county fairs in Oklahoma had been impeded by the profit motive. Most fair associations collected entry fees from competitors and gate admission from fairgoers. Therefore, in poorer, less populated counties, farm families could not afford to participate, and those areas were underrepresented in the state fairs. In spring 1915 Rep. Paul Nesbitt of McAlester presented a bill to allow county commissions to operate "free fairs" and use tax money to pay the event's expenses. Approved in June, the Oklahoma Free Fair Law directed each county agent to hold a meeting, select two fair directors, and ask the commission to collect twenty-five cents on each thousand dollars of assessed property value. Each county could draw one hundred dollars of state money to send its winning exhibits to a state fair. Immediately, twenty-two counties announced fair dates for autumn 1915, and two years later forty-nine counties participated.

In a state that was racially segregated from 1907 until the 1950s, African Americans had to conduct their own fairs, somewhat within the pyramidal system. In 1915 oilman J. Coody Johnson motivated black businessmen to set up a Negro State Fair, held first at Muskogee, then at Boley and Wewoka, through 1920. In later years African American county demonstration agents organized all-black events such as the one held in Oklahoma County at Luther. The winners moved up into segregated competitions at the State Fair in Oklahoma City.

The 1915 law set up a pyramidal competition system. Township fairs winners competed at the county fair, and county fair winners competed at a state fair. Every one of the state's seventy-seven counties held from three to ten free township fairs and a county fair (in 1916 Oklahoma County held six), and most cities voted bonds to buy fairgrounds and provide buildings. In the mid-1920s as many as 350 fairs were held across the state at the three levels. In 1928 free fairs were held in fifty-two counties and paid-admission events in twenty-four. As the Great Depression hit Oklahoma in the 1930s, most township fairs were cancelled because counties lacked funds, but county and state fairs survived.

County fairs have remained the standard in Oklahoma. At most, no one pays to get in, but a fee may be charged for special events and shows. Winners of livestock competitions may advance to both the Tulsa and Oklahoma City state fairs, but non-livestock winners may advance to only one. Oklahoma's Free Fair Law was amended in 1937 and 1947 and again in 2000 and 2002, expanding the system's funding methods.

No matter the size of the sponsoring community, the typical twentieth-century fair has usually been made up of two kinds of activities. Educational offerings included livestock and crop exhibits and competitions; arts, crafts, and homemaking competitions; and youth and vocational activities. General entertainment included midways, rides, food, shows, and special events. All of those elements have been present in greater or lesser degree in the Oklahoma fair scene since the region was Indian Territory. While the fair's ostensible purpose remained educational, over the century fair boards gradually shifted toward making the event an entertainment venue. The first large-scale attraction at most fairs was horse racing, primarily harness racing. In the late 1910s and into the 1920s this was replaced by automobile racing. In the 1920s the amusements "midway," consisting of thrill rides, tent sideshows, games of chance, and food booths (the carnival) became universal. An opening parade and queen competition, as well as baby shows, sky divers, rodeos, horse shows, ice shows, music concerts, and so forth were added over the decades in order to appeal to varied interests and draw larger crowds.

In 2002 the legislature created an Oklahoma County Fair Enhancement Fund to support the county free fair system. Through it, the State Department of Agriculture, Food, and Forestry allocates money to county fair associations and authorities through a matching grant program. The funds are dedicated for construction, facility upgrades, and premiums.

The following (as per The Chicago Manual of Style, 17th edition) is the preferred citation for articles:
Dianna Everett, “Fairs,” The Encyclopedia of Oklahoma History and Culture, https://www.okhistory.org/publications/enc/entry.php?entry=FA025.