Details of the Red River Wreck

Archaeological study of the Red River Wreck since 1999 has resulted in excellent preliminary information on the wreck site and the ship itself. Study in 1999 led to the recognition of the machinery visible above the waters of the Red River as being from a single engine steamboat. The single engine was connected to a pair of centrally placed flywheels that were attached to heavy iron drive axles that powered the side-paddle wheels. The fact that this is a single engine steam boat is significant, because the single engine boat was replaced almost overnight by vessels powered by two steam engines. 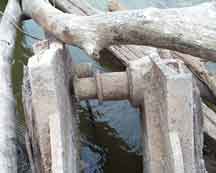 Left: Connecting pin that once linked the flywheels. Shearing of this pin, probably when a paddle wheel lodged on a sandbar or snag, may have been what caused this boat to stop dead in the water and eventually sink.
Right: Starboard flywheel/drive axle. The bearing block that once held the axle to the flywheel box was unbolted and removed, along with other parts, probably as part of early salvage efforts.

Prior to the fall of 2002, study focused on the stern of the wreck, because this is the portion exposed above the floor of the river. In the fall of 2002, a combined crew from the Oklahoma Historical Society and Texas A&M University conducted a survey and solid core probing of that portion of the wreck lying upstream from the drive machinery with the goal of documenting the location and condition of the bow. 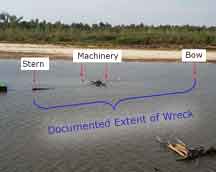 This survey work proved successful in outlining the forward portion of the wreck, identifying the location of the bow, and in determining that the ship upstream from the drive machinery appears to be relatively intact. At the bow, there is approximately six feet of river sediment over the wreck.

Identifying the bow of this ship has allowed Kevin Crisman of Texas A&M University to estimate its length to be about 140 feet. From examination of exposed portions of the stern section of the wreck, Crisman has estimated the ship’s beam to be twenty-six feet (the width of the hull, blue in the above illustration), the dimension from guard to guard (the width of the main deck, highlighted in red above) to be forty-two feet, and the depth of hold (the distance between the keelson and the bottom of the main deck) to be six feet.

Identifying the bow has also allowed Crisman to prepare the following plan that shows the relationship of the exposed wreck to the entire vessel.

Archaeological investigations in 2001 resulted in the construction of measured drawings of much of the wreck that was then exposed above the floor of the river, that is summarized in the above diagram. This was accomplished in zero visibility water with an active and at times stiff current. Teams of divers obtained measurements of small areas of the wreck, that were turned into measured drawings of these areas. These were combined into an overall site plan by Andy Hall. An excellent example of these drawings is that of the hub of of the port paddle wheel shown below. 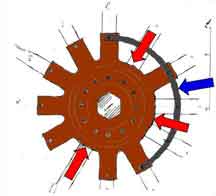 This drawing shows the cast iron hub of the port paddle wheel, into which oak arms of the paddle wheel are fastened. The red arrows point to flanges of the paddle wheel that are broken off, probably resulting from extreme torque when the paddle wheel struck a snag or sandbar. The blue arrow points to a metal strap added to the hub as part of a repair. Several serious damage events are probably represented by this evidence, suggesting this ship had been in service for some time prior to its sinking.

Analysis of wood samples collected in 2002, and analyzed by Dr. Roy Whitmore, show the ship to have been constructed almost entirely of white oak (keelson, frames, clamps, outside plank, transom, bilge stringer, flywheel box, deck beam, sternpost) with the deck planking being of white pine.