Major archaeological documentation was undertaken by the OHS during a three week project in July and August of 2001 under the overall direction of Dr. William Lees. Project archaeologists were Dr. Corbin and Dr. Sheli Smith. Work was undertaken by a crew of volunteers and students obtaining credit through Indiana University. 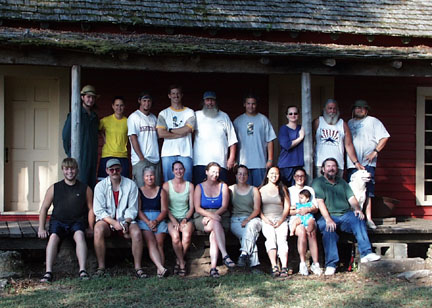 
The focus of the 2001 work was recording that portion of the wreck exposed above the river floor. Substantial progress was made on this goal, and an overall site plan and one cross vessel profile was prepared by project draftsman Andy Hall. In addition, a few artifacts were recovered from the wreck, including a wooden barrel containing what is probably salt pork packed in lard.

Limited field work was undertaken on the wreck during 2002. A week was spent on site in September to conduct remote sensing, discussed below, and to allow new project archaeologist Kevin Crisman of the Texas A&M University (TAMU) to become familiar with the site. In October the OHS-TAMU team visited the site again to conduct probing of the wreck to delimit its extents and to conduct additional recording of threatened elements of the vessel. The work to delimit the wreck was particularly important, and is discussed in the section on Shipwreck Details. In addition, geological field work was conducted in the vicinity of the wreck during 2002, and is discussed below.

Side-scan sonar imaging of the wreck and adjacent river floor was undertaken in October of 2002 by Brett Pheneuf from the Texas A&M University. An area of approximately 50 by 150 m was surveyed centered on the wreck. Excellent images of the wreck were obtained which clearly show the portion exposed above the river floor, including the approximately forty-foot-long flywheel/engine box. 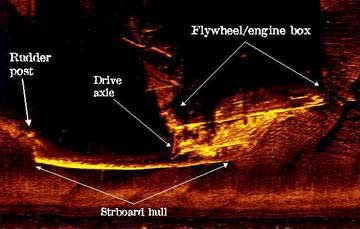 The river upstream and downstream of the known wreck site was surveyed in order to search for missing portions of the wreck such as the boiler and starboard paddle wheel. A number of snags were documented beyond the wreck site, but no evidence for cultural debris was seen other than the wreck itself.

During the spring and summer of 2002, the Materials Division, Soils and Foundation Branch of the Oklahoma Department of Transportation (ODOT) conducted geologic investigations of the river valley at the wreck site. The goal of this work was to provide the geological information necessary to design an engineering solution(s) to various challenges facing the excavation and recovery of the wreck. Primary among these is the nature of the sediment in which the wreck is embedded. This sediment is extremely loose and will not hold a side wall, making excavation without some sort of retention device impossible. Secondary issues of current and visibility may also be addressed with the construction of a retention device.

The cross section above is the result of the ODOT geologic work at the wreck site. Among other things, this diagram indicates that there is approximately ten to twelve feet of sediment below the flow line (floor) of the river and above the bedrock (Washita limestone). It is possible that the wreck, especially at the bow where there is some 6 ft of sediment over the deck, is resting on the bedrock.