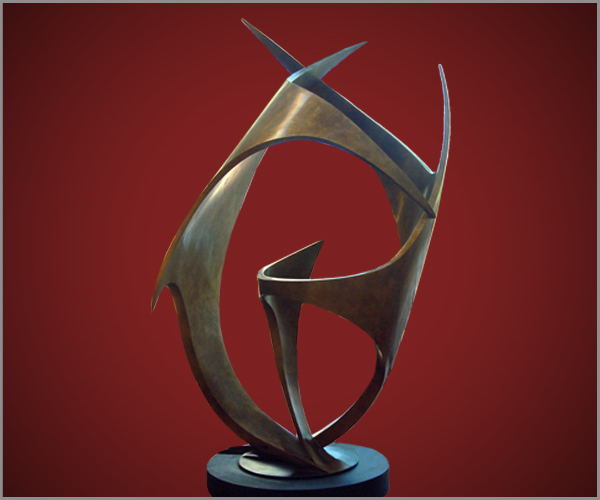 
Spirit of the Wind

Many of Houser's pieces are cast bronzes, a process that involves molten metal poured from molds. One of the interesting things about this piece is that it is not cast bronze, but rather a fabricated bronze sculpture that is welded and assembled from thin bronze plate about one-eighth-inch thick. This sculpture, constructed in collaboration with craftsman and welder Ryan Rich, captures the formless nature of wind, while giving it a twisting form suggestive of tornadoes and high winds in Oklahoma and on the plains. The individual sections of the overall sculpture are cut from patterns. The patterns are then saved as additions are made, and the individual sections of them are cut from the patterns and then welded together and assembled into the final piece. Houser saw this fabrication method as a way to create large monumental pieces. Loan courtesy of the Allan Houser Foundation 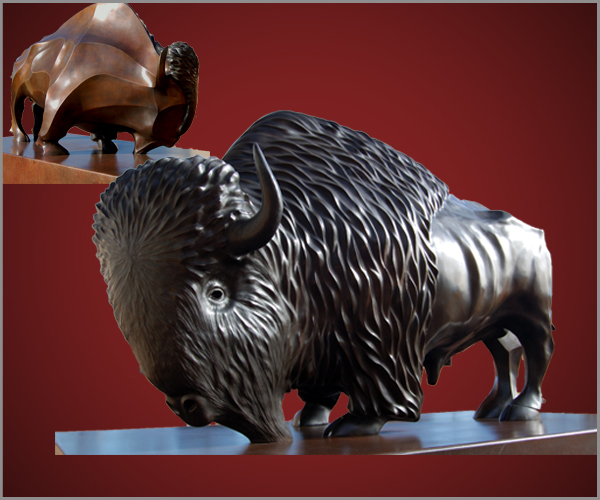 This bronze piece fuses two viewpoints, abstract and realism, according to the artist, Phillip Haozous. Inspired by an earlier stone carving created by the artist, he learned that stone sometimes has a mind of its own, and when it broke in half, rather than bemoan the loss, he was astounded by the great beauty that the stone held inside. Once split apart, one side realism and the other, a stylized abstract form, an idea took root. Phillip created his interpretation of a buffalo, not an exact replica, rather what he saw through his eyes. The result is this wonderful bronze, part realist and part abstract. “It shows the power of the buffalo in an unreal look.” – Phillip Haozous 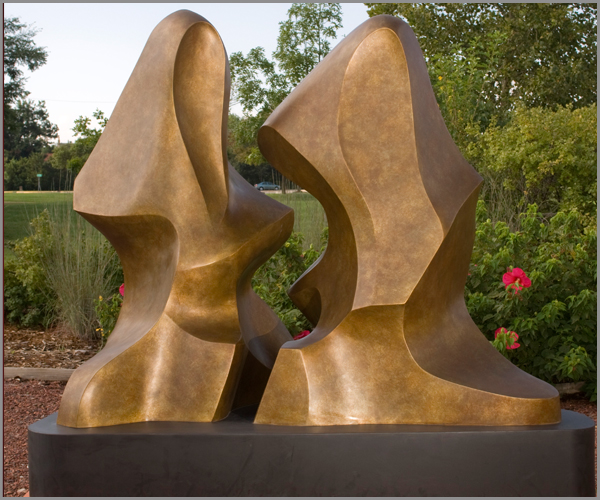 The artist created this piece after he took a trip to Peru to visit the ancient site of Machu Picchu. He was fascinated by the architectural design of the temples at Machu Picchu, particularly how the stones were cut and fit to withstand the impact of an earthquake. Constructed to bend but not break, the structure still stands today. Inspired by the power and beauty of the stone, Phillip set out to create a piece that captured his feelings and spiritual awareness. This monumental bronze, Spirit of Machu Picchu III, is the result. It depicts two girls on the front side, one leaning toward the other as they discuss the age-old dilemma of boys. 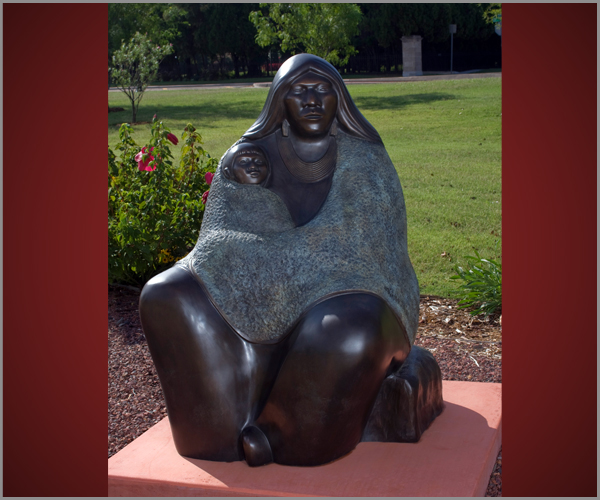 A major theme in much of Allan Houser’s work is the recurring image of mother and child. The maternal aspects of culture in humanity were one of the quintessential themes expressed in his sculpture. This sculpture was originally created in Tennessee marble and later cast in bronze. Notice the expressions on the faces of the mother holding her child, as well as the interplays with texture, particularly the blanket that is wrapped around them both, a comforting image indeed. Mrs. Anna Marie Houser, widow of Allan Houser, has often stated that she believes the child is Allan and he is being held by his mother, Blossom Haozous. 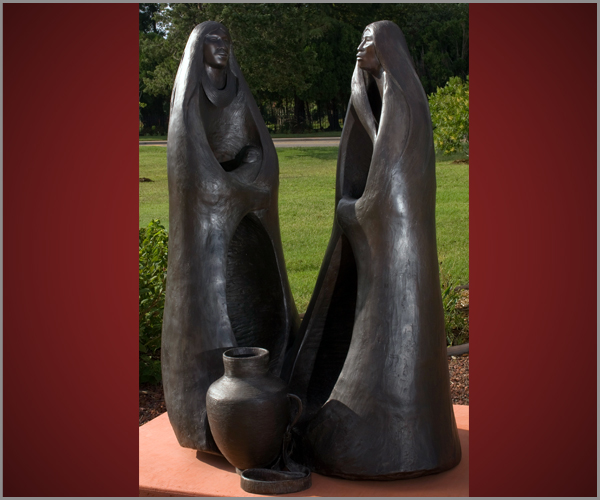 Meeting on the Trail

Allan’s portrayal of female figures merges narrative tradition with modern aesthetics of sculpting. Time and again, as reflected in his sketchbooks, Allan acknowledged the special relationship between women and their powerful ability to bring forth life and represent the continuation of culture and life. In this piece, two women have met on the trail. The woman on the left holds her sleeping child while visiting with the other woman on her way to get water. Water is one of the basic necessities of life, and is oftentimes associated with healing. These two women seem to be catching up on the day’s activities. 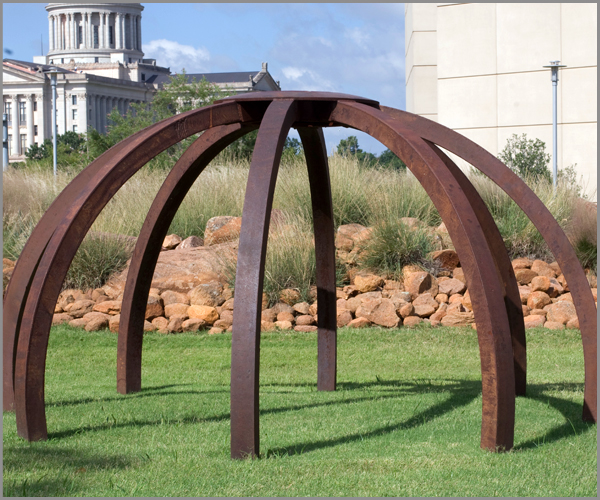 A lodge can take on many forms: a house, a church, a place where families come together, or maybe it is where a person goes for a ceremony. The metaphor of a lodge and sense of place is illustrated in this small steel lodge created by Bob Haozous. According to Bob Haozous, “a lodge is a place where individuals come together and become culturally aware of their responsibilities again.” The lodge itself can be a semi-permanent structure, depending on the materials used for its construction, but the philosophical concept of a lodge, not only as a physical structure but also as a mental or spiritual place, promotes a deeper understanding of indigenous thought. 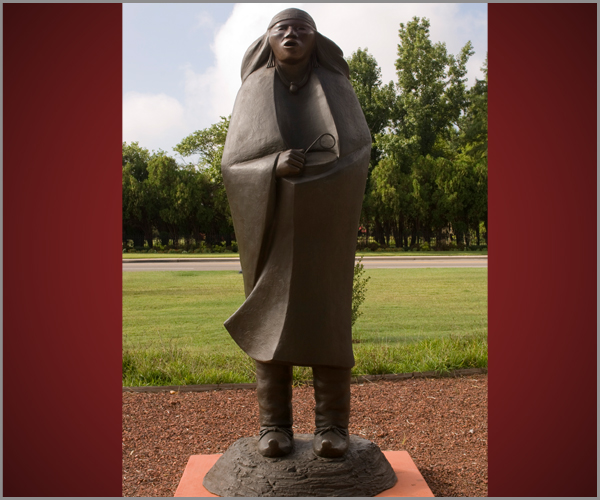 This piece was one of Allan Houser’s largest monumental bronzes, depicting an Apache man singing his prayer song as he waits for the morning sun to rise. The spirituality of Indian culture was not lost on Allan Houser, raised by his parents, Sam and Blossom Haozous, Warm Springs Chiricahua Apache. He portrays this spirituality and reverence in much of his work. This particular piece shows an individual man singing his prayer song, a personal relationship with the Creator, but illustrative of the tribe this man belongs to and their philosophical foundations. 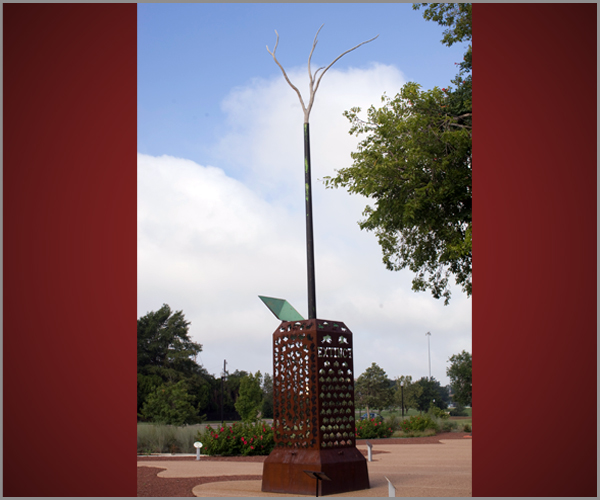 Much of Bob’s art deals with the contradictions of modern convenience and responsibility. Extinct is a four-sided steel structure with cutouts in the shape of buffalo. Emerging from the center of this structure is a single green tree, a contradiction. This piece refers to the decimation of the buffalo in the late nineteenth century, which played such a pivotal role for many American Indian tribes. According to Bob, the destruction of the buffalo can be equated to killing nature. What about the future of the earth and the coming generations? We, as a modern society, accept convenience at the cost of destroying the earth. 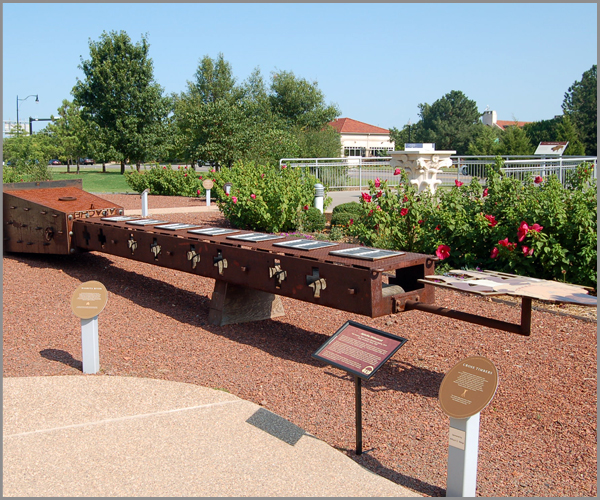 Bob Haozous says that this piece has his heart. His artwork often evokes an emotional response from the viewer. Whatever the response, he hopes to generate dialogue. As an artist, he refuses to accept boundaries or restrictions. This piece is illustrative of his tribal history, and in a broader sense, American history.

The base is constructed of steel and contains the names of the Apache children that were sent away to government boarding schools in the late nineteenth century. Forcibly removed from their families and homes, many of the children died. There are names of contemporary families also—a contradiction and a realization that what once was no longer exists. Behind the seven jail windows on the upper portion of this piece are the skulls of seven elders and seven children. On top of this column is a Chiricahua Apache man, shackled in preparation for his impending execution.

This piece is lying on its side because we do not know who we are now. We have lost our way, and we must find it through self-awareness and becoming responsible to nature. Inside of this piece contains the “powerful symbol of Apache spirituality.” 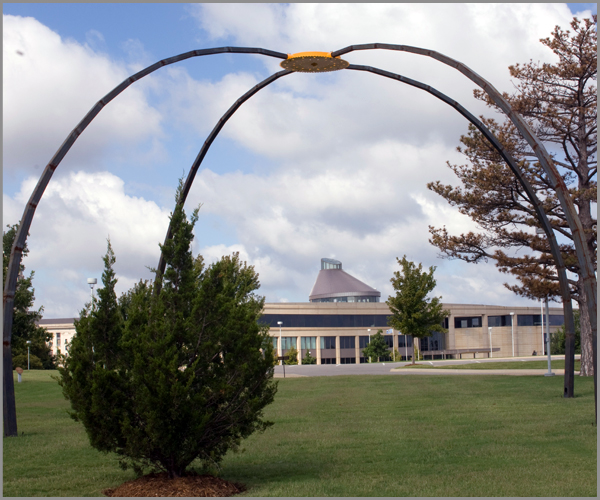 This large version of a lodge was created for an exhibit on Bob Haozous at the American Indian Arts Museum in Santa Fe, New Mexico, in 2005. This monumental lodge has an aura that brings people in and embraces them. The lodge is important to the artist because he wants his family and tribe to understand that being Apache is far more profound than blood or numbers. What makes them Apache is that relationship to nature. It is about responsibility and getting back to an indigenous dialogue. 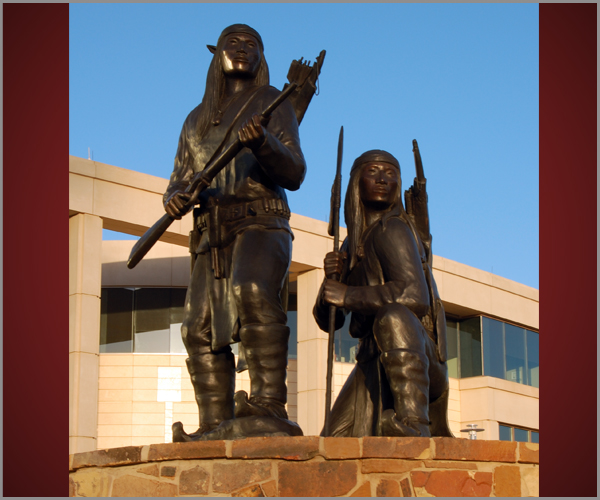 “Two men, fast men, quick men rather fight and not be afraid at all.” - Sam Haozous, Fort Sill Apache Tribe. This quote refers to Geronimo’s highly effective strategy of sending warriors two at a time to engage the enemy. It is from a 1956 oral interview.

Sam Haozous, Allan Houser’s father and grandson of renowned Warm Springs Apache Chief Mangas Coloradas, was among those who surrendered to the US government in 1886 and eventually were sent to Fort Sill, Indian Territory. Now known as the Fort Sill Apache Tribe, they were freed in 1913 after being held prisoners of war for twenty-seven years. The following year, Sam’s wife, Blossom, gave birth to their son Allan.

Geronimo employed a style of fighting against American and Mexican armies that was calculated and shrewd. Knowing that the Apache were frequently outnumbered, Geronimo’s warriors often fought in small groups as pairs. They would quickly engage the enemy and then retreat to the rocky cliffs of southern Arizona and northern Mexico.

Sam Haozous described several instances where two Apache men would lay traps for enemies by hiding under grass or blankets and ambush a small patrol of soldiers. Another account tells of two warriors who got the attention of a detachment of cavalry and led them into a canyon where a large group of Apache was waiting.