Allan Houser inherited the cultural traditions of his family, his tribe, and his community in Oklahoma. For the rest of his life, he would continue to absorb the world around him, whether it was the landscape of the desert Southwest or the beauty of a mother and child. Allan’s ability to give those visions form and emotion would evolve along a parallel path of the journey.

For more than thirty years, Allan’s powers of creative expression grew within the world of Indian art schools, initially as a student and eventually as a teacher and mentor to an entire generation of American Indian sculptors. At various stages of this journey, he mastered drawing, painting, stone carving, and sculpting in bronze. He also changed his name to Houser, easier to spell and pronounce in the larger world in front of him.

In 1975 Allan retired from teaching and turned to sculpting full time. At first, he worked in a Santa Fe studio side by side with his son, Bob. Then he worked with son Phillip to create the Allan Houser compound on a serene patch of desert landscape southwest of Santa Fe. There, for the rest of his life, he created an amazing variety of sculptural art unmatched for range of style and sheer force of emotion. His last monumental bronze, Unconquered, was returned to his native state where it stands watch in front of the Oklahoma History Center. 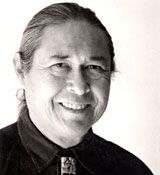 Phillip Mangas Haozous, named for his great-great-grandfather and leader of the Warm Springs Chiricahua Apache Mangas Coloradas, was born in Lawton, Oklahoma, in 1941 to Allan and Anna Houser. Phillip’s initial forays into the art world began with jewelry making for his costumes during his time as an actor in a Wild West Show in Cripple Creek, Colorado. In 1973 Phillip enrolled in the Institute of American Indian Arts (IAIA) in Santa Fe, New Mexico, to refine his techniques under the tutelage of Skip Holbrook. While studying at IAIA, Phillip was named the most outstanding jewelry student in his class. In addition to working with jewelry, Phillip began to explore other media, including flute making and sculpting.

Allan Houser, master sculptor, inspired his son Phillip to utilize his special gift for sculpting. According to Phillip, “Allan was very patient with me and was always there to offer words of encouragement when I was having difficulty with a particular stone.”

Phillip is known for sculpting abstract figures. His awards include several first place ribbons at the Santa Fe Indian Market, the Eight Northern Indian Pueblo Artists and Craftsmen Show, and the Otero Award for Creative Excellence. Fusing the abstract with concepts of realism, Phillip Haozous’s artwork evokes emotion and hearkens back to the traditions of the Native culture. 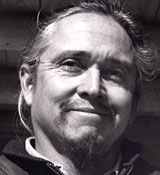 Bob Haozous was born in 1943, the fourth son of Allan and Anna Marie Houser. Bob finished high school in Utah and joined the US Navy. After serving in Vietnam as a machinist’s mate, he enrolled at the California College of Arts and Crafts. In 1971 back in Santa Fe, Bob built a home and art studio where he started expressing himself in sketches, paintings, jewelry, wood, and stone. He found his creative stride when he started working in steel, a bold, uncompromising medium that matched the emphatic messages of his work.