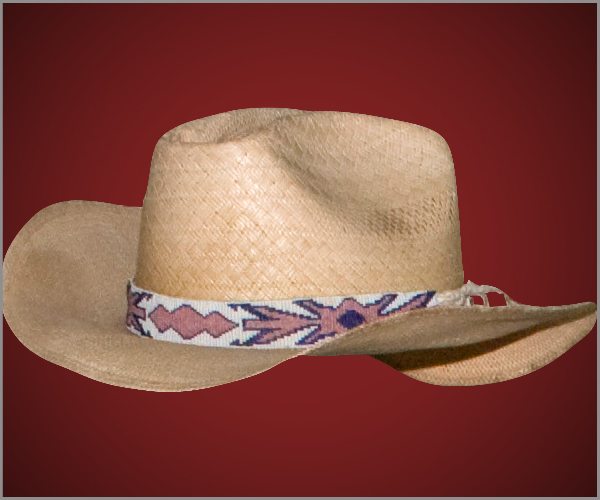 Allan wore this straw cowboy hat with the beaded hat band most of the time when he was working. He used to change between this cowboy hat and his beret on a daily basis, wearing one or the other on any given day. Loan courtesy of Mrs. Anna Marie Houser

According to his family, Allan wore his beret when his photograph was being taken and his cowboy hat when he was working. Loan courtesy of Mrs. Anna Marie Houser 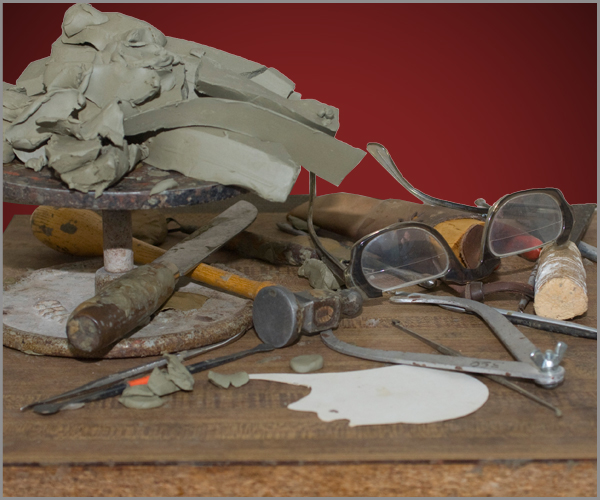 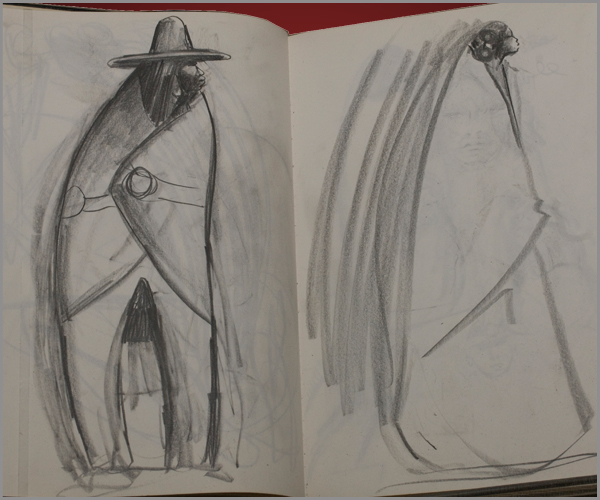 Allan Houser was always sketching, whether it was in these sketchbooks or on a napkin or piece of paper he happened to have handy. Mrs. Houser recalls driving down the road with the family and all of a sudden Allan would say, “take the wheel,” and he would start sketching. He was always creating. During his lifetime, Allan drew thousands of sketches. Loan courtesy of the Allan Houser Foundation 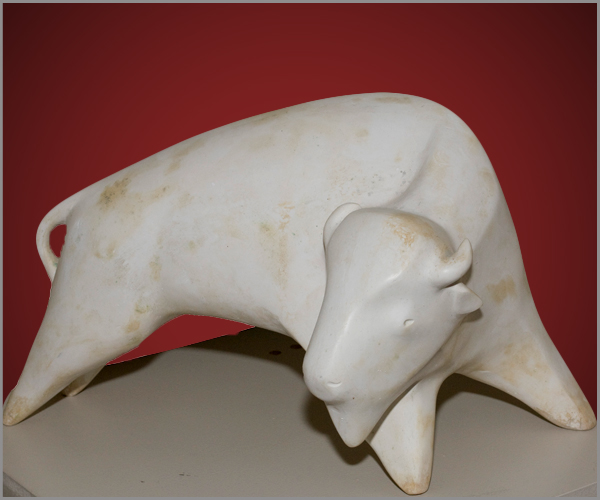 Sculpting plaster provided Houser with new avenues and opportunities not found in stone, bronze, or wood. For many American Indians, the bison is a sacred symbol of lost power and freedom. To Houser, the bison was a symbol of fluid motion and strength. Loan courtesy of the Allan Houser Foundation 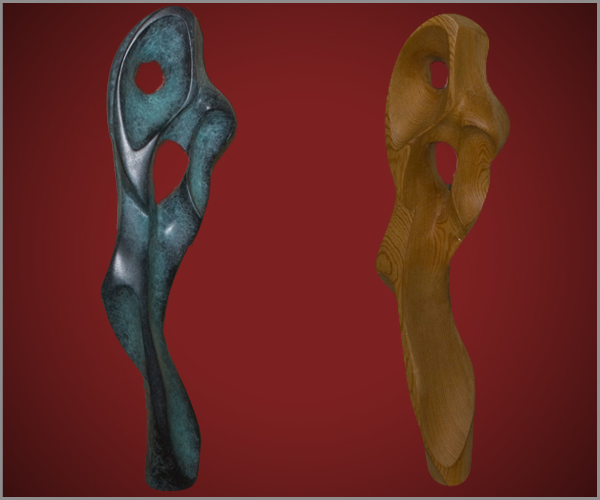 Allan Houser usually started his sculptures with drawings. This piece is different in that it started with a block of pine that he began to carve. He let the wood speak for itself with the end result being a fluid abstract form that follows the grain of the wood. Loan courtesy of the Allan Houser Foundation 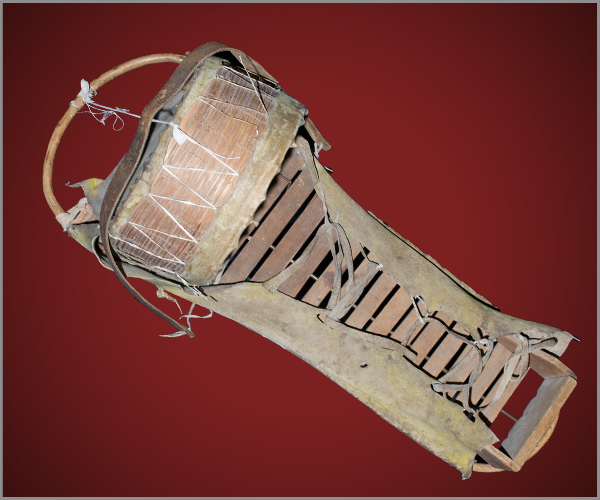 This particular cradleboard is a Haozous family heirloom. Most likely made by Blossom White Haozous, mother of Allan, and used by his siblings. Allan was one of five children, born to Sam and Blossom Haozous and raised at the family farm in Apache, Oklahoma. This cradleboard is made in the style typical of Apache cradleboards consisting of a wooden frame and curved bow at the head of the cradleboard Buckskin is wrapped around the frame and makes the body of the cradle. The infant is securely laced inside the cradle with a wooden footrest at the base of the cradle. Loan courtesy of the Allan Houser Foundation 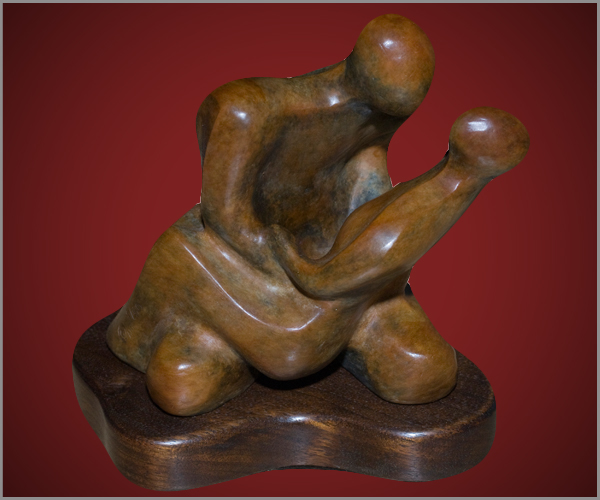 “This sculptural piece is the result of my initial venture into clay as a medium. My goal for this particular piece was to capture the passion and power of two people in love. The name Athanacious is a Greek word meaning eternal.” - Phillip M. Haozous. Loan courtesy of Phillip M. Haozous 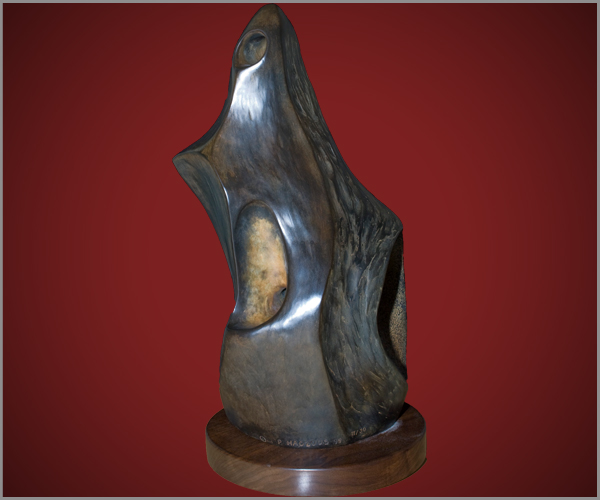 “As an artist, I knew that I wanted to explore working with larger and more monumental images than I had worked with in the past. This particular piece is part of that process of exploration.” - Phillip M. Haozous. Loan courtesy of Phillip M. Haozous 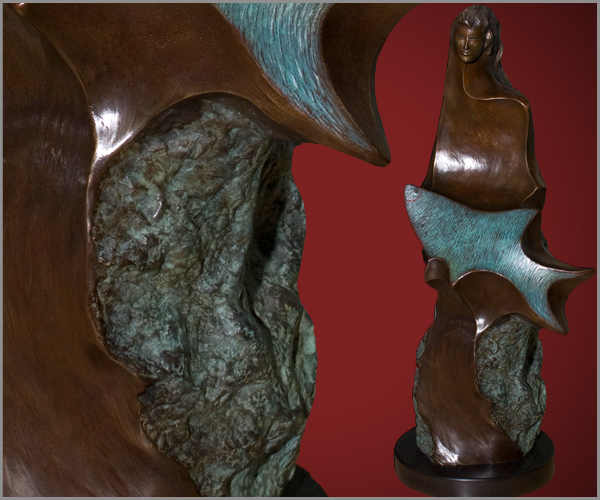 “The predecessor to this piece was carved from a meteorite that had fallen to earth in Argentina. The title of the sculpture is inspired, of course, by that heavenly descent.” - Phillip M. Haozous. Loan courtesy of Phillip M. Haozous 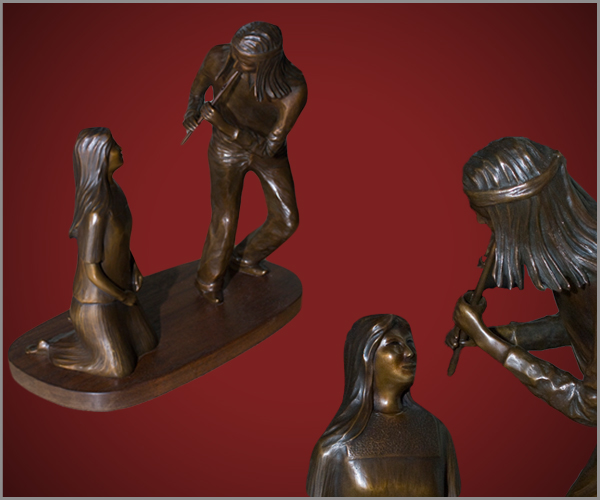 “In Apache culture, flute music was an essential part of courtship, an expression of affection. The ardor felt by this young warrior for his maiden is evident as he offers her a love song.” - Phillip M. Haozous. Loan courtesy of Phillip M. Haozous 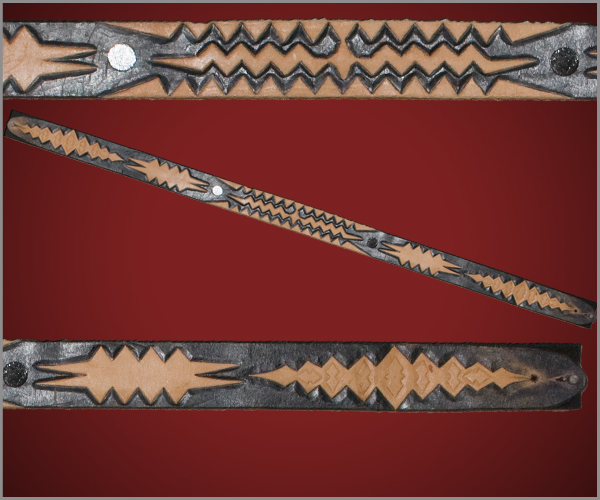 Roy Houser is the second oldest son of Allan and Anna Marie Houser. This guitar strap, made and carved from leather, was crafted by Roy. His younger brother Phillip recalls fond memories of growing up with Roy and his free spirit. Loan courtesy of the Allan Houser Foundation 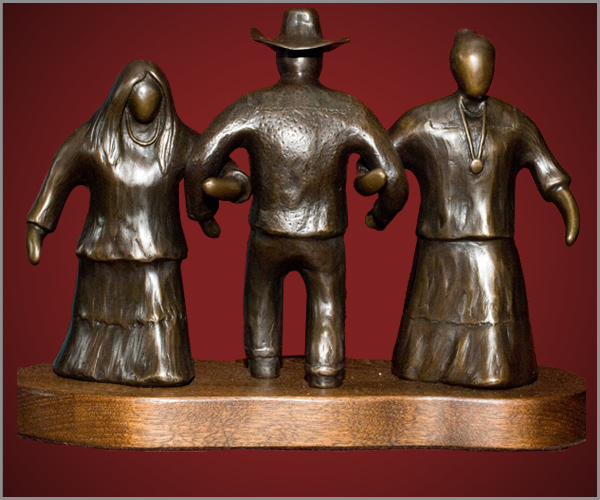 Back and Forth Dance with Allan Houser

“I used to do the back and forth dances there all night till daybreak.” - Allan Houser

In this sculpture, Phillip Haozous depicted his father, Allan, dancing with his cousin, Mildred Imach Cleghorn, and his sister, Patricia Haozous Regan. Phillip has memories of his father dancing at their tribal gatherings growing up. Loan courtesy of Phillip M. Haozous 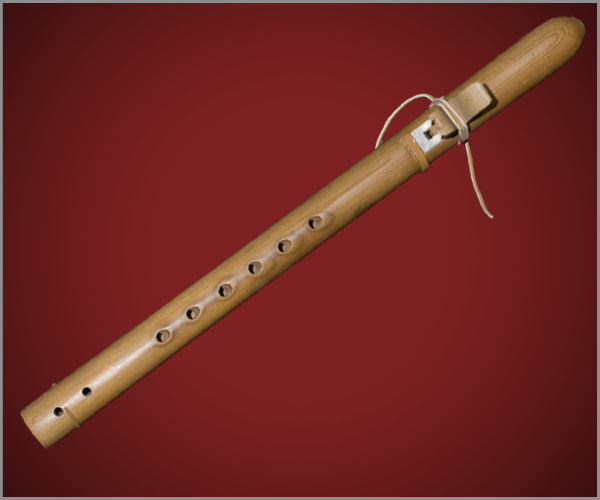 This particular flute was Allan Houser’s favorite flute to play. Although Allan didn’t make flutes, he did play them. The flutes in his personal collection were usually gifts or made by his son, Phillip Haozous. Loan courtesy of the Allan Houser Foundation 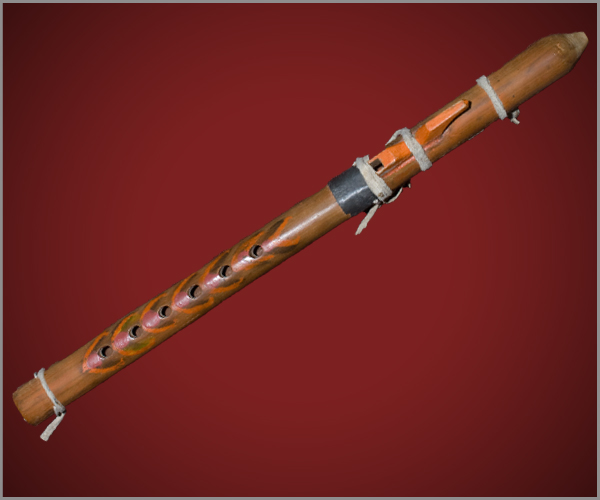 Allan Houser’s parents, Sam and Blossom Haozous, made many Apache material culture items throughout their lifetime, including flutes, cradleboards, buckskin bags, and bows, to name a few. This flute was one of the family heirlooms that belonged to Allan’s personal collection. Loan courtesy of the Allan Houser Foundation

“I went to the Indian powwows around Apache, and danced with the Plains youngsters.” – Allan Houser.
In this piece, Houser depicted five Indian men that he created from his mind’s eye and his memories of southwest Oklahoma and the different tribes around Apache, Oklahoma. Houser recalled later that a person looked at this sculpture and said,“I know every one of those men.” Loan courtesy of the Allan Houser Foundation

Beaded Apache bag, made of brain-tanned hide, adorned with Apache beadwork designs on both sides of the bag, with long single strands of assorted bead colors hung from the base of the bag. Amy White Imach, sister of Blossom White Haozous, and aunt to Allan Houser, made this particular bag. OHS Collection 01497 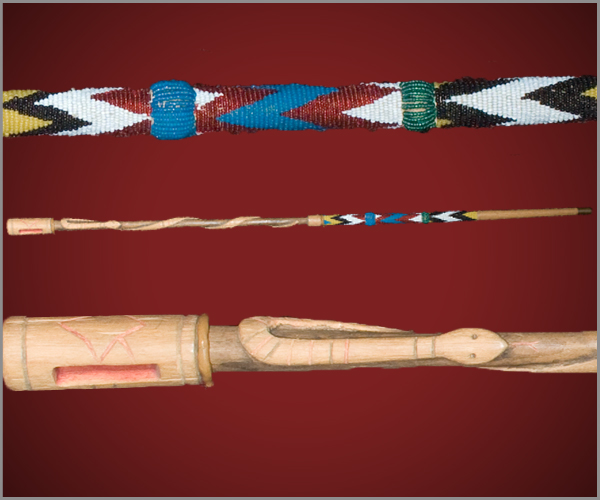 This wooden cane is adorned with Apache beadwork designs along the lower half. The middle and upper portion is adorned with a snake motif, wrapped around the cane. This piece is labeled “Geronimo’s cane.” Geronimo led the resistance against the US Army in the taking of ancestral Apache lands. Facing starvation, Geronimo and his people eventually surrendered. They remained prisoners of war for twenty-seven years. The Apache prisoners disease, starvation, and unsanitary living conditions. To earn income for their families, they made Apache material cultural items and sold them to tourists. Geronimo had earned quite a reputation in the Anglo press, so Apache people would use his name to sell their wares. This cane was likely not made by Geronimo. OHS Collection 03892 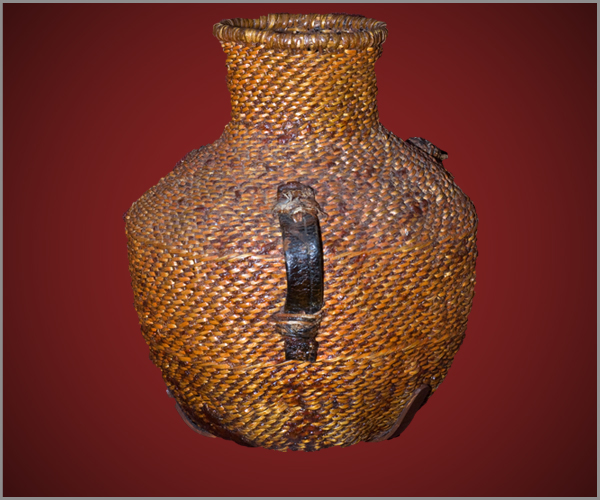 Water is an essential resource needed by all creatures. Apache people historically lived in a harsh, arid, desert environment, ranging between mountains and plains. The jug itself is woven from willow and tightly coiled. Pitch, a waterproofing agent, was then warmed and applied to both the inside and outside of the water jug. Thus, you have a waterproof container, which was ideal, especially in a desert environment where water is scarce. Women usually made these water jugs, along with the rest of the material culture items. Allan Houser depicted women with these water jugs in his bronze work. OHS Collection 1984.059.003 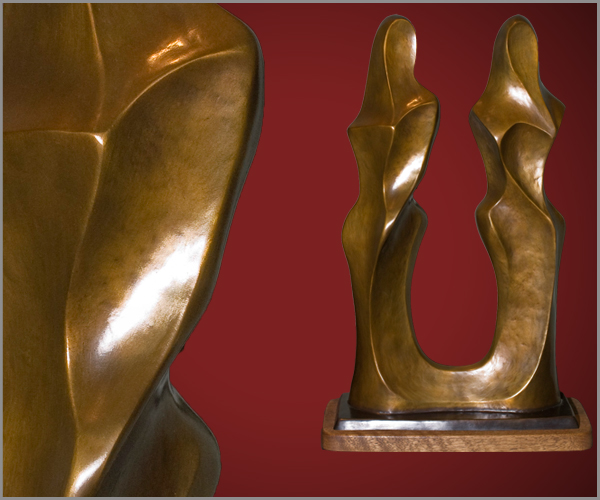 This sculpture was an experiment with two similar forms and how they directly relate to each other. This piece was the third in a series leading to the creation of the monumental Sisters III. 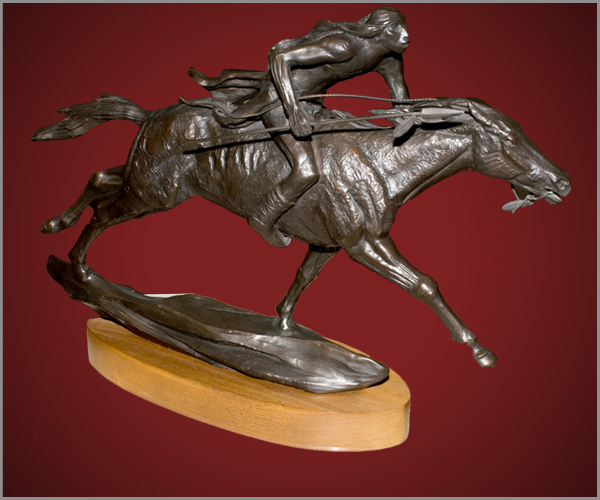 “I’ve heard stories about my grandfather, who was killed in a battle. I’ve been told that on that occasion, the Apaches were ambushed by Mexican soldiers. Several braves volunteered to give up their lives, to fight until death to hold off the Mexicans so that the rest of the band could escape...my grandfather was one of the heroes.” - Allan Houser. Loan courtesy of the Allan Houser Foundation 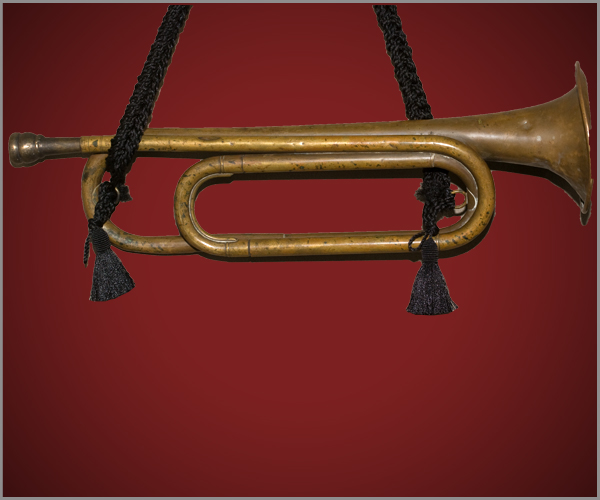 Bugle used by Sam Haozous, father of Allan Houser. In the last part of the nineteenth century, the US Army developed an experimental military force composed of all-Indian units; specifically, Troop L Cavalry and Company I of the infantry. During the Apaches’ imprisonment in Florida and Mount Vernon Barracks, Alabama, Sam Haozous, along with other Apache prisoners of war, were recruited into Company I, Army Infantry regiment. Loan courtesy Allan Houser Foundation 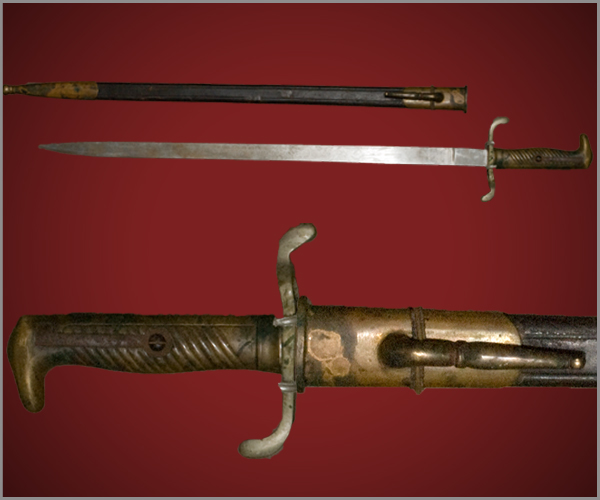 This saber belonged to Sam Haozous, father of Allan Houser. In 1894 when the Apache prisoners of war were relocated to Fort Sill, Oklahoma Territory, they were transferred to Troop L of the 7th US Cavalry, composed of Kiowa, Comanche, Cheyenne, and Arapaho individuals. Although the Apache soldiers were prisoners of war, they performed all of the duties and functions of US Army soldiers: carrying weapons, escorting payroll, etc. The US Army deactivated the all-Indian units, including Troop L at Fort Sill, in June 1897 and the troops were discharged. Loan courtesy of the Allan Houser Foundation 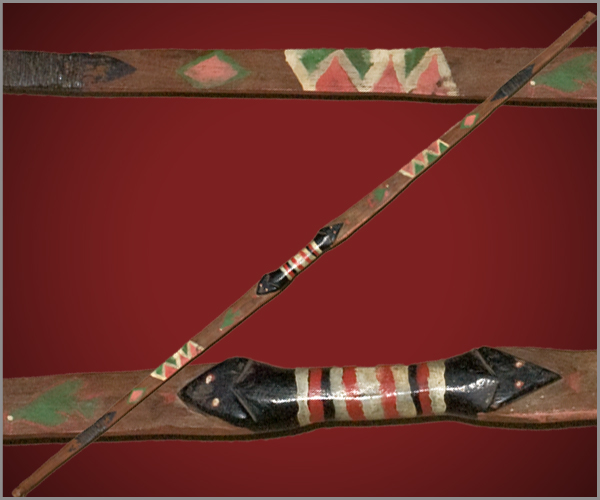 This wooden bow was made and painted by Sam Haozous, father of Allan Houser. Allan remembered his father giving him direction on details of his paintings and drawings depicting Apache, particularly the design on a saddle bag or the how the moccasins looked and the everyday dress of Apache men and women. Loan courtesy of the Allan Houser Foundation