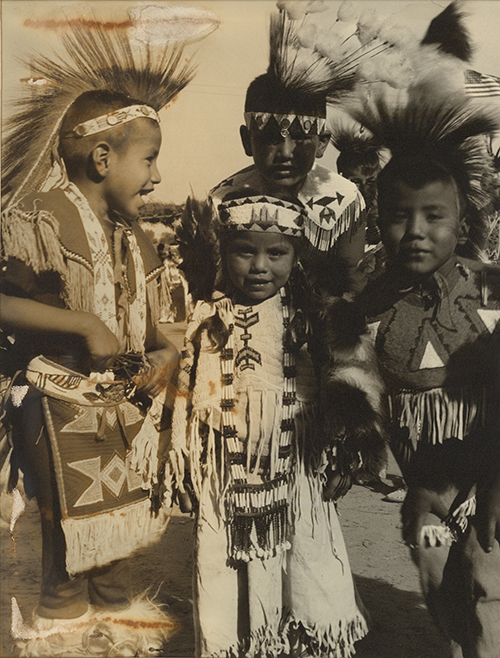 Held annually in August, in Anadarko, Caddo County, the American Indian Exposition is a ceremonial and cultural event that has drawn participants and tourists from across the United States and around the world. The Anadarko exposition was the successor to the Craterville Park Indian Fair, which had been held from 1924 through 1933 near Cache, Oklahoma. Promoted by Frank Rush, retired manager of the Wichita National Forest and Game Preserve, that short-lived event had featured crafts, horse racing, archery, and dancing as well as reenactments of Indian attacks on white settlers.

On September 11, 1932, at the conclusion of that year's Caddo County Free Fair, Lewis Ware, Jasper Saunkeah, Bill Williams, Robert Goombi, Maurice Bedoka, Otto Wells, Edgar Halfmoon, Dennis Warden, Elija Reynolds, Julia Mahseet, Sarah Grimes, Joe Weryavah, and Parker McKenzie met to critique the demonstration of Indian dancing. They planned to repeat the performance on an annual basis, to capture the dances on film, to make recordings of Indian languages, and to preserve their heritage. Calling themselves the South Western Indian Fair (SWIF), they discussed their dissatisfaction with the Craterville fair. They viewed its presentation of American Indians as white-oriented and ethnocentric, and they wanted more autonomy than Rush had given the "figurehead" Indians at Craterville. The group also discussed the possibility that Fort Sill expansion plans could possibly encompass Craterville Park where the all-Indian fair had been staged since 1924.

The Caddo County Free Fair Board proved willing to grant them creative and management freedom and to provide a small stipend. After drawing large, enthusiastic crowds to their September 13–16, 1933, county fair dance performances, SWIF leaders decided to separate from the county fair. Anadarko, seat of Caddo County, had hosted the Oklahoma Indian baseball tournament in July 1933, and when SWIF members canvassed Anadarko businessmen, they received strong support for a three-day Indian Fair in August, between the baseball tournament and the county fair.

Recollections of the founding sometimes mention that a rival group of organizers attempted to launch a similar enterprise at the same time. It seems that this group approached the state legislature in 1935, seeking official recognition for The American Indian Exposition. Whatever their differences, they resolved them privately, and by 1936 the SWIF officers were in place as the American Indian Exposition leadership. The gathering featured arts, crafts, agricultural exhibits, horse racing, greyhound racing, archery competitions, dancing, and from 1935 to 1939 a queen competition. In 1940 the exposition dropped the queen contest in favor of honoring the "princesses" of each participating tribe.

Another significant change occurred in 1938 when the exposition sponsored a pageant, The Spirit of the Washita, a historical play written by Margaret Pearson Speelman. It was so well received that she wrote The Spirit of the Red Man for the 1939 exposition. The pageant became the centerpiece of succeeding expositions, necessitating longer scripts and casts of characters to accommodate everyone who wanted to be included. By the mid-1980s the pageant had become extravagant and out of focus. Finding directors to deal with the large production became difficult, forcing the event to be offered on an irregular basis.

The mainstay of the American Indian Exposition has remained the dancing. There are several varieties of dance in both the group and individual categories. The war dance competition serves as the premier event. During World War II war dancing became prominent, emphasizing the Indian commitment to supporting the national challenge against the Axis powers. Significantly, the postwar exposition influenced the growth in Indian powwows during the 1970s and 1980s.

The following (as per The Chicago Manual of Style, 17th edition) is the preferred citation for articles:
Thomas L. Hedglen, “American Indian Exposition,” The Encyclopedia of Oklahoma History and Culture, https://www.okhistory.org/publications/enc/entry.php?entry=AM005.