The Oklahoma began its service during World War I escorting supply and troop ships across the Atlantic Ocean. German submarines, called U-boats, were threatening to sink any ship they could find, so the Oklahoma protected them as they sailed back and forth from Europe and America. The Oklahoma even escorted President Woodrow Wilson as he traveled to Europe to negotiate the Treaty of Paris to end the war.

After World War I, the Oklahoma traveled the world providing help to those in need. In 1925 the Oklahoma and ten other battleships, along with their destroyer escorts and support ships, traveled around the Pacific Ocean. They sailed all over the Pacific, including places like Samoa, Australia, and New Zealand. The sailors on board the Oklahoma enjoyed the trip and even had a special celebration to mark their crossing of the Equator. When Long Beach, California, experienced a disastrous earthquake in 1933, the commander of the Oklahoma sent sailors ashore to help police and firefighters. They helped to keep the peace so that the firefighters could do their job. In 1936, the Oklahoma traveled to Spain to help evacuate American and European refugees. A refugee is someone who is forced out of his or her home because of a natural disaster or war. That year was the start of the Spanish Civil War, so many American, British, and French citizens needed to escape the fighting. One woman who left Spain on the Oklahoma delivered a baby while traveling home. It was the first baby ever born on an American battleship. 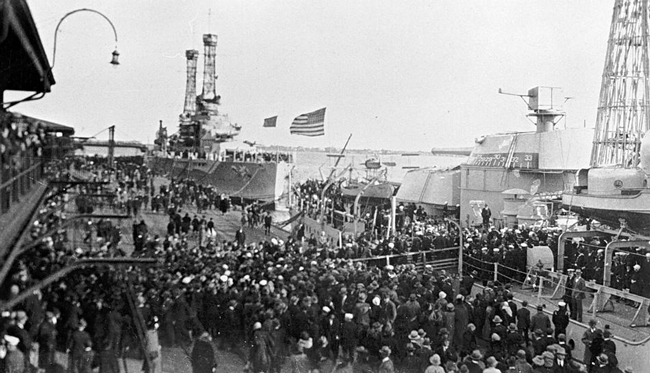 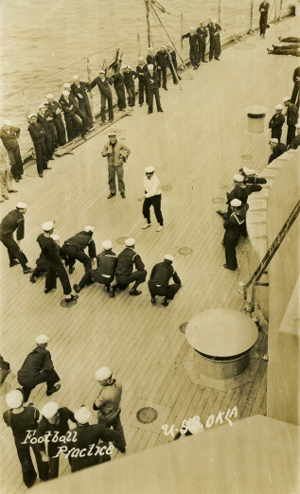 Crewmen practice their football skills on the deck of the Oklahoma in their free time (22895.99, Lyman T. Branch Collection, OHS). 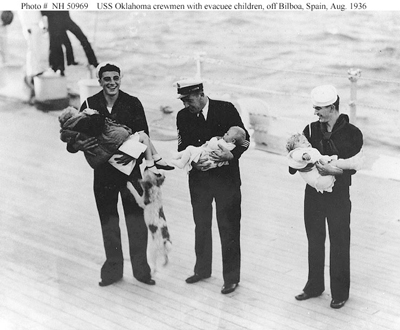 Crew members cradle children evacuated from the Spanish Civil War as they board the Oklahoma off the coast of Bilbao, Spain, in 1936 (image NH 50969, courtesy of Naval Heritage & History Command).