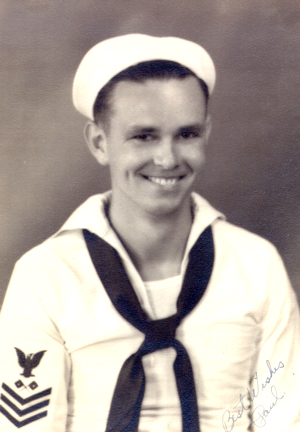 Paul Goodyear was born in 1918 in Michigan. He joined the Naval Reserve in September of 1940 and was mustered on board the USS Oklahoma on March 31, 1941. Signalman Third Class Goodyear was still learning his way around both the Navy and the USS Oklahoma when the Japanese Empire attacked Pearl Harbor the morning of December 7, 1941. He was at his duty station on the signal bridge when the first bombs were dropped on the hangar at Ford Island. Over the course of the battle, Signalman Goodyear managed to abandon ship and aid in the defense of the USS Maryland after being rescued from the harbor. After the USS Oklahoma capsized, Signalman Goodyear was reassigned to the USS Indiana until 1943 when he joined the staff of Battleship Division 8. He served there until the end of World War II.

Here are Goodyear's own words, describing his actions after the Oklahoma was hit by Japanese torpedoes:

...I left the signal bridge and went down to the boat deck. And this is again a tribute to my stupidity and ignorance. I got down on the boat deck. I remembered that I was supervisor for the signal bridge and had left the code book there. That code book was as secret as the daily paper. It had ordinary flag codes and was very simple. One of the most ignorant things I did was to go back up to the signal bridge and that code book was about as big as the Kansas City phone book, but it had lead covers on it. I carried that cotton-picking thing down and over the side and finally carried it on the upturned hull and offered it to the Executive Officer, Kenworthy. I was standing on the bottom of the ship and he looked at me like I was the most stupid person in the world for doing that, and I was. He said, 'get rid of that thing,' and threw it over the side." 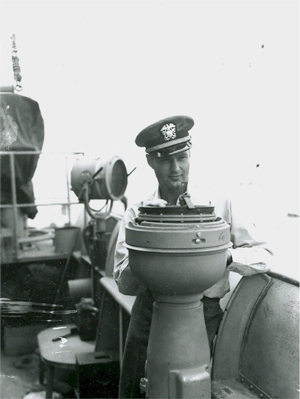 Herbert Rommel was born in 1915 in Philadelphia, Pennsylvania. He joined the Naval Reserve in 1934 and was commissioned an ensign in 1938. On the morning of December 7, 1941, Ensign Rommel was the Division Officer of the 4th Division, which ran the number three gun turret at the stern of the Oklahoma. Sunday was Ensign Rommel's day off, so he was eating breakfast as the first bombs struck Ford Island. As Ensign Rommel ran to his station, he alerted the ship to the air raid over the loudspeakers. When the Oklahoma began to capsize, Ensign Rommel ordered his crew to abandon the turret. They escaped into the harbor, where Rommel was picked up by a motor boat. He then spent the rest of the morning picking survivors out of the water and taking them to the Solace, a Navy hospital ship.

After the events of December 7, Ensign Rommel was transferred to the USS Gridly, a destroyer. He served on the Gridly for three years, working his way up to Executive Officer, and then commanded the USS Wilkes for the last year of the war. Herbert Rommel served in the Navy until 1969, retiring with the rank of captain from his post as chief of staff of Naval Station Newport in Rhode Island. Captain Rommel passed away in 2007 and is buried in Arlington National Cemetery.

Here is Captain Rommel's description of the Oklahoma capsizing:

The manhole covers on the blisters had been removed to air them out in preparation for the inspection on Monday and that was the reason the Oklahoma rolled over instead of sunk. As soon as she took the hits on the port side and started to list, as soon as the blisters got underwater, the water just poured in and there was no way the damage control station could have counter flooded the ship to keep her on an even keel. She rolled over in about 10 minutes. Looking back from in the water, it was just like a sail boat [sic] going over, slow, inexorable, nothing you could do about it. Nothing swift or rushing, it just slowly went over.

Walter Staff was born in 1917 in Magna, Utah. He grew up in Salt Lake City, where he joined the Navy in February of 1940. Later that summer he was assigned to the USS Oklahoma. Staff was a carpenter's mate, second class. On the morning of December 7, he was fixing a chair in the woodworking room when the order for general quarters was sounded. Staff's duty then was to check for water leaks, which is what he was doing when the Oklahoma was struck again by torpedoes and began to list. He was trapped in the Oklahoma as the boat capsized. He stayed in the hull of the Oklahoma for two days, until he was rescued on Tuesday, December 9. Staff was one of the thirty-two sailors rescued from the Oklahoma. After the attack, he was assigned to the USS Medusa, a repair ship. Walter Staff passed away in Utah in 1997 and is buried in the Utah Veterans Memorial Park. 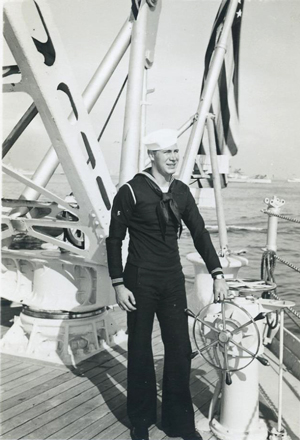 Here is Walter Staff's account of being rescued with his friend, Centers, from the Oklahoma:

"It took them about an hour to cut through the double bottoms [of the hull]. They just couldn't cut wildly in there because there was fuel oil and ammunition...they drilled a hole first, they had tapered plugs used in test holes. We were under quite a bit of water pressure down there, you could hear the air going out and this shot of light came down from above and I watched the water coming up and I watched that hole. That hole allowed the water to come in as the air pressure went out...the rescue team left because they were afraid of being flooded. That was the worst feeling because we were that close and they left...there was a linen room and I told Centers that if we could get in the linen room it would be dry. We were in water and fuel oil, so I beat the lock off...so we got in this linen room and dogged the door down so we were in a compartment that was not going to be flooded...there was a manhole and they didn't have to cut through. They said stand clear because the hatch was going to drop from overhead. They beat the dogs off and the hatch came down.