Home |   Learn |  The Parts of the USS Oklahoma

The Parts of the USS Oklahoma

Masts are tall structures in the middle of a ship that are used to mount sails or provide a place for seeing things that are far away. On the USS Oklahoma, the masts were used to spot targets and direct fire from the ship's main guns. The mast towards the bow of the ship is called the foremast, while the mast towards the rear of the ship is called the mainmast. During World War II, most battleships had one or two masts, while newer battleships might not have one at all. A person standing on the top of one of these masts would be standing over 120 feet, or twelve stories, above the water. 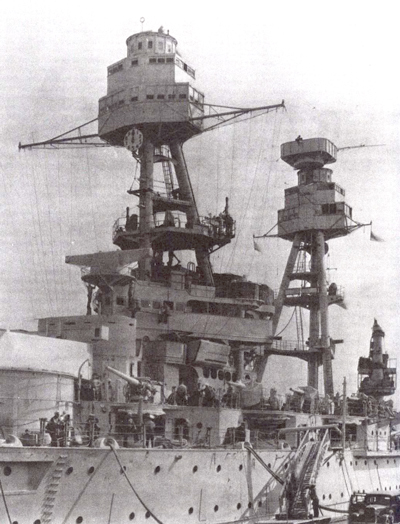 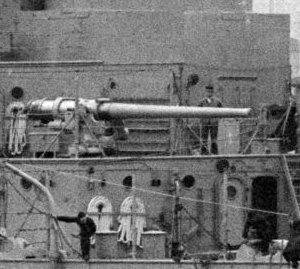 The Oklahoma had fourteen of these 5-inch 51 caliber anti-aircraft guns. This is a photo of a similar gun on the USS Texas in 1914 (OHS Collections).

A battleship's funnel is also called a smokestack, or stack. The funnel is where the exhaust from a battleship's boilers is released. The Oklahoma's boilers boiled water to make steam for the ship's steam engines. The USS Oklahoma had three boilers and all of their exhaust was released from this one funnel. The USS Nevada and the USS Oklahoma were the first battleships to have only one funnel. Older battleships might have two or three funnels. Knowing how many funnels are on a ship can be helpful in identifying ships at sea, especially when you are looking for targets. 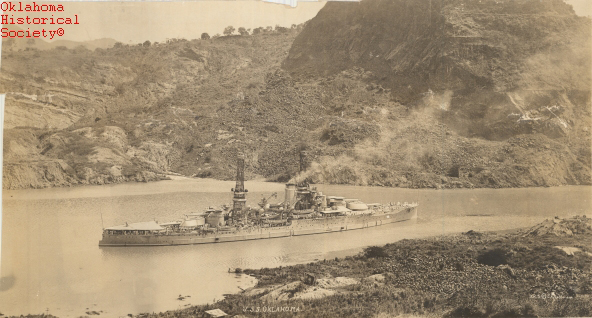 As the USS Oklahoma travels the Panama Canal, you can see smoke rising from the funnel (OHS Collections).

When a battleship comes under attack from aircraft, it uses special guns to fire at aircraft as they fly past the ship. This is very difficult and can be like trying to hit a fly with a spitwad. Ships like the Oklahoma have special equipment in rooms like this one to help the sailors aim at their targets. Unfortunately, the Oklahoma was sunk so quickly on December 7 that no one on board was able to get a shot off to defend the ship from the Japanese attack.

The USS Oklahoma was equipped with ten 14-inch guns. These massive cannons could fire up to twelve miles away, but in order to aim well the crew needed to use special equipment to target at such long distances. A rangefinder helps the sailors know how far away their target is. The rangefinder is like a special pair of binoculars that can help you see both things far away, and tell exactly how far away those objects are. 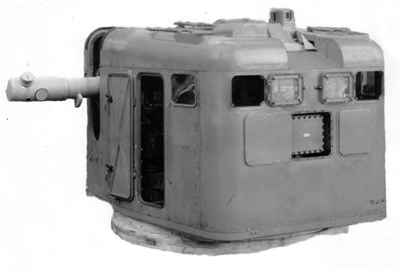 This is a Mark 19 Gun Director. The USS Oklahoma had one just like this. The knob sticking out from the box is the gun director's rangefinder (OHS Collections).

Battleships carry the largest guns on the ocean and can use them to attack heavily armored targets on land or sea. These guns are called the main guns. The USS Oklahoma had ten 14-inch guns arranged in four turrets. They are called 14-inch guns, because they fired shells that were 14 inches in diameter. That's about the same size as an average hubcap on a car tire. The turrets are like the houses for the guns, and are armored to protect the sailors loading and firing the guns. Two of the Oklahoma's turrets had three guns, and two of them had two guns. The shells fired from a 14-inch gun could hit targets twelve miles away, and weighed up to 1,400 pounds each. 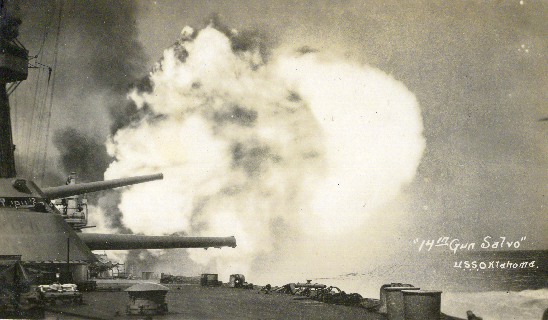 The crew of the USS Oklahoma are getting in some target practice for their 14-inch gun crews. When a ship fires all of its main guns at the same target, that is usually called a "Broadside" (OHS Collections).

The USS Oklahoma could fire its main guns so far that it relied on someone scouting in an airplane to help locate targets. This meant that the Oklahoma could hit targets too far away for anyone on the ship to see, even with the help of binoculars and rangefinders. Since the Oklahoma didn't have enough space for a normal take-off, like on an aircraft carrier, it used a catapult mounted on one of the main guns to launch the plane into the air. The plane had pontoons for landing in the water, and the crew of the Oklahoma could use a crane to pick the airplane and place it safely back on the boat once the mission ended. 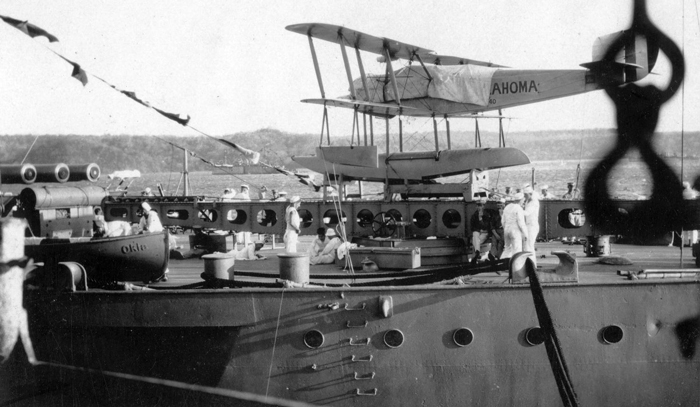 This biplane waits for its next mission on the deck of the USS Oklahoma (OHS Collections).

Also called torpedo blisters, this special plating was added to the side of the USS Oklahoma during its overhaul from 1927 to 1929. The armor creates a second skin that causes torpedoes to explode outside the actual hull of the ship. This was designed to prevent water from entering the hull of the ship and prevent it from sinking. Unfortunately, the water-tight doors on top of the Oklahoma's blisters were open during the attack on Pearl Harbor. This allowed water to enter the ship more easily, causing the Oklahoma to sink faster. Torpedo blisters are also meant to be used to protect the battleship from one or two lucky shots, not seven direct hits like the Oklahoma received in the first ten minutes of fighting that morning. 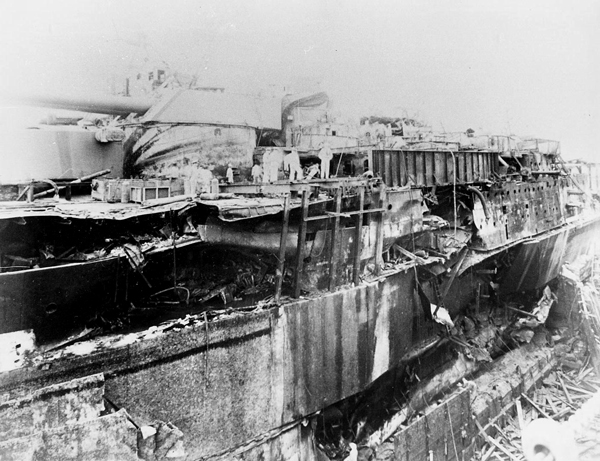 This picture was taken after the Oklahoma had been recovered from the bottom of Pearl Harbor. You can see how extensive the torpedo damage was to the outer hull (OHS Collections). 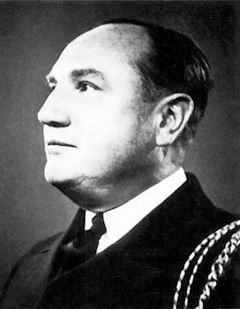 Captain Howard D. Bode of the USS Oklahoma. He was put in command of the heavy cruiser USS Chicago after the Oklahoma sank (OHS Collections).

The bridge of any ship is where the captain commands the rest of the crew. The steering controls are located there, as well as communication tools so that the captain's orders can be passed throughout the ship. On the day that Pearl Harbor was attacked the captain of the USS Oklahoma, Captain Howard D. Bode, was not on board the ship. He had gone over to the USS Maryland for Sunday services when the attack began. This meant that the Executive Officer, or XO, was in command. The XO was Commander Kenworthy.

The Rudder and Propellers

The rudder and the propellers of a ship work together to make a vessel move. The steam engine on the USS Oklahoma was connected to the propellers and made them spin. The Oklahoma was the last battleship built by the US Navy to have two propellers. The propeller spins in the water like the propeller of an airplane spins in the air, only the ship's propeller pushes the boat instead of pulling it. The rudder of a ship moves left and right based on what the helmsman does to the ship's wheel. This causes the boat to turn right or left, depending on the captain's orders. 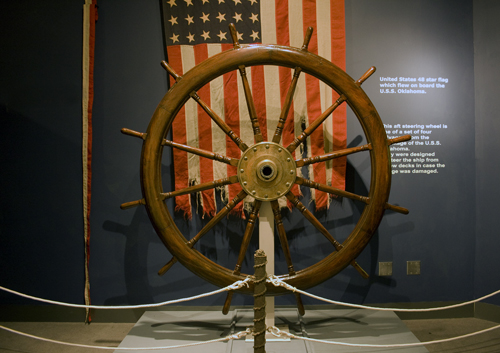 The wheel of a ship turns the rudder. This is the aft wheel of the USS Oklahoma.