Researchers can now request a search of the Federal Land Tract Books for $15.
Find out more.


In 1902 the Dawes Commission began the process of allotment of lands in Indian Territory. Before that time, land in Indian Territory was communal property and belonged to the Indian nation, rather than the individual. In Oklahoma Territory, with the exception of Indian allotments by the Jerome Commission in the late 1880s, ownership began in 1889 and spread with each of the land openings. The last land opening in Oklahoma Territory, with the minor exception of the salt plains in Alfalfa County, was in 1906. Land ownership in the Panhandle was possible after the first official survey of the area in the 1890s.

Oklahoma statehood occurred November 16, 1907, by joining Oklahoma Territory and Indian Territory. The last county in Oklahoma was formed in 1912.

The record books of the thirty judicial Recording Districts, the transitional form of government in Indian Territory just prior to statehood, were not as a general practice preserved by the newly formed state counties. Consequently, the earliest land records in those counties start in November 1907.

El Reno Land Lottery - Names Drawn This index includes more than 8,000 individuals whose names were drawn in the 1901 land lottery. The names are extracted from Names of the El Reno Land District Homesteaders Filings, 1902 published by H. H. Edwards in Guthrie, Oklahoma.
Search

The Manuscript Archives include the land lottery tickets for some individuals who participated in the 1901 El Reno and Lawton land lottery, but did not receive land.
View List

This collection contains more than one thousand applications for homestead entry within the Wichita-Caddo and Kiowa-Comanche-Apache ceded lands. The applications include names, dates, and towns.
Search 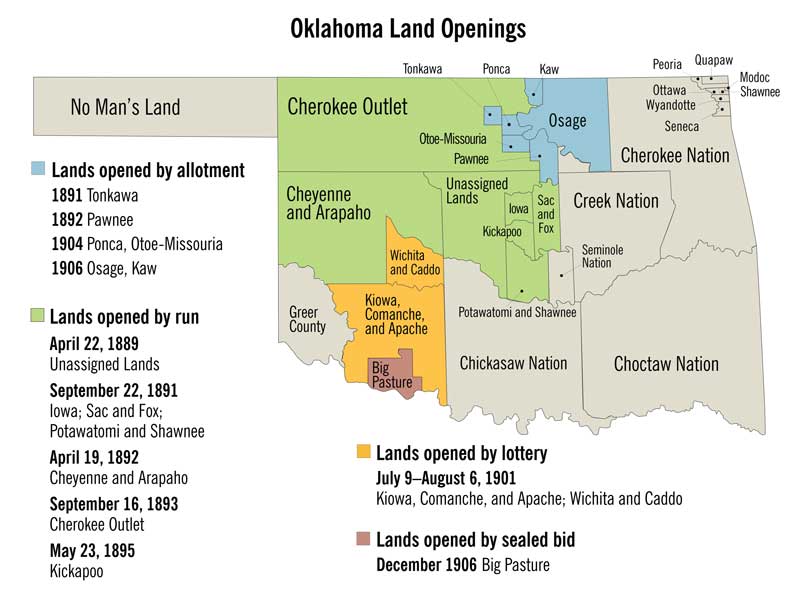 View a PDF of the map

This microfilm collection offers information about homesteaders in Oklahoma Territory from 1889 to 1907. These seventy-two volumes include a physical description of the homestead, the amount of land, date and place of original registration, and the date of the final certificate. The Tract Books are arranged by township and range, not by surname.

The Research Center offers a $15 express service to search the Land Tract Books. Researchers must include the individual's name and the county in which they received land. Use the express order form to order by mail. If you wish to order by phone call 405-522-5225.

Plat maps and atlases are available for select areas including:

The following county directories contain either legal land descriptions (section, township, range) or provide the name of the township in which the person resides.

The 1900 Oklahoma Territory Census and the 1910 Oklahoma Census often indicate the township in which a person lived at the time of the census. The Research Center has Oklahoma county township maps, which can be used to identify the township and range of the named municipal township in the county of interest.

Sections 16 and 36 of government townships (township and range) were usually reserved as school land, which could be leased but not homesteaded. The money from school land was designated by the Oklahoma Territory, and its successor the State of Oklahoma, to go to the support of specific colleges and universities. Some townships, however, had no sections of school land, and some were almost entirely school land. The School Land Tract Books are kept in the State Archives, Oklahoma Department of Libraries.

Townsite lot records were kept in Townsite Trustee Books. When available, these can be found at the town's city hall or at the county seat.