By the time the 45th Infantry Division made it into Germany, the German army was in bad shape. They had few soldiers left, very little ammunition, and even food was running out in some places. German soldiers began surrendering to the Allies in large groups; 325,000 soldiers and civilians surrendered in the Ruhr Pocket. That is the same as four football stadiums full of people.

The 45th Infantry still fought small pockets of resistance, but they ultimately ended up in Southern Germany. The war ended nine days after the 45th Infantry reached a large camp in Dachau, Germany. The camp was a concentration camp where parts of the Holocaust were carried out. The 45th Infantry was one of the first units into Dachau, where they helped liberate tens of thousands of prisoners. The 45th was headed to Munich when it found the concentration camp, so the Thunderbirds quickly moved on after a hospital unit was able to take over care of the liberated prisoners. 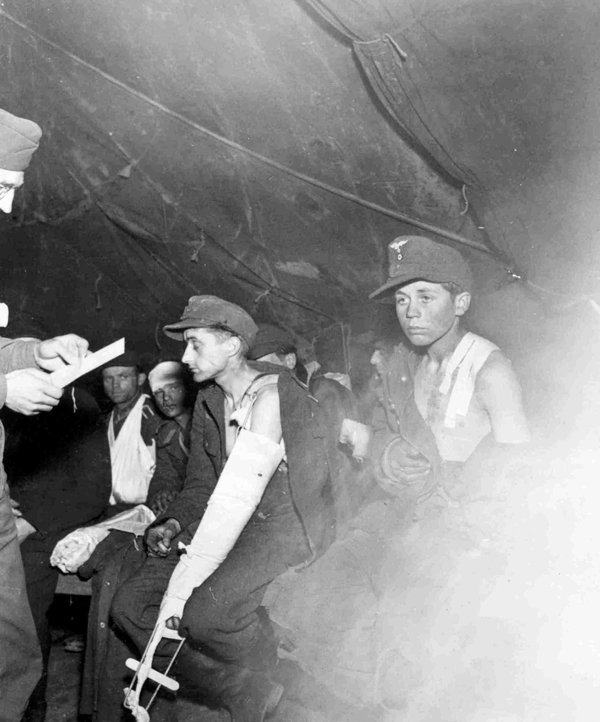 As the 45th moved into Germany, the German Army was losing more and more troops. The soldiers the 45th fought in Germany were often young boys or old men that the military had pressed into service (OHS Collections).

Nazi Germany built the first "interstate" in the world, the Autobahn. Allied troops were happy to use these roads after driving through sand, mountains, and mud for three years (OHS Collections). 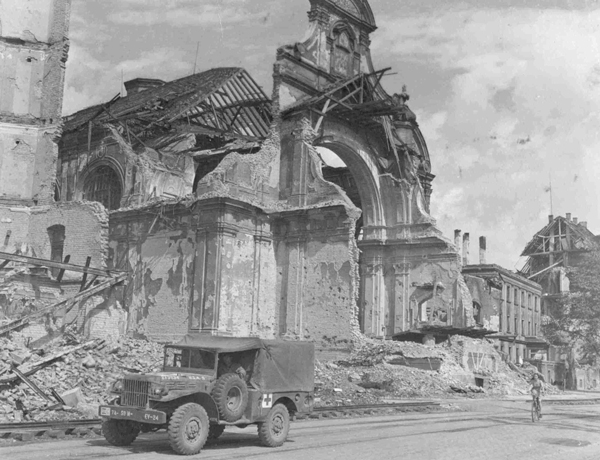 World War II is an example of a "Total War." This means that the armies involved attacked cities and civilians as well as each other. Allied bombers destroyed this church, possibly the Heilig Geist Kirche (Church of the Holy Spirit), in Munich.

Important Battle: The Liberation of Dachau and the Holocaust

The Holocaust, or Shoah in Hebrew, was the systematic and brutal genocide of somewhere between 11 and 14 million people between 1933 and 1945, perpetrated by Nazi Germany and their collaborators. This is equal to the approximate number of people who live in Oklahoma, Arkansas, Kansas, and Iowa. The two largest groups targeted by the Nazi Regime were people of Jewish heritage and the Slavic-speaking people of Poland and the USSR. The Nazi SS, or Schutzstaffel (Protection Squadron), was the paramilitary group primarily responsible for carrying out the genocide on behalf of the Nazi government, though they would not have been so successful without the aid of civilian and military collaborators throughout Europe.

The camps found in Nazi Germany were forced-labor concentration camps. The death or extermination camps, like Auschwitz, were all located outside of German borders. In a forced-labor camp, Nazi perpetrators subjected prisoners to terrible and cramped living conditions, substandard food, and random acts of torture and murder. All of the prisoners were expected to work in support of the Nazi war effort, either making weapons and ammunition or building roads and structures. Many of the people who died in these camps starved to death, while others were executed for being too weak or sick to work.

Dachau was the first concentration camp, established in 1933 by the Nazi Party. At first Dachau held only 4,800 prisoners, but by the end of the war the camp at Dachau and all of its satellite camps throughout southern Germany held approximately 67,000 prisoners, which is 10,000 people more than the population of Midwest City. Of those prisoners, 21,000 were Jewish. Over the years, more than 188,000 prisoners stayed at Dachau. Between 1940 and 1945, at least 28,000 of those prisoners died of disease, starvation, or execution. There are no accurate records for those who died between 1933 and 1939, so the total number of those who died at Dachau is unknown to this day.

On April 29, 1945, orders came down for the 45th Infantry Division to occupy and secure the concentration camp at Dachau, ten miles northwest of Munich. While other units in the Allied forces had found other, smaller camps, the men of the 45th had only heard rumors about what they might find in the camps. Most of the soldiers thought they were just like POW camps they had liberated before. All of them were unprepared for what they found at Dachau.

While most of the 45th controlled the area around the camp and the town of Dachau that is west of the camp, I Company and elements of M Company of the 157th Regiment moved to secure the camp. The men took over the camp in short order but were horrified by what they found. All of the living prisoners were starving, and many were sick with or dying of Typhus. Thousands of prisoners were dead, stored in boxcars or stacked in rooms next to the crematorium. Journalists traveling with the 45th took photos or filmed everything they saw, under orders from General Eisenhower, Supreme Allied Commander:

The same day I saw my first horror camp. It was near the town of Gotha [in Germany]. I have never been able to describe my emotional reactions when I first came face to face with indisputable evidence of Nazi brutality and ruthless disregard of every shred of decency. Up to that time I had known about it only generally or through secondary sources. I am certain however, that I have never at any time experienced an equal sense of shock.

I visited every nook and cranny of the camp because I felt it my duty to be in a position from then on to testify at firsthand about these things in case there ever grew up at home the belief or assumption that "the stories of Nazi brutality were just propaganda." Some members of the visiting party were unable to go through with the ordeal. I not only did so but as soon as I returned to Patton's headquarters that evening I sent communications to both Washington and London, urging the two governments to send instantly to Germany a random group of newspaper editors and representative groups from the national legislatures. I felt that the evidence should be immediately placed before the American and the British publics in a fashion that would leave no room for cynical doubt.

The 45th held the camp as it was so that doctors could treat the prisoners and investigators could document the atrocities for the war crimes trials, which would take place in Nuremberg after the war. Then they moved forward to take the city of Munich. 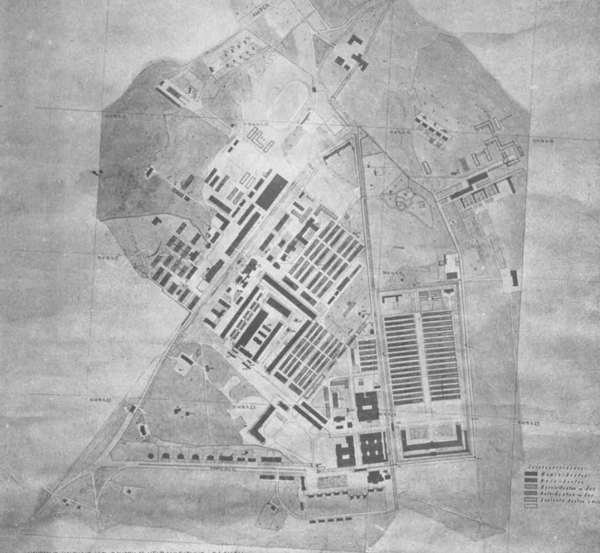 An image of an SS map of the Dachau forced-labor camp. The large rectangular area in the lower right is the prisoner camp, where over 30,000 prisoners were cramped into inadequate housing at the main camp. An almost equal number of prisoners lived dispersed in thirty "satellite" camps throughout southern Germany (OHS Collections). 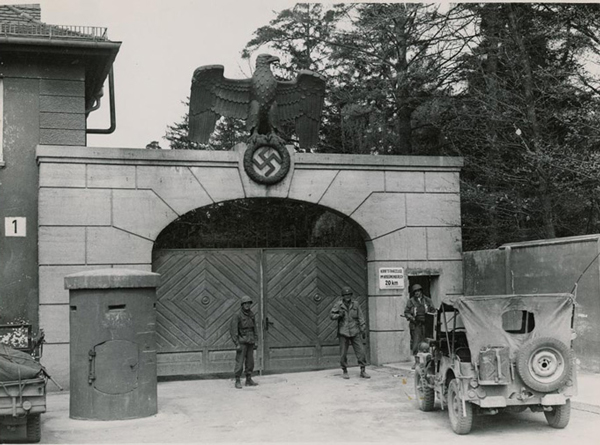 These soldiers are guarding the main gate to the SS compound that surrounded the concentration camp shortly after its liberation (image courtesy of the National Archives Records of the Office of War Information). 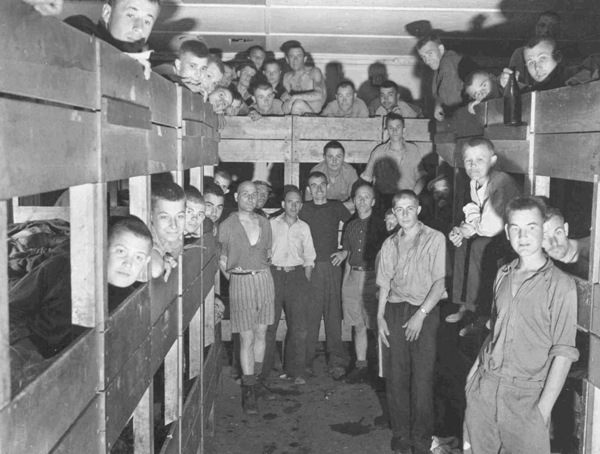 Even though Allied forces had freed the prisoners of Dachau, there was no medical facility large enough in the area to help the more than 30,000 people suffering from starvation and Typhus. Unfortunately, the former prisoners had to recuperate in the same barracks where the Nazis had sought to work them to death only weeks before. This time the Allies gave them proper bedding, clothes, food, water, and medical care before eventually releasing them. 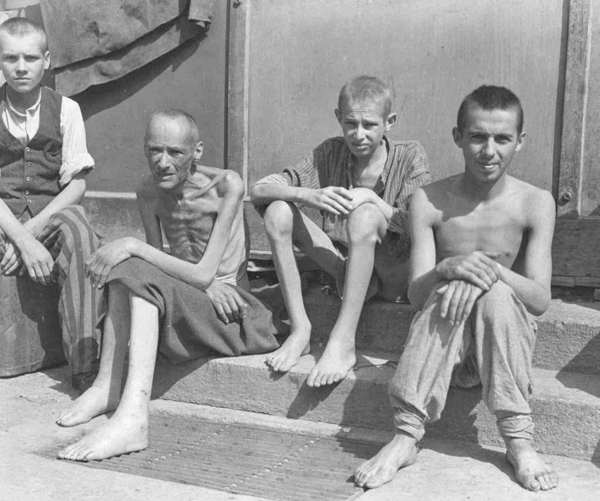 All of the prisoners liberated at Dachau were in various stages of starvation (OHS Collections). 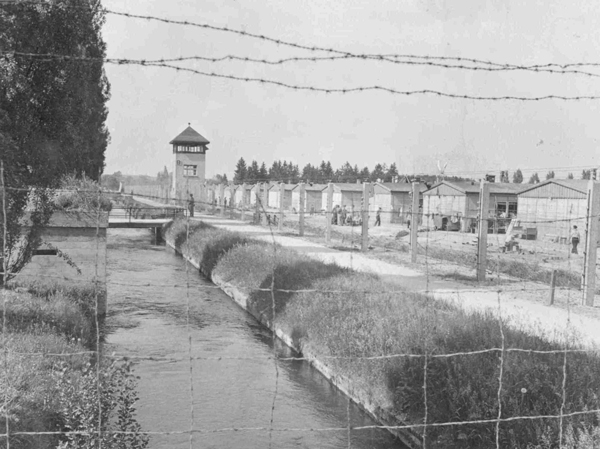 The Nazis used guards, attack dogs, barbed wire, cement walls and moats, machine-gun towers, and electrified fences to keep the prisoners inside the concentration camps. Here, a US soldier is on guard to protect the former prisoners and keep others out to prevent the typhus epidemic from spreading (OHS Collections).