Resistance Resistance means going against something. African Americans resisted segregation and racism in many ways and changed society by standing up for what was right. Protests are one form of resistance. A protest is when an individual or group of people publically show that they disagree with something they feel is wrong.

One type of resistance is non-violent resistance. Non-violent resistance is people deciding not to fight even if they are attacked during a protest. Martin Luther King Jr. promoted non-violent resistance all around the country and inspired Oklahoma civil rights leader Clara Luper. Clara Luper is considered the mother of the Civil Rights Movement in Oklahoma. She was a teacher and an advisor for the Oklahoma City National Association for the Advancement of Colored People (NAACP) Youth Council. She, along with her students, started one of the first sit-in protests in the country. A sit-in is meant to protest segregation at public places like restaurants, where African Americans were not served because of the color of their skin. On August 19, 1958, Luper and her students went to Katz Drug Store in Oklahoma City, sat at the front counter, and ordered cokes. They were denied service, but stayed until closing and returned the next day. They did this until the drug store agreed to serve them. This sit-in, and Clara Luper, became famous across the nation. Luper continued non-violent resistance to desegregate public places and was arrested several times for her non-violent protests.

In Oklahoma, politics also became an important tool for fighting segregation. Although there were many African Americans in Oklahoma City, the voting districts were divided unfairly so that whites always won. In 1964 the Oklahoma City voting districts were fixed, and E. Melvin Porter became the first African American elected to the State Senate in Oklahoma. Porter was also the president of the Oklahoma City NAACP chapter. Four years later in 1968, Hannah Diggs Atkins also made history by being the first Black female elected to the Oklahoma House of Representatives. Not only was Atkins a strong supporter of African Americans, she also focused on helping women, children, the elderly, and prison inmates in the state. Atkins served the House for twelve years and then became both the secretary of state and the secretary of human services, making her the highest-ranking female official in Oklahoma's history up to that point. President Jimmy Carter appointed her as a delegate to the United Nations in 1980. 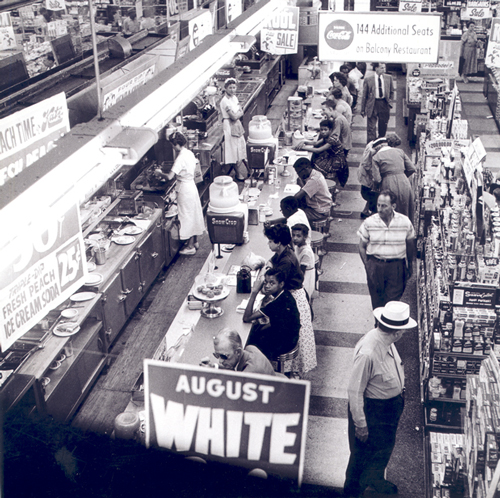 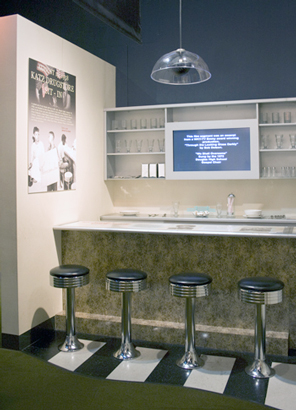 Replica of the Katz Drug Store counter, In Pursuit of the Dream exhibit, Oklahoma History Center. 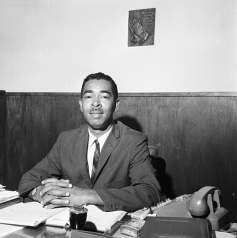 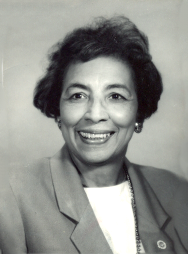