The Great War affected everyone in the United States in many different ways. Oklahoma is home to war supporters, protesters, war heroes, and draftees. In 1917, Congress passed the Selective Service Act. This required all men to register for military service if they were between twenty-one and thirty years old.

This Act and the war itself faced resistance in many places and fueled a small uprising in Sasakwa, Oklahoma in 1917. The issues with the war ignited an already hostile group of land owners and tenant farmers, who joined the Socialist Party in the hopes of changing government and public policy about things such as land use and land taxes. They met near Sasakwa, planning to march to Washington DC, eating beef and roasted green corn on their way. Their uprising ended with a meeting of posses, resulting in three dead and more than 400 arrested after they burned several bridges and cut telegraph lines.

The First Oklahoma Infantry unit was a National Guard unit. It was the first group from Oklahoma to be called upon in the Great War. They met with other units in 1917 at Camp Bowie, Texas, to become a part of the Thirty-Sixth Infantry Division.

The Thirty-Sixth arrived in France in the summer of 1918 and returned to Texas in spring of 1919. During their time in France, the Thirty-Sixth Infantry fought victoriously in the battle at Ferme Forest.

In France, the communications code was intercepted and broken by the Germans. Needing a way to get their messages through company lines, runners were used, but several runners were captured and their messages never delivered. After overhearing Choctaws speaking to each other in their native language, an officer began training the "code talkers." The code talkers sent messages via writing and by field telephone, resulting in several victories. Many tribes became code talkers including men from the Choctaw, Cherokee, Comanche, Cheyenne, and Osage tribes. 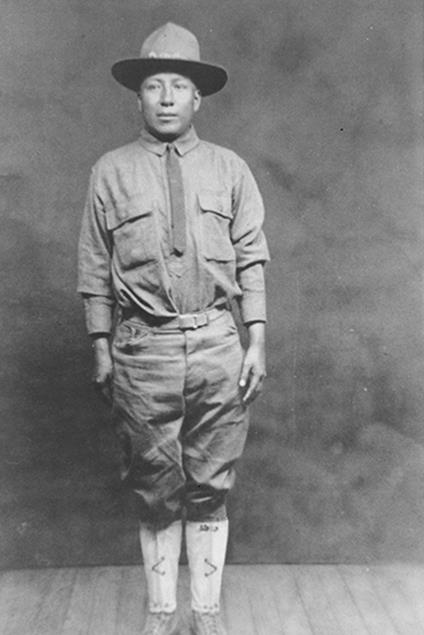