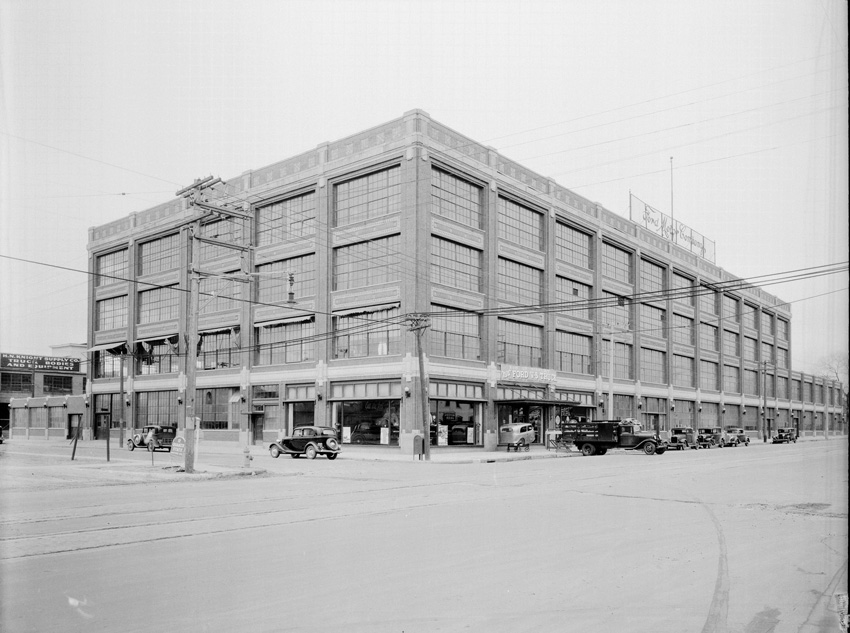 In the early twentieth century, as Americans made a transition from horse-drawn buggies and wagons to motorcars and trucks, automobile manufacturing emerged in Oklahoma. Before the making of cars became an organized process under Henry Ford's tutelage, a few creative individuals were producing various models. For instance, in 1909 an independent automaker briefly operated a shop in Frederick in Tillman County. Soon larger-scale, assembly-line factories began to appear in the state.

In June 1917 a group of Oklahoma City business leaders, headed by James M. Aydelotte of the State Board of Affairs and Floyd Thompson of the Ozark Trails Highway Association, formed the Midland Motor Car and Truck Company. They sold stock in order to construct a plant south of town; they planned to make the Oklahoma Six passenger car and a truck called the Ozark. They anticipated producing three cars and seven trucks per day. However, World War I interrupted the plans. The plant was constructed in 1918, and in October it began making trucks under a U.S. Army contract. After the war the company had to be reorganized due to financial mismanagement and the indictment of two of its stock salesmen for embezzlement. The federal contract was cancelled. In October 1919 the Wichita Motors Company, a Texas concern that manufactured trucks, bought the plant and produced the Wichita model truck there, into 1922.

Similarly, other small manufacturers produced automobiles in the early part of the twentieth century. Oklahoma Auto Manufacturing Company, established in a factory near Okay and North Muskogee in 1915 by C. E. Harris, built heavy-duty O. K. oil-field trucks in the World War I era. The operation folded during the Great Depression. In the 1910s and 1920s the W. R. Lantz Manufacturing and Supply Company of Muskogee made car and truck bodies, as well as bodies for hearses and ambulances. In Enid, William C. Allen and other entrepreneurs from around the state established the Geronimo Motor Company and incorporated it in mid-1917. By June of that year the firm had taken orders for fifty cars, and by September a thirty-thousand-square-foot factory had been constructed. It made tractors, a roadster, and a five-passenger, full-size automobile. After building one thousand cars that were distributed by agencies in Kansas, Nebraska, West Texas, and Oklahoma, Geronimo ended production in 1920 when the factory burned. The Tulsa Automobile Corporation capitalized in 1917 at $2 million with T. J. Hartman, president of the Producers State Bank of Tulsa, as president. Grant Stebbins, of the Gladys Bell Oil Company, was a director. By 1918 the company was producing the "Tulsa Four," a thirty-five-horsepower automobile. It was available with a four-cylinder engine and by 1921 with a six-cylinder. The factory produced ten cars per day that were distributed through dealers in Tulsa and Oklahoma City.

Major automobile manufacturing corporations have also maintained a lengthy presence in the state. In 1915 Ford Motor Company constructed an assembly plant in downtown Oklahoma City. The factory opened in August 1916 and soon produced its first cars for regional distribution. It employed 350 workers at its peak of operation. As the car industry suffered the effects of the Great Depression, in 1931 Ford reorganized the facility as a regional parts depot. It endured through 1967 and then closed. General Motors constructed an Oklahoma City assembly plant in 1977–79, the corporation's largest at that time. The first models, front-wheel-drive Chevrolet Citations and Pontiac Phoenixes, came off the line in April of 1979. At its peak employing five thousand, the plant was scheduled to cease production in 2006.

After World War I ended, automotive-related manufacturing came to include the tire industry. In 1919 the U.S. Compression Inner Tube Company constructed a plant between Sand Springs and Tulsa. It manufactured a "puncture proof" inner tube and automobile tires during the 1920s. B. F. Goodrich maintained a plant at Miami from 1945 to mid-1986. Three other tire plants operated in the state in the mid-twentieth century. Dayton Tire, a subsidiary of Firestone Tire and Rubber Company, opened a thirty-two-acre plant in Oklahoma City in 1969, and Uniroyal Goodrich constructed a plant in Ardmore in 1970. By 1973 the three produced more than fifteen million tires a year. Goodyear Tire and Rubber Company constructed a plant in Lawton in 1979. By the twenty-first century there were five makers of new tires, employing 6,755 workers.

Other auto parts have also been made in the state. In 1938 Fred Jones of Oklahoma City opened an automotive products plant there, and through the twentieth century the Fred Jones Manufacturing Company served as a Ford Motor Company authorized parts reconditioner. Unit Parts Corporation, a division of Borg Warner, maintained a remanufacturing plant for starters and alternators in Oklahoma City from the 1970s. In March 2005 the plant was purchased by Remy International, Incorporated. In 1972 Gabriel Ride Control, manufacturers of shocks and struts, a division of Arvin Industries headquartered in Tennessee, opened a plant in Chickasha. Into the twenty-first century Gabriel has made shock absorbers and struts for automobiles and trucks.

The following (as per The Chicago Manual of Style, 17th edition) is the preferred citation for articles:
Dianna Everett, “Automotive Manufacturing,” The Encyclopedia of Oklahoma History and Culture, https://www.okhistory.org/publications/enc/entry.php?entry=AU002.