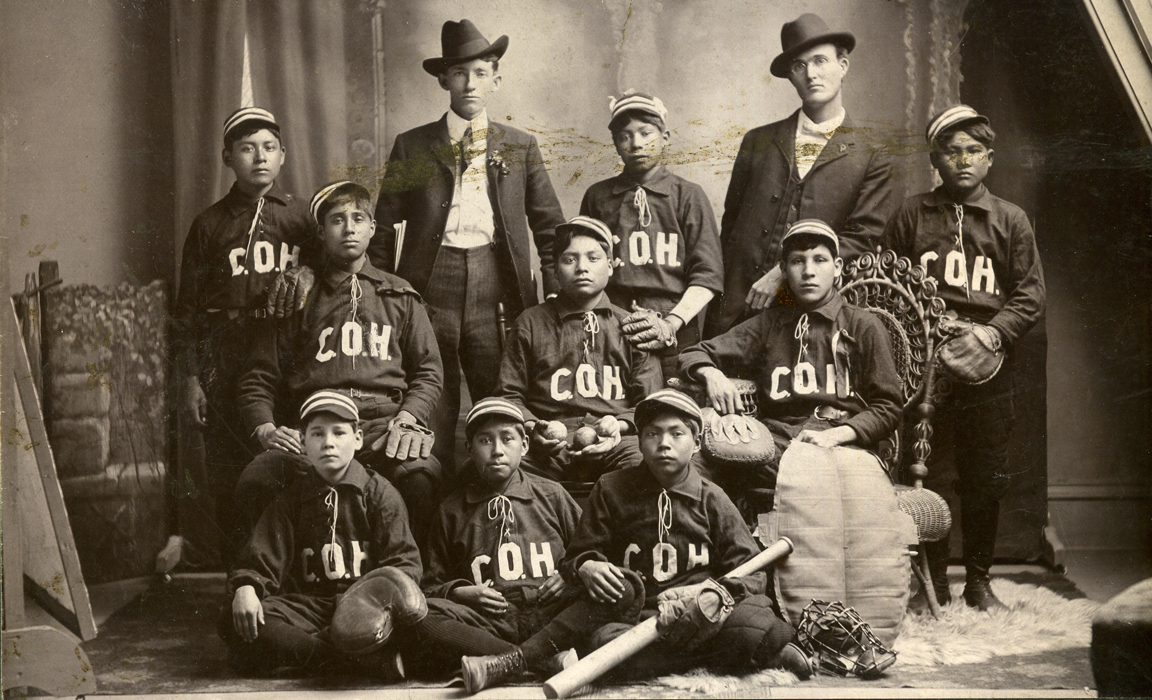 The story of Oklahoma baseball is as complex, succulent, and patriotic as apple pie. The game we call baseball evolved from children hitting balls with bats and from the English games cricket and rounders, the latter game often referred to "townball."

Baseball gained prominence during the Civil War. Bats and balls could be carried easily by soldiers, and a playing field could be created anywhere. At the conclusion of the conflict, soldiers settled throughout America, including Indian Territory and the Unassigned Lands. In addition to their heritage and their work tools, they brought a new diversion, baseball. Soldiers at various territorial forts were probably the first to play some form of baseball within present Oklahoma.

In 1880 coal miners from Ohio and Pennsylvania settled near Krebs in Indian Territory, and baseball provided them a clean, healthful diversion from the rigors of mining. On July 4, 1882, the first organized baseball game was played at Krebs. A crowd of three hundred gathered to watch Krebs host nearby Savanna. Using sacks of hay and cans for bases, the game included fan violence, gambling, and anguish for the Krebs catcher, who played without a glove or mask. Krebs prevailed thirty-five to four.

In 1889 Joe "Iron Man" McGinnity, later elected to the National Baseball Hall of Fame, relocated to the coal mines of Krebs. One of the leading organizers for the game in Indian Territory, he became the Krebs pitcher. McGinnity was an idol among local baseball fans. Largely because of his influence, ball clubs expanded rapidly in the territory. In the 1890s Hartshorne, Alderson, Tahlequah, Checotah, Eufaula, Muskogee, Vinita, Wagoner, Lehigh, Coalgate, and Wilburton fielded teams.

Baseball was an interesting part of early Oklahoma Territory. Shortly after the 1889 land run, new residents of Oklahoma City, Stillwater, Kingfisher, and Guthrie participated in Sunday afternoon games. Even the Apaches, interned at Fort Sill with their famous chief Geronimo, played baseball while soldiers watched. Indian boarding schools regularly matched teams against one another.

Townball or town baseball played a prominent role in Oklahoma. Every community found players to challenge neighboring towns, often recruiting outsiders to vanquish rivals. These teams generated a source of pride for local residents. Locals enthusiastically built a grandstand and prepared the field for play. This townball begat "sandlot" baseball. State tournaments drew thousands of fans. In 1927 the first state sandlot tournament was sponsored by the Daily Oklahoman. Over the next twenty years Oklahoma sandlot teams led the nation in winning and maintaining championship-caliber clubs. Many teams were in commercial leagues. Their names denoted their sponsors: the Halliburton Cementers, Eason Oilers, Champlin Refiners, the Oklahoma Natural Gassers, and Oklahoma City West Side Grocers. Oklahoma sandlot baseball produced many future major league players.

Despite economic woes, downtown dilapidation, and loss of population, small towns all across Oklahoma keep a meticulously manicured high school baseball field. High school teams personify a strong identity for a town. This is especially true for smaller towns that lack the student body to field eleven-man football teams. In 1906 Ardmore reigned as territorial champion, although no official sanction existed. Starting in 1914 the high school winners of interscholastic tournaments held at the University of Oklahoma (OU) and Oklahoma A&M became known as "state champs," but again with no official endorsement. Rarely did the same school win both. In most years there were dual champions, except in 1934 and 1935 when the two tournament winners played a series. In 1947 the Oklahoma High School Athletic Association, now the Oklahoma Secondary Schools Activities Association (OSSAA), created a tournament that determines a sanctioned state champion in the various high school classes. Asher and Cameron have stood out as small-town schools. Asher has captured forty-three state championships (spring and fall) from the beginning of the tournament until the end of twentieth century, and Cameron won six consecutive spring tournaments beginning in 1993. One of the greatest high school teams was the 1953 undefeated Capitol Hill squad. Oklahomans have held a proportionately high number of the national baseball records, including sixteen in 1982.

Similarly, college baseball has a grand tradition in the young state, sending many of its players to the next level. Oklahoma State University (OSU) reflects this strong heritage. OSU won the National Collegiate Athletic Association (NCAA) in 1959 but was a runner-up five times and a regular visitor to the College World Series. Under coach Gary Ward and with players including Robin Ventura, Pete Incaviglia, Doug Dascenzo, Jim Traber, and Mickey Tettleton, the Cowboys dominated the Big Eight, winning sixteen straight Big Eight Tournaments. Ventura's 1987 fifty-eight-game hitting streak, which is two games longer than Joe DiMaggio's major league professional hitting streak, continued as a college record into the twenty-first century. OU has won two NCAA championships, one in 1951 and one in 1994. The university sent many players to the majors, including Dale Mitchell, Jack Armstrong, and Bobby Witt. Southeastern Oklahoma State University has played exceptional baseball as well, winning ten Oklahoma Intercollegiate Conference championships beginning in 1969 through 1997 when the conference discontinued. Oral Roberts University, Oklahoma City University, University of Tulsa, and Seminole State College have all had nationally contending teams and have prepared players for profession-al baseball.

A legion of Oklahomans have graced the professional baseball diamond in the twentieth century. The most famous was Mickey Mantle, born in Spavinaw, reared in nearby Commerce, and star in center field for the New York Yankees in the 1950s. Rogers Hornsby began his professional baseball career for the minor league Hugo, Oklahoma, team in 1914 and later managed the Oklahoma City Indians in 1940 and 1941. Carl Mays of Kingfisher was the best pitcher on the legendary 1927 New York Yankees and holds the dubious distinction of causing major league baseball's only fatality. In 1920, before batting helmets were used, Mays's submarine ball cracked the skull of Cleveland's Ray Chapman, who died the next day.

Jim Thorpe, born in Prague, played in the major leagues from 1914 to 1919. The Waner brothers, Paul and Lloyd, grew up in Harrah and spent record-setting years in the majors. Both are members of the Baseball Hall of Fame. Jay Hanna "Dizzy" Dean, born in Arkansas, left his family home at Spaulding, Oklahoma, to cast a giant shadow on the baseball field and later in the broadcast booth; Dean is a member of the Baseball Hall of Fame. Hall of Famer Carl Hubbell, a native of Lincoln County, was one of the greatest pitchers of all time. John "Pepper" Martin, of Temple, led off the first baseball All-Star game in 1933. He was the heart and soul of the famous St. Louis Cardinals "Gashouse Gang."

Allie Reynolds of Bethany and Warren Spahn, who was sent to Oklahoma from his native New York during World War II, are two of the most effective hurlers in the history of the major leagues. Spahn, a member of the Hall of Fame, won more games than any other left-handed pitcher. Jerry Walker of Byng is the youngest pitcher to ever start an All-Star game. Johnny Bench of Binger may be the best catcher to ever play the game. Bobby Murcer of Oklahoma City won the hearts of New York fans both on the field and from the broadcast booth. Hall of Famer Willie Stargell was born in Earlsboro. Superstar Billy Williams began his professional career for the Ponca City Jets minor league squad. Dorrell "Whitey" Herzog received his nickname while playing for the 1949 McAlester Rockets. Oklahoma City native Joe Carter hit a ninth-inning, never-to-be-forgotten home run to power Toronto to the world championship in 1993. Atlanta Braves manager Bobby Cox was born in Tulsa. Manager Alvin Dark was born in Comanche.

From 1904 to 1960 thirty-seven different Oklahoma towns fielded professional baseball teams, before economics limited the state's two largest cities, Oklahoma City and Tulsa, to minor league teams. A phenomenal number of major league baseball players have passed through Oklahoma, have either been born in or died in Oklahoma, or have played sandlot, college, or minor league baseball in the Sooner State. Although Oklahoma has a reputation as a football state, Oklahomans have had a more significant professional impact on the baseball diamond.

The following (as per The Chicago Manual of Style, 17th edition) is the preferred citation for articles:
Bob Burke, “Baseball,” The Encyclopedia of Oklahoma History and Culture, https://www.okhistory.org/publications/enc/entry.php?entry=BA030.