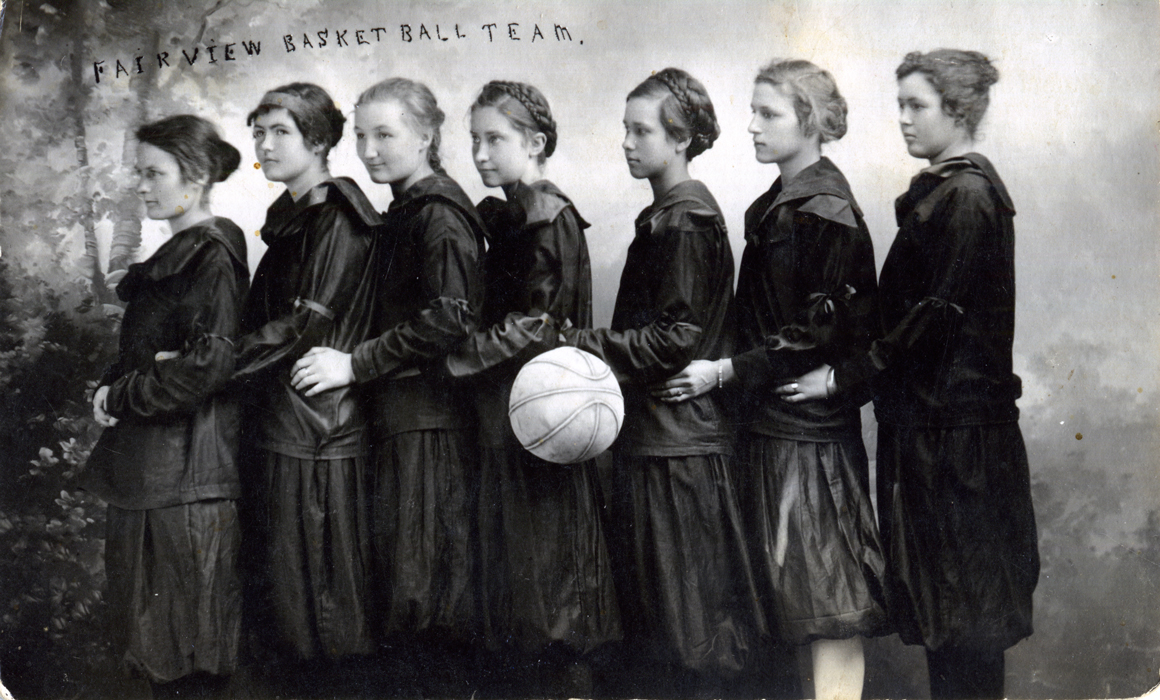 Basketball's development paralleled Indian Territory's opening to non-Indians and evolution into the state of Oklahoma. After Dr. James Naismith invented it at Springfield, Massachusetts, in 1891, the game quickly gained popularity. The year 1907 marked the first year for the University of Oklahoma and Oklahoma State University squads, and the women of OSU began in 1973 and OU women's first season came a year later.

Oklahoma girls' high school basketball also has a long tradition. An unofficial championship emerged in 1919, and a sanctioned championship came in 1924. Before 1971 only nine other states offered girls' championship competitions. Bertha Teague, one of the foremost women's coaches in the nation, started coaching in Byng, Oklahoma, in 1927 and won 1,157 games and eight state championships.

Oklahoma high schools' girls played six-on-six basketball longer than any other state; in 1987 the Oklahoma Secondary School Activities Association allowed a team to choose between five-on-five and six-on-six. After the 1995 season all the high schools converted to the five-on-five game. In six-on-six, three girls of a team try to score on one goal, and the other three stay at the opposite goal, playing defense. None of the girls could cross half-court. Seemingly archaic in an era of Title IX and the WNBA, these rules changed several times after 1919.

Originally, girls had three courts or zones, and the defenders advanced the ball to the centers in the middle of the court and then passed the ball to forwards, who attempted to score. Girls had a limited number of dribbles, could not touch the opposing player, and were not allowed to block shots. In 1939 the rules changed to only two courts, and in 1951 both boys and girls could use the same rules inside those courts. In forty years as coach and administrator at Lindsay, Charles Heatly pushed the high school girls' basketball tradition to another level, taking teams to the state tournament fourteen years, winning the championship twice, beginning the first girls' basketball camp in the state and a very early one nationally, and founding the state's All-State game.

In towns not large enough to field a football team, basketball and baseball have reigned. Both small-town and inner-city schools have produced future NBA stars and top-notch basketball teams. In 1918 Oklahoma crowned a state champion in basketball, the first Oklahoma state championship in any sport. The state career-points leader, Ty Harman (3,587 by 1989), came from the small town of Maude, but the most recognized state players, Wayman Tisdale (Tulsa Washington, 1982) and Mark Price (Enid, 1982), hailed from cities. The 1982 class, including Tisdale, Price, Anthony Bowie (Tulsa East Central), and Steve Hale (Jenks), may be the greatest in state history.

One of the "first families" of Oklahoma basketball is the Price family. The patriarch, Denny, scored forty-two points in the finals to lead Norman High to the 1956 state championship, then starred for the University of Oklahoma and the Phillips 66ers, and eventually became the head coach at Phillips University. The United States Basketball League team, the Oklahoma Storm, chose him as a co-head coach for its inaugural 2000 season. The sons, Mark, Matt, and Brent, also excelled in high school basketball, and all three played college ball. Mark and Brent performed in the NBA. Denny died in December 2000 while playing basketball with his sons.

The public school systems of in Oklahoma, like most of the nation, were segregated until Brown v. Board of Education of Topeka, Kansas (1954). Basketball became very popular in small towns with black populations and segregated schools. The historically All-Black towns Taft and Boley won state championships even after integration. Taft won the Class C championship three years in a row (1960–62).

Many of these black players went to Oklahoma's African American college, Langston, and played for Zip Gayles, who coached athletic programs there for thirty-five years (1930–65). In 1946 Gayles, who won 571 games in his career, coached Marques Haynes, the twins Lance and Lawrence Cudjoe, and Frank Luster to an upset victory over the Harlem Globetrotters in Oklahoma City. Haynes and the Cudjoes joined the Globetrotters after college. Crescent native Hubert "Geese" Ausbie was also a Harlem standout. Lawrence Cudjoe coached Oklahoma basketball for twenty-six years at Pawnee Lincoln and Oklahoma City Douglass high schools and at Langston.

The geographical distribution of Oklahoma's early- to mid-twentieth-century high school state championships shows that more were won by teams from the central, northern, and western portions of the state. Southern Oklahoma's rural makeup may have been a factor. There may have been numerous reasons, including coaching, economics, or cultural interests in these environments. After segregated competition ended in 1955, Okmulgee, Muskogee, Seminole, and Okfuskee counties, with larger percentages of African Americans than the rest of the state, began to take championships.

Mention Division I college basketball in Oklahoma and the name Henry Iba resounds. He coached at Oklahoma A&M (now Oklahoma State University, OSU) for thirty-six years. Anchored by Missouri native Bob Kurland and an all-Oklahoman cast, his teams won national championships in 1945 and 1946. Iba also coached two gold-medal–winning Olympic basketball teams (1964 and 1968) and a silver-medal winner (1972). Known for his tough defense, he created a network of disciples who coached Oklahoma high school basketball for decades.

At the University of Oklahoma (OU), Bruce Drake was also an innovator. His "Drake shuffle" was a series of picks to set up a wide-open, mid-range jump shot. Through a Saturday Evening Post article, he helped outlaw goaltending. After playing on the 1928 undefeated OU basketball team that won the Missouri Valley Conference and won the first Big Six title the next year, Drake coached the 1939 Oklahoma team to the National Collegiate Athletic Association's (NCAA) first final four, losing to Oregon in the semifinals, and to the final game of the 1947 tournament, losing to Holy Cross. In 1988, coached by Billy Tubbs and led by Mookie Blaylock, Harvey Grant, and Stacey King, OU played for the national championship but lost to Danny Manning and the Kansas Jayhawks.

Other Division I teams have had success. Bryant Reaves and Randy Rutherford led an Eddie Sutton–coached Oklahoma State University team to the final four of the NCAA tournament in 1995, the first time since 1951. Since Nolan Richardson's team won the National Invitational Tournament in 1981, the University of Tulsa has climbed to the NCAA tournament's sweet sixteen three times and to the final eight in 2000. Former Tulsa coaches have left to have stellar careers in college basketball. Richardson went on to have powerhouses at Arkansas, Tubby Smith coached at one of the Meccas of college hoops, Kentucky, and Bill Self became coach of a final-four team at Illinois. Self had played at Oklahoma State and became an OSU assistant before taking the head coaching job at Oral Roberts University, the state's only other NCAA Division I school at the end of the twentieth century, and from there he went to Tulsa. Oral Roberts University began playing NCAA basketball in 1965 and made it to the elite eight of the NCAA tournament in 1974.

Sponsored by the Oklahoma City newspaper, the Daily Oklahoman, since 1935, the All College Tournament is the nation's oldest holiday basketball tournament. Many great players have been a part of it, including Bill Russell, Elgin Baylor, Pete Maravich, and Karl Malone.

Small-college basketball in Oklahoma has been exceptional. Using primarily Oklahoma talent, the NAIA and NCAA Division II schools have consistently been winners. The Southern Nazarene women's team won five national championships from 1989 to 1998, with four of those consecutively in 1994, 1995, 1996, and 1997. The Oklahoma City University women won the NAIA crown in 1999, 2000, and 2001. Oklahoma City University men's basketball has also been consistently good. Abe Lemons coached OCU basketball for twenty-five years (1955–73, 1983–90) and had 599 career wins (including his time at the University of Texas and Pan-American University). OCU dropped from NCAA I basketball to NAIA when Lemons began his second stint, but the school won four NAIA National Championships in the 1990s, developing great rivalries with Oklahoma Christian College (now Oklahoma Christian University of the Sciences and Arts) and Oklahoma Baptist University. An assistant to Lemons for eighteen years, Paul Hanson coached at the University of Science and Arts of Oklahoma (USAO) for five years after being head coach at OCU (1973–79) and at OSU (1979–86). He led USAO to the district play-offs twice and to the semifinals in 1990. Oklahoma's small-college tradition has an excellent reputation, and the other colleges, as well as junior colleges not mentioned here, have all had competitive teams and many championships.

Before the NBA paid enormous salaries to basketball players, the Amateur Athletic Union (AAU) sanctioned teams fielded by companies such as Phillips Petroleum. The Phillips 66ers were an AAU dynasty, winning six straight national amateur championships (1943–48) and eight overall. Phillips Petroleum, started in 1917, organized its first basketball team in 1921. Its first star was Paul Endacott, who was the AAU player of the year for Kansas University in 1923. The 66ers attracted top talent, and in 1946 former Oklahoma A&M star Bob Kurland joined the team. In 1948 five Phillips players played on the gold-medal–winning U.S. Olympic team coached by 66ers coach Bud Browning. The 66ers era ended in 1968 as professional basketball's popularity soared. Four ex-66ers have served as Phillips Petroleum board chair, and the team contributed as an advertising gem for over forty years. Different women's AAU programs, the Presbyterian College Cardinals (Durant) and the Tulsa Business School Stenos, won five straight titles in the 1930s.

In 1988 the Fast Breakers, Tulsa's first professional basketball team, played its inaugural season and won the Continental Basketball League (CBA) championship. In 1990 the Oklahoma City Cavalry joined Tulsa in the CBA, a developmental association for the NBA. The Fast Breakers left Tulsa in 1992, and the Cavalry developed financial problems and left Oklahoma City in 1997 after winning the championship. The Enid Storm joined the United States Basketball League in 2000 and at the end of the twentieth century was the state's only professional basketball team.

Although football and to some extent baseball have been touted as the sports of Oklahoma, basketball has a strong, rich tradition. The influence of Henry Iba and Bertha Teague on the sport's national scene is largely underestimated. While not recognized nationally like Indiana or North Carolina, Oklahoma basketball remains one of the state's most important sports.

The following (as per The Chicago Manual of Style, 17th edition) is the preferred citation for articles:
Larry O'Dell, “Basketball,” The Encyclopedia of Oklahoma History and Culture, https://www.okhistory.org/publications/enc/entry?entry=BA033.