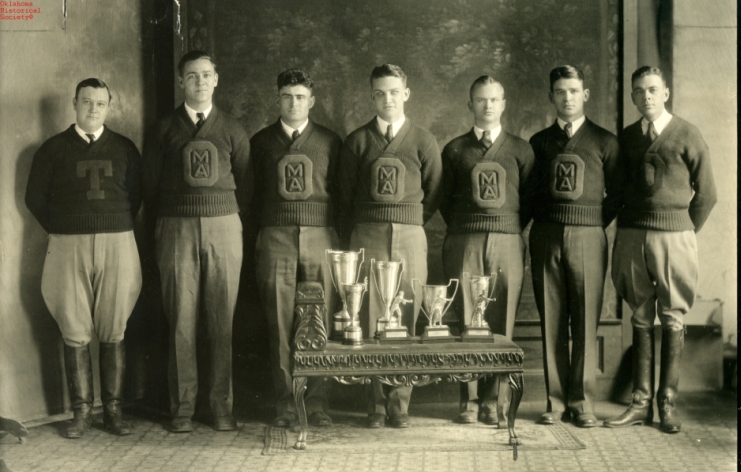 It was a misdemeanor to engage in a prizefight in Oklahoma prior to July 17, 1959. On that date Gov. J. Howard Edmondson signed a bill that legalized the sport of boxing in the Sooner State. The Oklahoma Territorial Legislature had declared in 1890 that pugilism was "a crime against the public peace" and rejected a bill to legalize boxing in 1895. Although Gov. Lee Cruce used the Oklahoma National Guard to enforce the state's prizefighting law, Oklahoma's antiboxing legislation was unpopular and so was ignored.

Amateur boxing flourished in Oklahoma between 1927 and 1958. Oklahoma's first Amateur Athletic Union (AAU) tournament was held in 1930, and the state Golden Gloves tournament debuted in 1936. The latter was held annually in Oklahoma City until relocated to Tulsa in 1954. An estimated twenty thousand spectators attended the event in 1946, and boxers from forty-nine communities competed in the 1949 tournament.

On August 7, 1976, the Oklahoma Athletic Hall of Fame honored eighty of the state's top professional and amateur boxers. Among them were Babe Hunt, Carl Morris, Brad Simmons, George Courtney, Eugene "Chief" Parris, and Marvin Liddell. Along with champions O'Grady, Morrison, and Rouse, Tulsa's James "Quick" Tillis and Muskogee native Buck "Tombstone" Smith should also be recognized. Tillis fought for the world heavyweight championship in 1981 and in 1986 became the first opponent to go the distance with an up-and-coming Mike Tyson. Smith won 179 professional bouts as a junior middleweight during a career that lasted from 1987 until 2000.

Boxing's future in Oklahoma has remained promising. Canceled after the 1958 season, Golden Gloves competition returned to Oklahoma City in 1987. In 2001 Oklahoman Tony Holden emerged as a nationally prominent promoter, and his Oklahoma shows were featured on network television. Due to the efforts of state boxing administrator Steve Bashore, Oklahoma was one of the nation's most active professional boxing states in 2002.

The following (as per The Chicago Manual of Style, 17th edition) is the preferred citation for articles:
Jon D. May, “Boxing,” The Encyclopedia of Oklahoma History and Culture, https://www.okhistory.org/publications/enc/entry?entry=BO029.