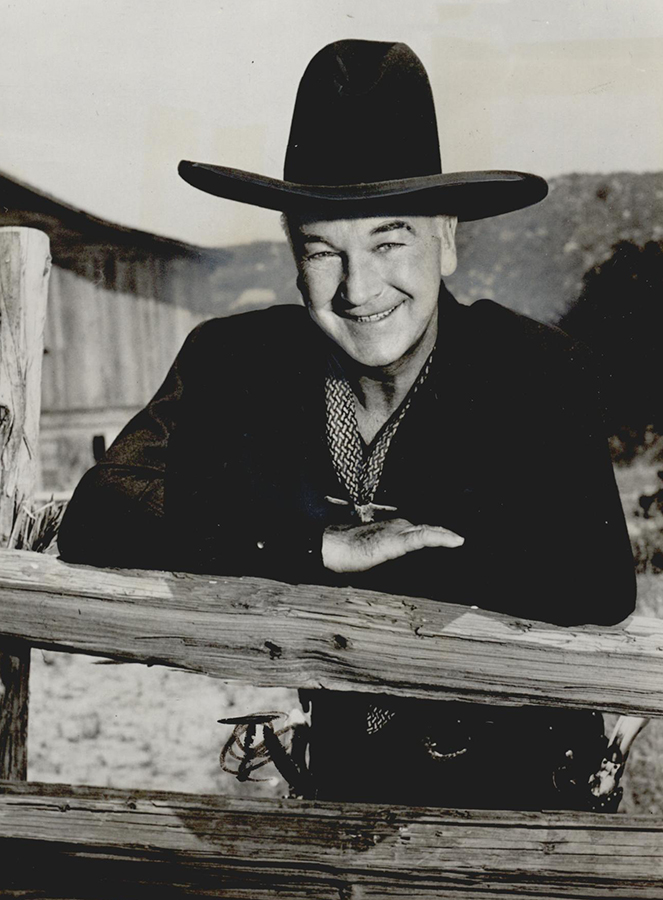 An actor known for his film character, "Hopalong Cassidy," William Lawrence Boyd was born June 5, 1895, in Hendrysburg, Ohio. He was the second of four sons of farm laborer Charles Boyd, who brought his family to Tulsa, Creek Nation, Indian Territory, in 1906. In 1913, while working for the Tulsa Water Department, Charles Boyd was killed when a twenty-inch cap blew off the line and broke his neck.

It has been reported, but never verified, that Bill Boyd attended Lincoln Grade School and Tulsa Central High School. In 1914 he moved with his grandmother to Orange, California, and then to San Diego. In 1917 he married Laura Maynard, a wealthy society lady from Boston and fifteen years his senior. He soon left her and went to Flagstaff, Arizona. A six-foot-tall, prematurely white-haired, handsome, rugged young man who easily attracted women, he decided to go to Hollywood to be an actor.

In Hollywood he accepted bit parts and became a favorite of Cecil B. DeMille. Boyd started in 1918 in Old Wives for New, possibly a prophetic movie, for he married and divorced actresses Ruth Miller, Elinor Fair, and Dorothy Sebastian. Becoming a major box office attraction, he starred in such silent hits as The Volga Boatman (1926) and The King of Kings (1927). His mature, warm voice evoked a natural sense of kindness, compassion, strength, confidence, and control and easily made transition to "talking pictures." However, his private life created the reputation that he was a partying Hollywood playboy and almost ruined his career.

His last major role for a few years was in Painted Desert (1931) in which Clark Gable made his movie debut, but in 1935 Boyd's friend Harry "Pop" Sherman offered him a role in a "Hop-a-long Cassidy" film. That Western hero had been created by Clarence Mulford, a Brooklyn, New York, clerk who had only visited the West one time and had hated it. Writing the memoirs and experiences of others, he had created one of our most enduring Western heroes. In 1907 Mulford's novel Bar 20 mentioned a minor character called Hopalong Cassidy; Mulford's 1910 book, Hopalong Cassidy, started the Cassidy saga, but Boyd's portrayal created the Hoppy mystique. Mulford's Cassidy was a rough, red-haired cowboy who limped from a bullet wound, drank, cursed, smoked, and gambled but had strong ethics and values.

In 1935 studio officials conceded that Mulford's Cassidy could not be portrayed to young people as a hero. Boyd supported that belief and developed the role of a cowboy who epitomized clean living. With this philosophy adopted in Boyd's personal life, he lost his old identity and became Hopalong Cassidy. In 1938 he wed singer-dancer Grace Bradley; the marriage lasted thirty-five years. From 1935 to 1943 he and his horse Topper made fifty-four Hopalong Cassidy movies for Sherman; he then produced twelve more on his own, for a total of sixty-six. In the late 1940s as television became popular, Hopalong Cassidy became its first cowboy hero series; Boyd made 106 television shows and 104 radio shows. Hopalong Cassidy reigned as one of the most popular children's Western heroes of the twentieth century, and Boyd became the "King of Cowboy Merchandisers." He endorsed over two thousand items from lunch boxes to bedroom furniture for young people, far more than either Gene Autry or Roy Rogers, and remains one of the most popular figures among memorabilia collectors.

In 1952 William "Hoppy" Boyd made his last filmed appearance as Hopalong Cassidy in DeMille's The Greatest Show on Earth. He made many trips to Tulsa not only to promote his activities, but also to visit childhood friends and his older brother Clarence, who lived there until his death in 1968. In the late 1960s experiencing health problems, Boyd avoided publicity and refused to be photographed, for he did not want his fans to see their childhood hero as an older, sick man. William L. "Hopalong Cassidy" Boyd died September 13, 1972, from a combination of Parkinson's disease and congestive heart failure.

The following (as per The Chicago Manual of Style, 17th edition) is the preferred citation for articles:
Guy Logsdon, “Boyd, William Lawrence,” The Encyclopedia of Oklahoma History and Culture, https://www.okhistory.org/publications/enc/entry.php?entry=BO031.