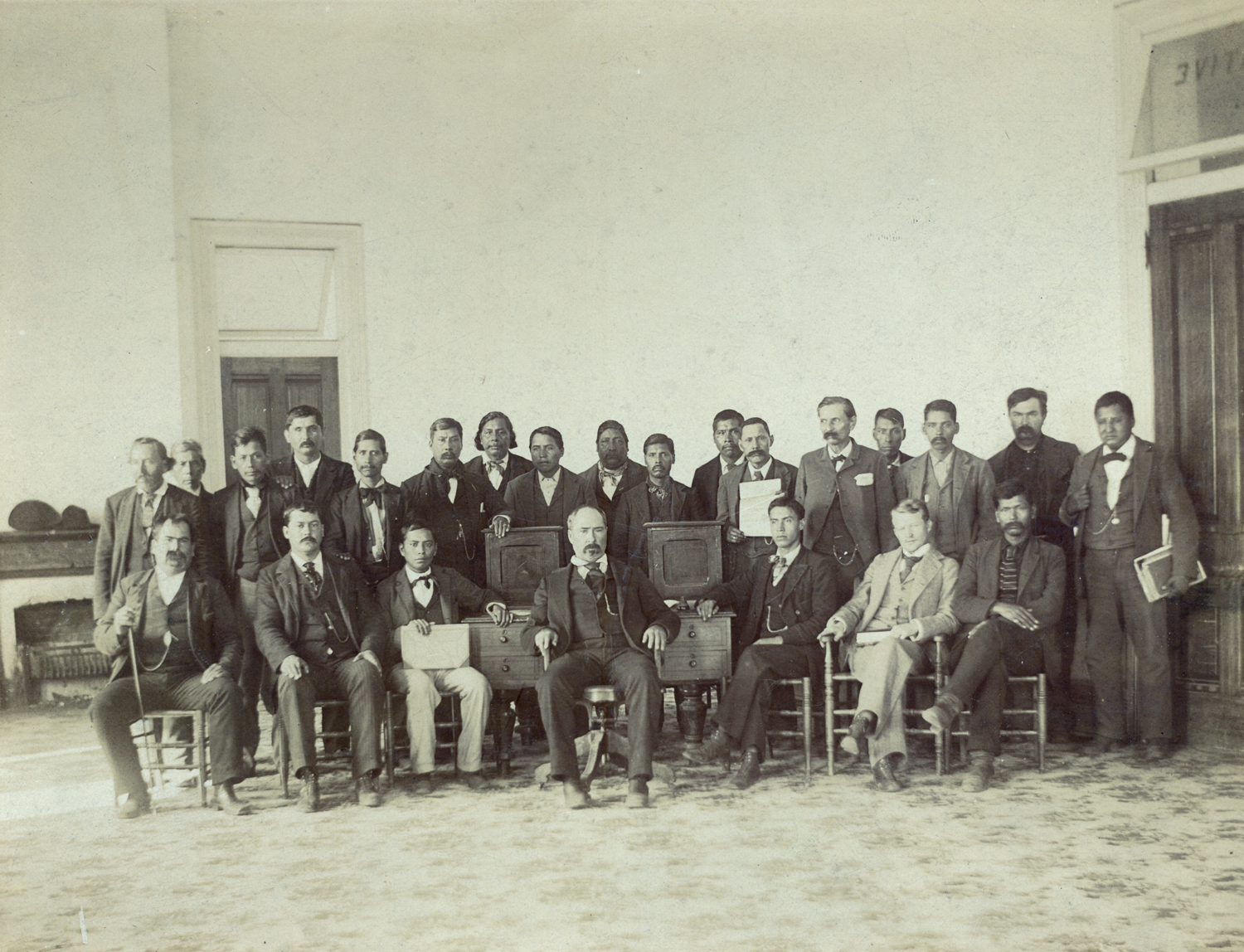 The history of the Choctaw Nation in Oklahoma began in 1820 when tribal leaders in central Mississippi signed the Treaty of Doak's Stand, ceding rich cotton lands in the delta region east of the Mississippi River for approximately thirteen million acres in the Canadian, Kiamichi, Arkansas, and Red River watersheds in southeastern Oklahoma. Although some families moved into the new land, the majority did not until Andrew Jackson pushed his Indian Removal Act through Congress in 1830. In that year Choctaw leaders signed the Dancing Rabbit Creek, ceding their remaining territory in Mississippi and agreeing to move west. During the fall and winter of 1831–32, more than six thousand Choctaw arrived in what was soon to be known as "the Indian Territory." They settled primarily around Boggy Depot in the western part of their new lands, Doaksville in the southeast, and Skullyville in the northeast. During 1832 and 1833 about five thousand more Choctaw arrived.

Citizens of each of the three traditional districts of the nation east of the Mississippi River generally stayed together in the west. As they organized their new government, they retained the old district names Moshulatubbee (northeast), Pushmataha (southwest), and Apukshunnubbee (southeast). Their settlement patterns differed from life in the east primarily in that they did not maintain compact villages but settled on more widely separated farms. The towns of Doaksville, Skullyville, and Boggy Depot were mainly commercial centers with U.S. post offices, blacksmith shops, and commercial stores.

Although the removal had been costly in terms of loss of life, the Choctaw reestablished their government by adopting a new constitution in 1838. The document was necessary, as they had agreed to lease the westernmost part of their land to the Chickasaw Nation, whose removal treaty allowed them to select their own new homeland. The new Choctaw constitution created for the Chickasaw a fourth district and also followed the existing division of powers within the nation. Chiefs of the three districts formed an executive branch, a representative council formed a legislative branch, and courts formed a judicial branch. A "lighthorse" or military unit enforced the laws.

In 1842 the Choctaw Nation adopted a new constitution that instituted a bicameral legislature. In that same year the nation took control of the schools that had been established under the auspices of the American Board of Commissioners for Foreign Missions (ABCFM) and the Methodist Episcopal Church. Missionaries who had worked in the old nation followed their parishioners west. The council itself operated Spencer Academy near Doaksville as a training ground for young men who were expected to become leaders of the tribe. The nation also valued education for women and supported the Chuwalla (Chuwahla) Female Seminary at Pine Ridge in Puckshanubbee District, the Kunsha (Kunaha or Koonaha) Female Seminary at Goodwater, on the east side of the Boggy River in Pushamattahaw district, Ayannubbee (Ianubbe) Female Seminary near Eagletown, and Wheelock Academy. The Methodist Episcopal Church was given charge of boys' and girls' schools at Fort Coffee in Moshulatubbee district and Nanawaiya Academy near the nation's Council House (west of present Tuskahoma). Funding for these institutions came from annuity payments for land ceded in an 1825 treaty.

By the 1850s the population of the Choctaw Nation was a mix of people. Some retained old customs, such as traditional marriages, or ritual courtship, in which a young man pursued a young woman, and she indicated her willingness or unwillingness to be caught. By 1855 there were eleven Christian churches, with a combined membership of 1,094, and in 1860 the ABCFM reported twelve, with a membership of 1,362. Choctaw law provided that "no person who denies the being of a God, or a future state of rewards and punishments, shall hold any office in the civil department of this nation nor shall he be allowed his oath in any court of justice." Despite Christian influence, traditional Choctaw stickball games were still played. Traditional customs of hospitality still persisted in the sharing of food, and kinship terminology emphasized descent through the mother's line.

The 1850s also brought new influences into the nation. These were embodied in railroad development, in new economic activity generated by the Net Proceeds Case, which had been initiated by Peter Pitchlynn to recover the proceeds of the sale of Choctaw lands east of the Mississippi, and in the final separation of the Choctaw and Chickasaw governments. The Chickasaw Nation leaders were increasingly restive in their status as a division of the Choctaw government, and the boundary line between their respective territories was still at issue. At this same time the U.S. government was looking for land upon which to settle hostile Plains tribes under its reservation policy. A treaty in 1855 satisfied these several concerns. The Chickasaw gained political independence, although the Choctaw and Chickasaw land base remained jointly owned. Railroad rights-of-way through these lands were guaranteed, the federal government agreed to the Net Proceeds claim, and the Choctaw and Chickasaw Nations leased the land west of the 98th Meridian to the federal government for the settlement of western tribes.

In the pre–Civil War years slavery was an overriding issue. The American Board of Commissioners for Foreign Missions rejected slavery unequivocally, but the missionaries themselves, some of whom had labored among the Choctaws since 1818, realized that they lived in a nation with many leaders who embraced the institution. In 1859 the missionaries gave up their affiliation with the ABCFM and joined the Presbyterian denomination.

The Choctaw Nation signed a treaty with the Confederate government in 1861. Because of the number of slaveholders among its leadership, the Choctaw people were the most strongly committed of the Indian Territory's nations to the Southern cause. The Confederacy's fall meant, however, that the Five Tribes were forced to negotiate new treaties with the U.S. government. As defeated nations, they were forced to cede territory and to accede to the United States' demands for expanded railroad rights-of-way across Indian lands. The federal government also forced them to sell their western lands. During the course of the negotiations for these treaties, however, Choctaw Chief Allen Wright suggested that the name "Oklahoma" be used for a territory that was being proposed for the tribes residing within the region.

The result of the Civil War was to undermine tribal governments. The conflict opened Indian Territory to exploitation by railroads and non-Indian ranchers, coal miners, and commercial entrepreneurs. Although the Choctaw Nation had tried to regulate the activities of non-Indians by imposing fees and licenses, and also in the 1870s to regulate marriage between tribal citizens and non-Indians, the nation was quickly overwhelmed by noncitizens.

The late-nineteenth-century federal policy of Indian assimilation, embodied in the General Allotment Act (the Dawes Severalty Act) in 1887, was imposed upon the Choctaw Nation in the Curtis Act in 1898. This latter legislation, which abolished tribal courts and was intended to hasten the demise of tribal governments, also codified the text of an agreement that the Choctaw and Chickasaw Nations had signed in 1897 with the Dawes Commission at Atoka. The Atoka Agreement implemented allotment, but it also set aside the coal and asphalt deposits in the northern part of the Choctaw Nation as communal assets for tribe members. In 1902 the Choctaw and Chickasaw signed a supplement to the Atoka Agreement in order to expedite the allotment process and facilitate implementation of the Curtis Act.

Soon after the Curtis Act became law, the Five Tribes mounted a final political effort to forestall dissolution of their governments. In 1905 their representatives met in the Sequoyah Convention to propose the creation of an Indian state that would be admitted to the Union. Although the move failed, the Sequoyah Convention became a model for the Oklahoma Constitutional Convention. In 1906 Congress passed the final law determining the dissolution of the governments of the Five Tribes in Indian Territory.

The 1902 supplement to the Atoka Agreement, however, maintained the Choctaws' communal coal and asphalt holdings as communal property. These "segregated coal lands" were supposed to be sold by the U.S. government in order to provide the tribe with income. Because the coal lands were not sold in the post-statehood period, a Choctaw government continued to exist, and it struggled to protect these resources. Some tribe members wanted a per capita distribution of the land and its minerals. The federal government, however, sold thirty-year leases to mining companies, hoping that coal prices might rise. In 1942, during World War II, the minerals became valuable for the war industries, and hearings ensued to debate whether the government should continue the leases, with their ongoing income for Choctaws, or liquidate the tribal estate. In 1948 the U.S. government itself purchased most of the coal lands from the Choctaw Nation for $8.5 million. In the 1950s the U.S. government pursued a policy of terminating the special relationship between itself and the Indian tribes. This led to an initiative in 1959 by the appointed Choctaw Nation chief to put the remaining portion of the tribe's mineral holdings into a private trust. That would terminate the federal relationship and give half of the income to be liquidated for a per capita payment.

Growing national Indian activism in the 1960s led to repeal of the termination legislation. Afterward, local initiatives funded by federal War on Poverty programs gave rise to a resurgence of Choctaw national identity. In 1971 the U.S. Congress restored the rights of the Five Tribes to hold popular elections for their chiefs. In June 1984 the Choctaws also adopted a new constitution with a balance of powers among executive, legislative, and judicial branches.

At the beginning of the twenty-first century the Choctaw Nation derived income from gaming operations (bingo and pari-mutuel wagering on horse racing), manufacturing, and personnel management services for federal agencies. The total tribal enrollment stood at approximately 127,000 members. The Choctaw Nation headquarters were maintained in Durant, Oklahoma. Cultural revitalization activities included Choctaw language classes offered via the Internet and an annual Choctaw Labor Day celebration including both popular country music singers and religious services with singing of Choctaw hymns. The Choctaw Nation has achieved economic success while preserving its history and promoting elements of its culture.

John Edwards, "The Choctaw Indians in the Middle of the Nineteenth Century," The Chronicles of Oklahoma 10 (September 1932).

The following (as per The Chicago Manual of Style, 17th edition) is the preferred citation for articles:
Clara Sue Kidwell, “Choctaw (tribe),” The Encyclopedia of Oklahoma History and Culture, https://www.okhistory.org/publications/enc/entry?entry=CH047.