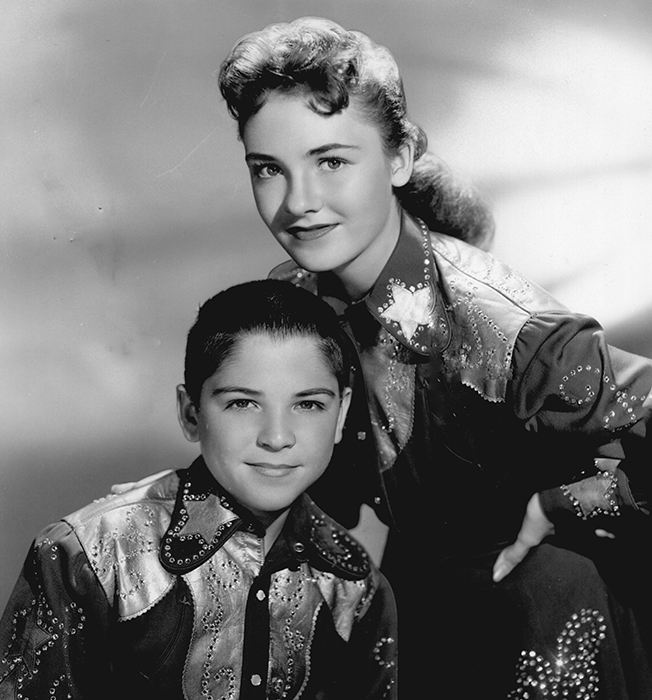 Larry and Lorrie Collins were among the most influential rockabilly acts of the 1950s. Lawrencine May Collins (1942–2018) and Lawrence Albert Collins(1944– ) were raised on a dairy farm and attended a one-room school near Tahlequah, Oklahoma.

At the age of eight Lorrie won a talent contest in Tulsa hosted by Western swing steel guitarist Leon McAuliffe. McAuliffe encouraged Lorrie's parents to relocate to California to develop her talents, which they did in 1953. In the meantime, Larry mastered the guitar, with tutelage from the legendary guitarist Joe Maphis. After winning several talent contests, the Collins Kids landed a regular spot on the Town Hall Party in 1954, owning a major radio and television contract before they were teenagers. Approximately one year later they recorded their first releases for Columbia, "Hush Money" and "Beetle Bug Bop."

During their tenure with Columbia from 1955 to 1959 they were showcased in their "hopped-up hillbilly" style with such releases as "Whistle Bait," "Hot Rod," "Soda Poppin' Around," and "In My Teens," all of which spoke directly to the teen generation of the fifties. Lorrie and teen heartthrob Ricky Nelson dated during the 1950s. Lorrie appeared on The Adventures of Ozzie and Harriet as Ricky's girlfriend, and the couple sang the Collins Kids' version of "Just Because" on one episode. The romance cooled, however, and Lorrie eventually married Stu Carnall, road manager for Johnny Cash, with whom the Collins Kids toured.

The Collins Kids' popularity resulted in appearances on the Steve Allen Show, the Ozark Jubilee, and the Grand Ole Opry. Dissolving their act in 1961 after the birth of Lorrie's first child, Larry continued to write music. He is best known as co-composer of "Delta Dawn" (1972) and "You're the Reason God Made Oklahoma" (1981). Several of the Collins's recordings have been reissued in the United States and Europe, and the two reunited for occasional appearances, especially in Europe, where they remain popular. Lorrie Collins died in Reno, Nevada, on August 4, 2018.

The following (as per The Chicago Manual of Style, 17th edition) is the preferred citation for articles:
George O. Carney, “Collins Kids,” The Encyclopedia of Oklahoma History and Culture, https://www.okhistory.org/publications/enc/entry.php?entry=CO028.