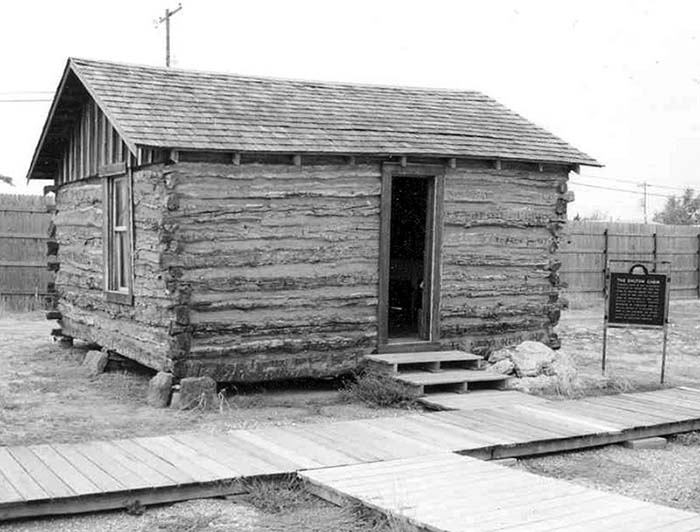 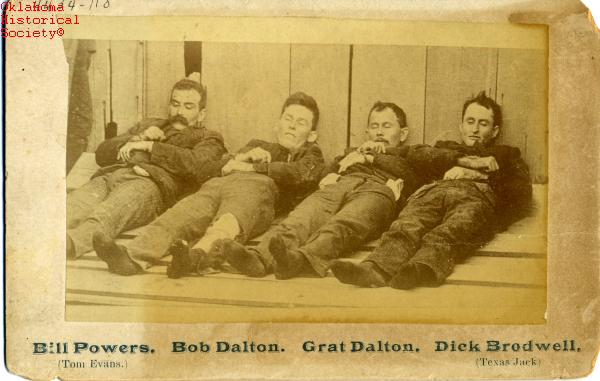 Frank Dalton served as a deputy U.S. marshal for the Federal District Court of Western Arkansas at Fort Smith from 1884 until horse thieves and whiskey peddlers killed him on November 27, 1887. He was a good, efficient officer and highly respected by other lawmen.

Grat and Bob Dalton pinned on badges shortly after Frank's death and served as deputy U.S. marshals for the federal courts at Wichita, Kansas, and Fort Smith. Emmett often rode as a guard or posseman for his brothers. In 1890 charges for stealing horses were lodged against Grat; however, after a hearing he was released. About the same time, Bob was charged with introducing whiskey into Indian Territory. A hearing resulted in a true bill against him.

Grat, Bob, and Emmett then left Oklahoma and joined older brothers living and working in California. In February 1891 Bill, Grat, Bob, and Emmett were accused of robbing a Southern Pacific train at Alila, California. Grat and Bill were arrested. Bob and Emmett returned to Oklahoma and formed the Dalton Gang. Grat was found guilty at his trial, although over a dozen eyewitnesses placed him in a hotel in Fresno at the time of the robbery. Bill was also tried but promptly acquitted. Grat escaped from jail in September 1891 while awaiting sentencing. He later joined his brothers in Oklahoma. In the meantime, Bob and Emmett collected several friends: George Newcomb, Charley Bryant, Bill Powers, Charley Pierce, Dick Broadwell, William McElhanie, and Bill Doolin, and began to rob trains in present Oklahoma. They robbed four: the Santa Fe at Wharton, May 9, 1891; the Katy (Missouri, Kansas and Texas) at Leliaetta, September 15, 1891; the Santa Fe at Red Rock, June 1, 1892; and the Katy at Adair, July 14, 1892.

For one reason or another the gang pared down to five members. On October 5, 1892, Bob, Grat, and Emmett Dalton, Bill Powers, and Dick Broadwell attempted to rob two banks at the same time in Coffeyville, Kansas. Four of the gang were shot and killed, and Emmett was badly wounded. Four Coffeyville townsmen were also killed: City Marshal Charles T. Connelly, Lucius Baldwin, George Cubine, and Charles Brown. Emmett, sentenced to life in prison, became a model prisoner and was pardoned by the Kansas governor after serving fourteen and a half years. After he was released, he made and acted in a few movies, wrote two books about his outlaw days, and became active in the construction and real estate business near Los Angeles, California.

After the Coffeyville raid, Bill Dalton supposedly joined the Doolin gang. He was reportedly a participant in a gun battle at Ingalls, Oklahoma Territory, on September 1, 1893, where the Doolin gang killed three deputy U.S. marshals. He might also have been a member of a four-man gang that robbed the First National Bank of Longview, Texas, on May 21, 1894. Bill was shot and killed by a posse near Ardmore on June 8, 1894. All nine of the deputy U.S. marshals who killed Bill Dalton were indicted for his murder in the federal court at Ardmore in June 1896. Apparently, none of them were ever tried. Why they were indicted remains a mystery to this day.

Lue Diver Barndollar, What Really Happened on October 5, 1892: An Attempt at an Accurate Account of The Dalton Gang and Coffeyville (Coffeyville, Kans.: Coffeyville Historical Society, 1992).

The following (as per The Chicago Manual of Style, 17th edition) is the preferred citation for articles:
Nancy B. Samuelson, “Dalton Gang,” The Encyclopedia of Oklahoma History and Culture, https://www.okhistory.org/publications/enc/entry.php?entry=DA006.