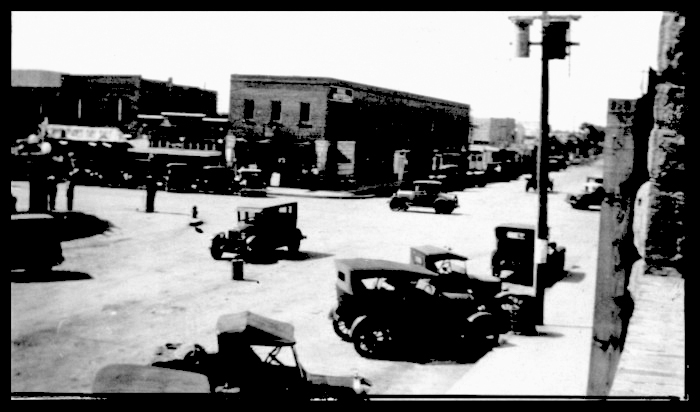 Located in Pottawatomie County, Earlsboro is situated at the intersection of U.S. Highway 270 and State Highway 9A. Earlsboro is named for James Earls, a local African American barber who had been an orderly for Confederate Gen. Joseph "Joe" Wheeler. The town plat identified the town's name as Earlsborough. However, it was changed to Earlsboro when the post office opened on June 12, 1895. In 1891 the Choctaw Coal and Railway (later the Choctaw, Oklahoma and Gulf Railroad) extended its line west from the Seminole Nation, and the town was formed in Oklahoma Territory, one-half mile from Indian Territory (I.T.). The town has had two significant booms. In 1959 the Daily Oklahoman reported that Earlsboro "was the town that whisky built and oil broke." As liquor was illegal in I.T., whisky fueled Earlsboro's first boom.

The town's first three businesses were saloons, and the close proximity to I.T. attracted many customers and merchants. Local historian Joy Mize recounts tales of a "wild whisky town, and murders and street fights were common." Despite its violent nature, Earlsboro prospered. The citizens established a blacksmith shop, cotton gins, a school district, and churches. By 1905 the population reached an estimated five hundred, and approximately 90 percent of the merchants profited from liquor sales. After 1907 statehood and prohibition Earlsboro's population stood at 387, and the economy declined. Lacking profits from whisky, consumers and merchants soon left. However, the agricultural settlers, who supported the cotton gins and new businesses, kept the town alive. The Border Signal and other newspapers kept citizens informed.

On March 1, 1926, black gold was struck at 3,557 feet, resulting in a well that produced daily two hundred barrels. Word of the strike spread quickly, and oil derricks soon dotted the landscape. Within two months Earlsboro's population soared to an estimated ten thousand. Twenty-five-foot lots sold for as much as ten thousand dollars. The town sported a one-hundred-thousand-dollar hotel "admired as Oklahoma's fanciest," a grand theater boasting one thousand seats, twenty-three lumberyards, forty-one gasoline stations, twenty-four grocery stores, and many other businesses.

Earlsboro experienced the infamy of Charles A. "Pretty Boy" Floyd, who robbed the town's bank and occasionally visited, because his partner George Birdwell's mother lived there. National Baseball of Fame member Wilver "Willie" Stargell was born in Earlsboro in 1940. Ernest McFarland, born in Earlsboro, served as U.S. senator from Arizona from 1941 to 1953 and as Arizona's governor from 1955 to 1959.

Bankruptcy finalized Earlsboro's legacy. In 1929 citizens passed a $225,000 bond issue for a water and sewer works. Three years later prosperity ended when oil production declined. Leaving behind a glorious era and a mountain of debt, speculators and settlers moved. Families deserted their homes, and the hotel met its demise. Earlsboro's population continued to decline after it peaked at 1,950 in 1930. Despite the fact that the bond debt could not be paid twenty years later, Earlsboro remained a productive rural community. Supported by a strong rural water district and the main offices of the Pottawatomie Telephone Company, Earlsboro's economic health improved. At the turn of the twenty-first century three new businesses had formed, and the population had increased from 535 in 1990 to 633 in 2000 and held steady at 628 in 2010.

The following (as per The Chicago Manual of Style, 17th edition) is the preferred citation for articles:
Jeff Mize, “Earlsboro,” The Encyclopedia of Oklahoma History and Culture, https://www.okhistory.org/publications/enc/entry.php?entry=EA002.