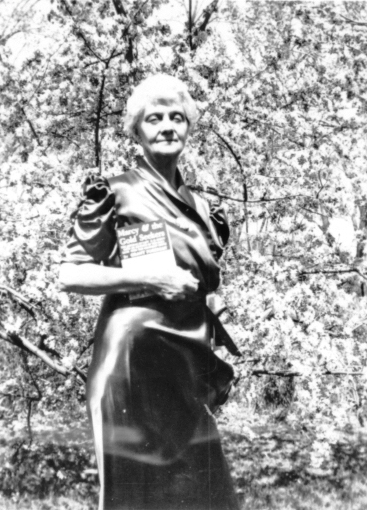 An Oklahoma historian, Carolyn Thomas Foreman, daughter of Charlotte "Lottie" Culver and John Robert Thomas, was born October 18, 1872, in Metropolis, Illinois. Educated in private and public schools in Washington, D.C., where her father served in the U.S. Congress, she received French and German lessons while the family lived in Belgium for one year. Thomas continued her education at her mother's alma mater, Monticello College, in Godfrey, Illinois.

In 1897 Pres. William McKinley appointed her father as federal judge, and the family moved to Muskogee, Indian Territory. On July 26, 1905, Carolyn Thomas married Grant Foreman, an attorney who worked in her father's law office and who had served on the Dawes Commission. Having no children, they traveled extensively, researching in libraries and repositories worldwide and accumulating books for their personal library. Their mutual interest in research and writing led to numerous publications on Oklahoma topics.

Initially, she assisted in her husband's research by taking notes and translating manuscripts written in French. Around 1930 Carolyn Foreman started researching and writing her seminal work, Oklahoma Imprints, 1835–1907: A History of Printing in Oklahoma Before Statehood (1936), which continues to serve as the reference work on Oklahoma newspapers. Her command of foreign languages facilitated her research that culminated in her second work, Indians Abroad: 1493–1938 (1943). She wrote six additional books and contributed articles to The Chronicles of Oklahoma as well as other journals.

Although Carolyn Foreman is remembered as a historian, she apparently was more proud of her work during World War I as director of women's work for the American Red Cross in Muskogee County. She suggested the ideas of producing a subject index to Oklahoma newspapers and of collecting reminiscences from Oklahoma's pioneers. Both suggestions came to fruition as WPA (Works Progress Administration) projects, the former as an index card file in the Research Division at the Oklahoma Historical Society and the latter known as the Indian-Pioneer History. She was a member of the Pen and Brush Club of New York and the National Society of Magna Charta Dames. Inducted into the Oklahoma Hall of Fame in 1938 and made an honorary life member of the Oklahoma Historical Society in 1959, Carolyn Foreman died at her home in Muskogee, Oklahoma, on February 18, 1967. The Thomas-Foreman Home in Muskogee was listed in the National Register of Historic Places in 1973 (NR 73001565).

The following (as per The Chicago Manual of Style, 17th edition) is the preferred citation for articles:
Linda D. Wilson, “Foreman, Carolyn Thomas,” The Encyclopedia of Oklahoma History and Culture, https://www.okhistory.org/publications/enc/entry.php?entry=FO019.