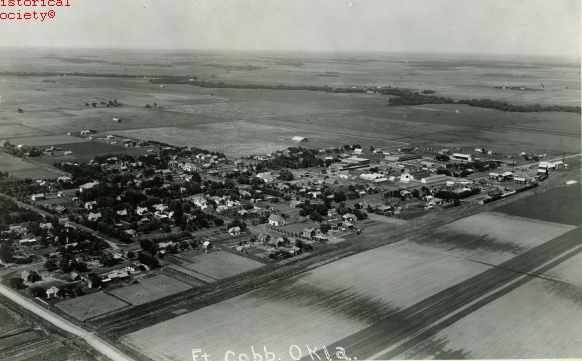 Fort Cobb is located in the southwestern portion of Caddo County on State Highway 9 near the Washita River. The town is just south of Fort Cobb State Park. Along State Highway 9, the community is fifteen miles west of Anadarko. The town of Fort Cobb was preceded by a military post of the same name that operated from 1859 to 1862 and briefly in 1868 before being supplanted by Fort Sill. The military post was located about a mile east of the existing community.

The town of Fort Cobb originated in 1899 under the name of Cobb. This was changed to Fort Cobb in 1902. Until the 1950s the community relied on agriculture for its economic well being. Located on the Chicago, Rock Island and Pacific Railway's branch line between Chickasha and Mangum, the town boasted two elevators and three cotton gins by the mid-1930s. Other enterprises in Fort Cobb at the time included two lumberyards, a broom factory, and ice plant. In 1958 construction work began on Fort Cobb Lake, greatly expanding the recreational opportunities in the community. With the designation of Fort Cobb State Park nearby, tourism has become one of the major economic forces for the town.

The Fort Cobb News has served the community since in 1958. Other newspapers have included the Caddo County Record, the Fort Cobb Express, and the Fort Cobb Record. At the beginning of the twenty-first century the form of city government was mayor-council.

The following (as per The Chicago Manual of Style, 17th edition) is the preferred citation for articles:
Cynthia Savage, “Fort Cobb (town),” The Encyclopedia of Oklahoma History and Culture, https://www.okhistory.org/publications/enc/entry.php?entry=FO030.