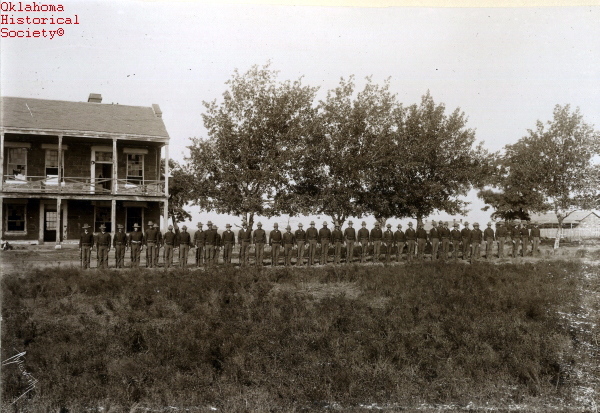 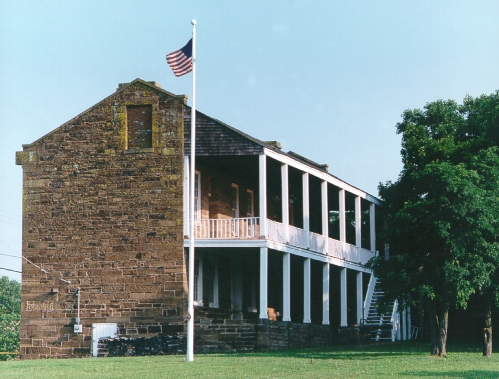 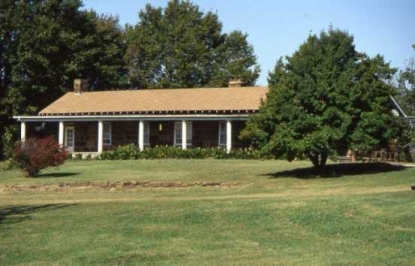 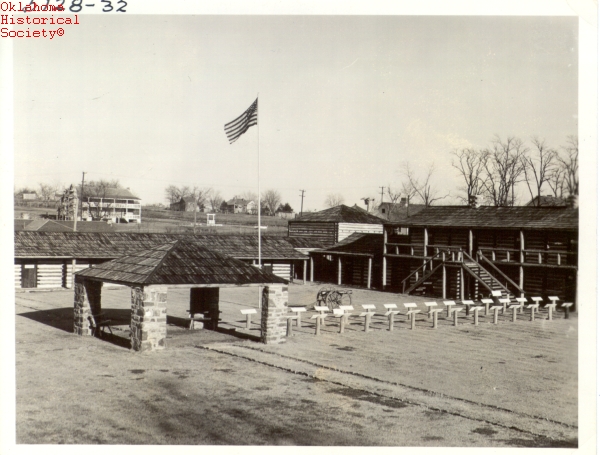 In 1824 Col. Matthew Arbuckle, commander of the Seventh Infantry, moved elements of his regiment from Fort Smith and established a military post on the east side of the Grand River, about a mile north of its confluence with the Arkansas River. The first U.S. military post in what would become the state of Oklahoma, the facility was originally called Cantonment Gibson, in honor of U.S. Army Commissary General George Gibson. Located farther west than any other existing U.S. post, it was built to protect the nation's southwestern border and to maintain peace on the frontier, particularly between the feuding Cherokee and Osage. Troops assigned to the post in the early years constructed a stockade, barracks, and other facilities and blazed roads in addition to their peace-keeping duties.

After passage of the Indian Removal Act of 1830, the facility, redesignated "Fort" Gibson in 1832, became increasingly involved in the removal of eastern tribes to Indian Territory. When immigrant Indians from the East complained about hostility from Plains Indian tribes and the Osages, federal officials created a commission chaired by Montfort Stokes, a former governor of North Carolina, to address the problems. The Stokes Commission convened at Fort Gibson, and troops at the post were ordered to support the commission's work.

Beginning in 1832 a series of expeditions from the post marched west in search of the nomadic southern Plains tribes. The first excursion failed to make contact, but its journey was documented in the journals of many of its members, including Washington Irving's A Tour on the Prairies. An expedition in 1833 also encountered no Plains Indians. The 1834 Dodge-Leavenworth dragoon expedition finally established contact and led to negotiation of the first treaty with the Indians of the southern plains, but enduring peace would not be established for more than thirty-five years. Although the expeditions to the plains did not provoke hostility from the tribes, many of the men who marched from the post were stricken by debilitating fevers, which produced high mortality. In fact, one West Point officer assigned to the post in the mid-1830s claimed that the men considered the expeditions to the plains to be almost a death sentence.

As larger numbers of eastern Indians relocated to Indian Territory, personnel assigned to the post were involved in building roads, provisioning immigrating bands, and maintaining peace between antagonistic factions of immigrating tribes. Just as the influx of eastern Indians began, most of the troops at Fort Gibson were sent to the Texas border area where Americans in Texas were rebelling against the Mexican government. The absence of these troops weakened government military power just as the danger of hostility increased.

Nonetheless, the reduced garrison was able to maintain stability in the region. A meeting at Fort Gibson in 1836 persuaded the majority faction of the Creeks to accept the government of the McIntosh element of the tribe, which had already established tribal government in the West. Despite bitter rivalry between the factions, bloodshed was avoided. The efforts of Colonel Arbuckle to prevent intratribal strife among the Cherokee failed when the followers of Chief John Ross refused to acknowledge the existing government, which had been established earlier by "the Old Settlers" in Indian Territory. Officials at Fort Gibson were more successful with the Seminole, who arrived bitter and dispirited after waging a war against the United States in Florida. When Colonel Arbuckle left Fort Gibson in 1841, he was able to report that despite the arrival of forty thousand eastern Indians, whose disposition was decidedly unfriendly, "I have maintained peace on this frontier and at no period have the Whites on our border or the Red people of this frontier been in a more perfect state of quiet and Security than they enjoy now."

After the immigrant Indians settled their new nations, the need for military protection declined. In the 1850s the Cherokee complained about the liquor and brothels at Fort Gibson and urged Congress to remove the post. Heeding the tribe's request, in June 1857 the War Department abandoned the post and deeded the property and improvements to the Cherokee, who established the village of Kee-too-wah on the site.

During the Civil War the Union briefly reoccupied the post because of the invasion of Indian Territory in summer 1862, but the site was abandoned when Union forces withdrew to Kansas. In April 1863 Col. William A. Phillips, commander of the Union Indian Brigade, reoccupied the post, and it remained in Federal hands until the end of the war. Briefly renamed Fort Blunt, in honor of Gen. James G. Blunt, commanding general of the District of Kansas, the post dominated the vital junction of the Texas (Military) Road and the Arkansas River. Although the Confederates never attacked the Union fort, its units played a key role in most of the military action in the conflict's final years. Troops from Fort Gibson marched south in July 1863 to win the engagement at Honey Springs, the war's largest and most important engagement in Indian Territory.

Fort Gibson remained a military post after the war, but in 1871 most troops were transferred, leaving only a detachment responsible for provisions in a quartermaster depot. Troops returned the next year, and the size of the garrison fluctuated in response to threats from outlaws, white encroachment, intratribal disputes, and other problems in the region. In summer 1890 the government again abandoned the facility, but troops would occasionally camp at the site when unrest required their presence in the area.

Because no battles or massacres occurred at or near the post, Fort Gibson never earned the reputation that some other frontier forts achieved, but for more than half a century it accomplished its mission of maintaining the peace. At the height of Indian removal, it had the largest garrison in the nation, and many notable Americans served there or passed through, including Stephen Watts Kearny, Henry Leavenworth, Jefferson Davis, and Zachary Taylor. Fort Gibson Historic District is listed in the National Register of Historic Places (NR 66000631) and has been designated a National Historic Landmark by the National Park Service.

The following (as per The Chicago Manual of Style, 17th edition) is the preferred citation for articles:
Brad Agnew, “Fort Gibson (fort),” The Encyclopedia of Oklahoma History and Culture, https://www.okhistory.org/publications/enc/entry.php?entry=FO033.