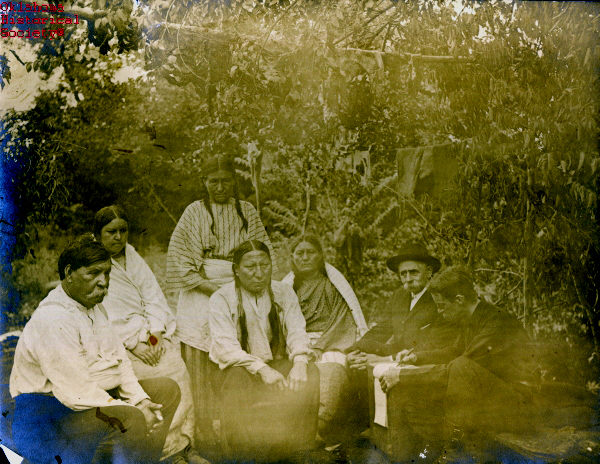 Alfred White (far right) of New York listening to the story of the Ghost Dance at the Seger Colony, 1901
(2415, Bessie Seger Collection, OHS).

A late-nineteenth-century American Indian spiritual movement, the ghost dance began in Nevada in 1889 when a Paiute named Wovoka (also known as Jack Wilson) prophesied the extinction of white people and the return of the old-time life and superiority of the Indians. Faithful dancing, clean living, peaceful adjustments with the whites, hard work, and following God's chosen leaders would hasten the resurrection of dead relatives and the restoration of days of Indian prosperity.

The ghost dance spread to the Great Plains in 1889 as a four-day round dance. Leaders waved eagle-wing fans before the faces of the dancers, inducing trances. In trance, the dancer would be transported to the afterworld where departed relatives were seen living the old, happy life of the prereservation era when bison abounded.

The first Oklahoma Territory ghost dance was held at Watonga in April 1890. Because the ghost dance emphasized traditional ways, many earlier dances were revived at that time. In September 1890 some three thousand Indians, virtually all of the Cheyenne, Arapaho, Kiowa, Wichita, Caddo, and Apache tribes, gathered on the South Canadian River and danced every night for two weeks.

After the massacre of ghost dancers in December 1890 at Wounded Knee, on the Pine Ridge Reservation in South Dakota, Commissioner of Indian Affairs Thomas J. Morgan visited Oklahoma Territory and, seeing no signs of violence as a result of the ghost dance, made no attempt to prohibit it. The ghost dance continued uninterrupted in Oklahoma until at least 1914.

During 1891 and 1892 the ghost dance spread to the Pawnee, Otoe-Missouria, Iowa, Osage, and Quapaw. Each tribe composed its own songs and adapted the dance in accordance with participants' own visions, reviving old-time clothing, weapons, dances, and hand games. Individuals from many tribes attended ghost dances. For example, in 1892 Commissioner of Indian Affairs Robert V. Belt sent a telegram to Anadarko saying, "Order visiting Cherokee engaged in Messiah dance to leave Kiowa reservation immediately. Tell them if they refuse troops will be sent to compel obedience."

Most important to Oklahoma's rich American Indian heritage was the stimulus this late-nineteenth-century religious movement provided to revive old traditions and to compose new music. This occurred at the very time when the disruptive move to reservation life could have caused the stultification of American Indian religion and culture and the demise of Native music.

Donald N. Brown, "The Ghost Dance Religion Among the Oklahoma Cheyenne," The Chronicles of Oklahoma 30 (Winter 1952–53).

The following (as per The Chicago Manual of Style, 17th edition) is the preferred citation for articles:
Gloria A. Young, “Ghost Dance,” The Encyclopedia of Oklahoma History and Culture, https://www.okhistory.org/publications/enc/entry.php?entry=GH001.