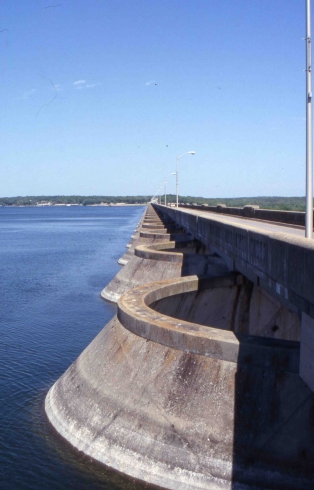 The Grand River Dam Authority (GRDA) is a state agency whose mission is to serve as a "conservation and reclamation district for the waters of the Grand River." It carries out this mandate by controlling and storing the river's waters and by generating waterpower and electrical energy "to use, distribute, and sell within the boundaries of the District." Hydroelectric projects on the Grand River began with the Pensacola Dam. Construction was initiated in 1938 and completed in 1941. The Grand River Dam, as it is also known, was the first hydroelectric facility built in Oklahoma and the longest multiple-arch dam in the United States. The dam stretches across the Grand River and creates the Lake O' The Cherokees (Grand Lake), a major recreational area with thirteen hundred miles of shoreline. The Robert S. Kerr Dam, originally named the Markham Ferry Project, is downstream from Pensacola, just north of Locust Grove. Constructed between 1958 and 1964, the Kerr Dam created Lake Hudson, a twelve-thousand-acre lake with two hundred miles of shoreline. Visitors to the Robert S. Kerr site will also find the Energy Control Center, home of the GRDA's System Operations Center. The third and final hydroelectric facility under the GRDA is the Salina Pumped Storage Project along the Saline Creek, southeast of Salina, Oklahoma.

If any one person can be identified as the "father" of the GRDA, it would be Cherokee tribal member Henry Holderman. Years before 1907 statehood, Holderman buttonholed any person who would listen to him about the wondrous benefits of flood control and electricity to be created by damming the Grand River. Three feasibility surveys resulted from Holderman's efforts: one accomplished by himself, one done by a private concern, and one prepared by the U.S. Army Corps of Engineers. The Corps of Engineers' report found an interested audience in the Oklahoma Legislature. Thereafter ensued a long, heated debate between legislators who wanted an electricity-producing entity modeled on the Tennessee Valley Authority (TVA) and legislators who spoke in opposition. Despite strong objections by private power companies such as Oklahoma Gas and Electric Company and Public Service Company of Oklahoma, and because of pressure from rural constituents, in April 1935 the legislature passed Senate Bill 395, an Enabling Act creating the Grand River Dam Authority (GRDA). Like the famous TVA, its function was to administrator a "conservation and reclamation district" that consisted of fourteen counties in northeastern Oklahoma. The legislation further granted authority to the GRDA to develop hydroelectric power and to control flooding along the Grand River.

While Holderman dedicated his life to a dream, W. R. Holway, founder and president of the Tulsa engineering firm W. R. Holway and Associates, made the dream a reality. A graduate of the Massachusetts Institute of Technology, he founded his company in 1922. The firm would also supervise construction of Tulsa's Spavinaw water supply project. Four months after the GRDA legislation went into effect, the first board of directors, consisting of nine men led by J. Howard Langley of Pryor as chair, held its first meeting. The GRDA hired Holway of Tulsa to serve as the chief engineer. In 1937, after several delays, Pres. Franklin D. Roosevelt gave his official approval. Federal Administration of Public Works Secretary Harold R. Ickes and the board of directors signed a contract in August 1937 for $11,563,000 as a loan and $8,437,000 as a grant to build the newly renamed Pensacola Dam. The GRDA, now assured of cash, issued its first in a series of revenue bonds that would eventually total $7 million. The Grand River Dam Authority began a major upgrade project in the fall 1997. At the turn of twenty-first century the three hydroelectric facilities as well as two coal-fired complexes had the capacity of generating 1,480 megawatts of electricity. A not-for-profit entity, the GRDA distributed wholesale electricity to twenty-four counties in eastern and northeastern Oklahoma. In early 2012 GRDA added wind energy to its portfolio by partnering with Canadian Hills Wind Power Project of western Oklahoma to acquire and distribute wind-generated electricity. By the end of that year GRDA power reached into seventy-five of the state's seventy-seven counties, serving sixteen municipalities and 23 member-owned rural electric cooperatives. The indirect or direct service reached 500,000 electric meters, and GRDA was the nation’s sixteenth-largest public power utility.

The following (as per The Chicago Manual of Style, 17th edition) is the preferred citation for articles:
Glen Roberson, “Grand River Dam Authority,” The Encyclopedia of Oklahoma History and Culture, https://www.okhistory.org/publications/enc/entry.php?entry=GR006.