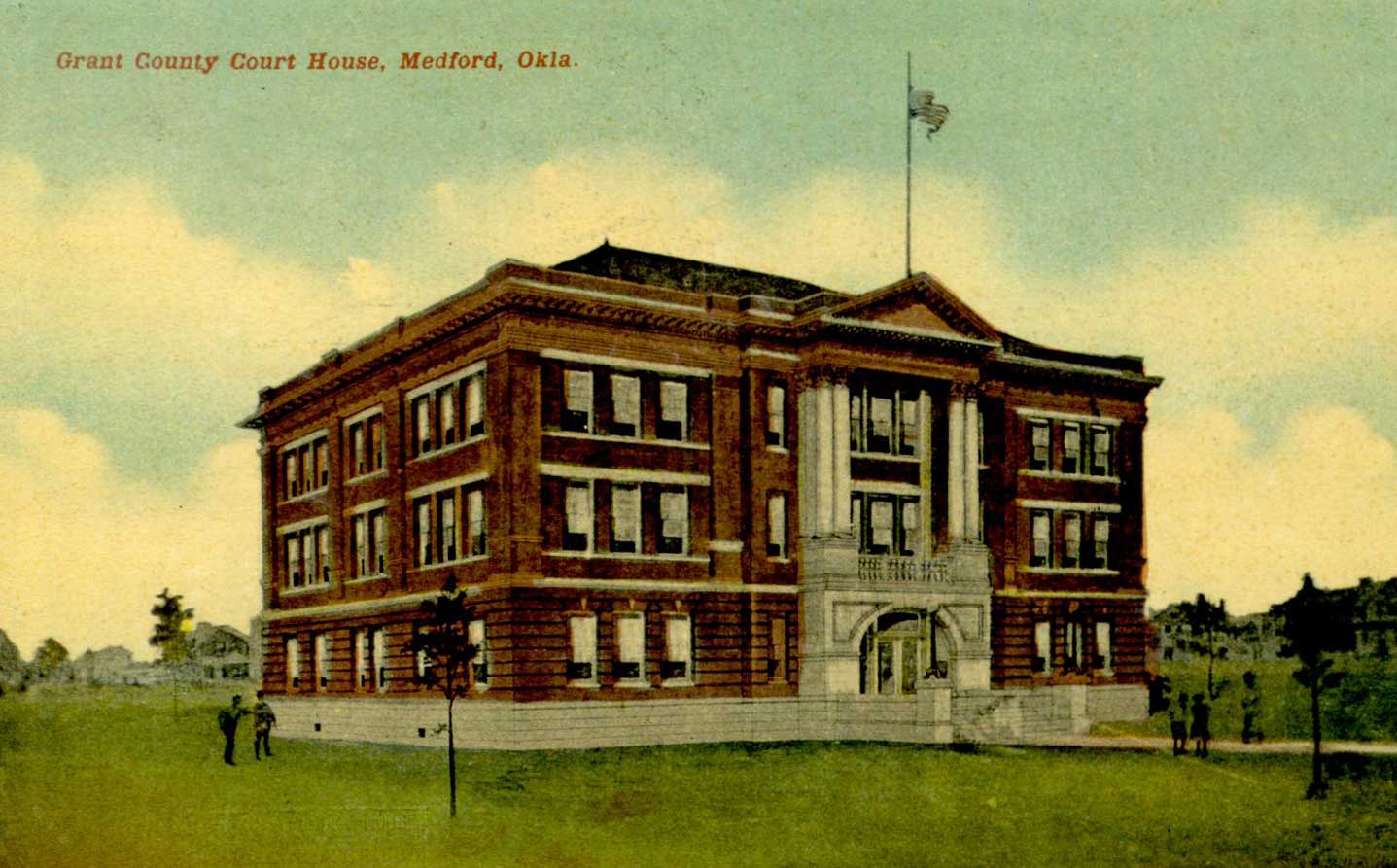 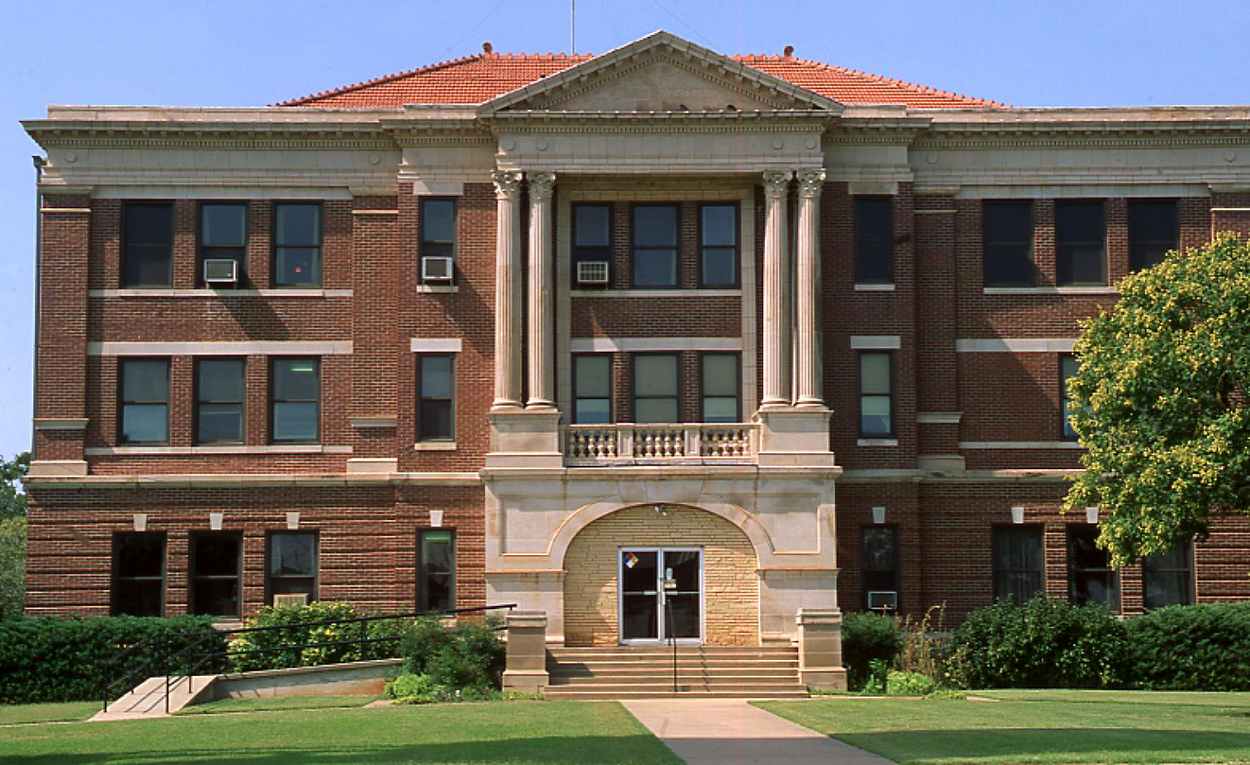 Grant County, located in north-central Oklahoma, lies in the most northern tier of counties bordered on the north by the state of Kansas. Surrounded by Kay County on the east, Garfield County on the south, and Alfalfa County on the west, Grant County has a total of 1,003.61 square miles of land and water. Situated in the Red Bed Plains and in the Great Salt Plains, the area is noted as a wheat-growing region. The grassy plains are drained by the Salt Fork of the Arkansas River, which flows from west to east in the southern half of the county. North-south tributaries such as Pond, Deer, Osage, and Crooked creeks flow into the Salt Fork. The Chikaskia River originates in the county's northeastern corner, crossing west to east into Kay County. Grant County is included in an area of Oklahoma that is one of the state's least studied by archaeologists. There are nine known archaeological sites. Surveys have provided the conclusion that the area was occupied during the Archaic (6000 B.C. to A.D.1), Woodland (A.D. 1 to 1000), and Plains Village (A.D. 1000 to 1500) cultural periods.

Early explorers in the area of future Grant County included George C. Sibley and Nathan Boone. In summer 1811 Sibley made an excursion to the Great Salt Plains along the Salt Fork of the Arkansas River while visiting Osage villages in present northeastern Oklahoma. In 1843 Nathan Boone led an expedition from Fort Gibson to explore the Great Salt Plains. Both men recognized the commercial benefits of the salt deposits.

Grant County was initially part of the Cherokee Outlet, owned by the Cherokee Nation. Following the Civil War (1861–65) the Outlet became a rancher's paradise. Cattle companies, such as Williamson, Blair and Company of Kansas City, soon leased large sections of the Outlet from the Cherokee. In the late 1860s an individual named Sewell built a stockade (later known as Pond Creek Ranch) near present Jefferson as a haven for travelers and cattle drivers. Between 1867 and 1884 cattle drives originating in Texas passed through the area via the Chisholm Trail. Beginning in 1879 settlers called boomers clamored for the opening of the area to settlement. Between 1879 and 1884 Charles C. Carpenter and David L. Payne led several groups on excursions into the region to establish colonies. Although their efforts were thwarted, the publicity that was generated brought the situation to national attention, and the Cherokee Outlet was opened to non-Indian settlers on September 16, 1893.

Prior to the land opening the Department of the Interior had designated future Grant County as L County, with a county seat at Pond Creek. After the opening, communities such as Deer Creek, Jefferson, Lamont, Manchester, Medford, Nash, Pond Creek, Renfrow, and Wakita sprang into existence. In 2010 they continued as incorporated towns. During a general election held on November 6, 1894, voters named the county after Pres. Ulysses S. Grant. Centrally located within the county, Medford became the county seat through an election held on May 27, 1908. County officials met in temporary quarters until the Grant County Courthouse was constructed. Dedicated on July 4, 1910, it is listed in the National Register of Historic Places (NR 84003027).

The Grant County area has evolved from hunting grounds for American Indians and range for cattle owners to a prominent wheat-growing and livestock-raising region. At 1907 statehood the principal crops included wheat, corn, oats, alfalfa, and forage sorghum, with estimated value of $3.5 million. Farmers and ranchers had more than fourteen thousand each of hogs and cattle as well as almost thirteen thousand horses. A county commissioners' annual report for 1911 indicated that Grant County had 3,143 farms, of which 2,041 were owned by the occupants. In 1930 Grant County had 2,757 farms, with the average size farm being 242 acres. Almost 50 percent of the farms were operated by tenants. In 1963 farmers reported that 278,300 acres were planted in wheat, and livestock numbered 55,500 poultry, 50,000 head of cattle, 29,300 sheep, and 14,300 hogs. At the turn of the twenty-first century 584,588 acres were divided into 688 farms, with the average farm being approximately 850 acres.

In addition to agriculture Grant County's economy has been supplemented by some manufacturing and by the oil and gas industry. In the early 1920s oil and gas were discovered in the eastern part of the county near the Blackwell Field. On April 24, 1921, the Swaggart Number One, the first oil well in Grant County, was drilled near Deer Creek. At the turn of the twenty-first century the county reported seven manufacturers compared to twenty reported in 1930.

Notable early trails included the Black Dog and Chisholm trails. Beginning in 1889 and 1890 the Chicago, Kansas and Nebraska Railway (later the Chicago, Rock Island and Pacific Railway) constructed a railroad from northern Kansas through Grant County with Renfrow, Medford, Jefferson, and Pond Creek along that line. In 1897 the Gulf Railroad (later the Atchison, Topeka and Santa Fe Railway, AT&SF) connected Manchester, Wakita, Medford, and Deer Creek with outside markets. At the turn of the twentieth century the Blackwell, Enid and Southwestern Railroad (later the St. Louis and San Francisco Railway) passed through Lamont, and the Denver, Enid and Gulf Railroad (later the AT&SF) reached Nash (Nashville). The county is served by State Highway 11, running east and west, and U.S. Highway 81 (Chisholm Trail Highway), running north and south. Other highways include State Highways 74 and 132 and U.S. Highways 60 and 64. In the 1940s the Mid-Continent bus lines had terminals at Medford and Pond Creek.

The following (as per The Chicago Manual of Style, 17th edition) is the preferred citation for articles:
Linda D. Wilson, “Grant County,” The Encyclopedia of Oklahoma History and Culture, https://www.okhistory.org/publications/enc/entry.php?entry=GR009.